I’m finally caught up on all the requests for insights on the three eclipses happening between June 5th and July 5th. Now I can catch everyone up on the news. If you prefer I spend more time writing these fun and informative forecasts and less time on individually tailored reports, Avid Reader Diane invites you to support the work with Faithful Monthly or Joyful Random Expressions of Appreciation. The more support this forecast receives, the more it can return to you, dear Avid Readers and Fairy Godparents and Guardian Angels.

I started writing this forecast on SATURDAY night, which went like this:

After a looooong Moon void in Sagittarius that began at 12:11 AM ET, Moon entered Capricorn at 3:44 PM ET, looking to Make Things Happen in practical, earthy terms. During the void — and arguably motivated by today’s exact square between the Sun (willpower) and Mars (action) — hundreds of thousands of protesters took to the streets in the United States and other nations to express righteous outrage, sparked by the murder of George Floyd by police officers sworn to protect and serve. This is the ninth day of protests; today was the biggest yet — and overwhelmingly peaceful, according to the reports on the Twitter and the papers. Perhaps the relative calm reflected the lull of the Moon void — and its last aspect, which was to Neptune, which diffuses whatever it touches.

With Mars driving the narrative last week — building to exact squares to Venus (social expression) and the Sun, we can see how the headlines would be filled with Martian themes, for better or worse: military might, brute force, courage, crusades, sports, etc. Patterns on SUNDAY were proactive (driven by the needs of the Capricorn Moon), but not so jarring. Moon made easy connections to Uranus and Mars around 7 AM ET and 10 PM ET, respectively; an opposition to Mercury (how we need to think) around 10 AM ET might reflect a challenge to an authoritative initiative because of a lack of sensitivity.

No sleeping in on Monday. Note your dreams and waking thoughts in the morning, as Moon sextiles visionary Neptune. The rest of the morning reflects a focused power play and/or emotional catharsis, as the Moon makes its weekly clash with Pluto. Exuberance or excess follows around 2:06 PM ET, as Moon meets up with expansive Jupiter. Here in New York City, we’re finally moving to Phase One of our COVID-19 recovery plan, as non-essential workers in manufacturing return to work, and retail stores  open for curbside pick-up.

Chill during the void which begins at 2:06 PM ET and remember that crisis which crop up are usually of no consequence. Moon reboots in Aquarius at 8:54 PM ET, looking to network with its besties. A focused and sobering piece of news hits the wires around 11 PM ET, as the Moon meets up with authoritative Saturn.

RANDOM REMINDER: Mercury turns retrograde on June 18th. BACK UP YOUR COMPUTERS NOW.

A few thoughts about last Friday’s Full Moon, which was the first of three eclipses happening over the next thirty days. Here is the chart, set in Washington, D.C. 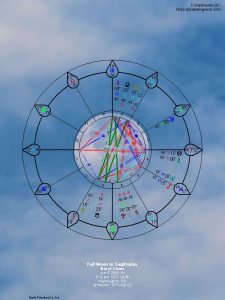 The focus of this eclipse for the U.S. is in matters of mindset and collective belief systems — whatever gets the message out. Foreign affairs are also a focus. The Moon and Sun’s next aspects are to Mars, so we see the potential for action based on empathy (Mars is in Pisces). After that, both Sun and Moon will square Neptune — and Mars will meet up with Neptune after that. So — in the aftermath of assertion/aggressive, the next step is likely to involve all that Neptune symbolizes: vision, healing, ideals; oil, oceans, film, drugs; spirits of all kinds — and lie, lies and more lies.

The chart is ruled by Venus retrograde — rethinking how we are seen and the values we share with others. The leader of the nation is symbolized by the Moon (ruler of the chart’s 10th house). The Moon is opposed by the Sun and squared by Mars — and eclipsed, thank you very much — so we see the potential for much to be revealed and released.

The Sabian Symbols for this eclipse are — for the Moon at 16 Sagittarius: “seagulls watching a ship”; for the Sun at 16 Gemini:  “a woman suffragette orating.” We last encountered this pair on the New Moon of December 2018. It’s quite curious to be reminded that the December 2018 New Moon happened on a week with a Mars-Neptune conjunction, just like this Full Moon. Here’s Blain Bovee‘s take on how to apply these Symbols — pulled from that December 2018 forecast:

I am so fascinated by these Sabian Symbols. If you are not familiar with their history, here’s a link.

You are personally affected by Friday’s eclipse if you have a planet or angle around 15 degrees of Gemini, Virgo, Sagittarius or Pisces. Case in point: Anthony Brennan III — who has Venus at 15 Virgo. We can appreciate how his ever-critical/rarely satisfied perfection-seeking social expression would be provoked by transiting Mars last week, leading to an outburst on a Maryland bike path. He was captured on video assaulting teenagers who were posting flyers designed to raise awareness of the murder of George Floyd. The video went viral; Brennan was arrested and lost his job. There’s more to come for Brennan in the aftermath of the next eclipse on June 21st, as that one will affect his natal Saturn. Astrology is amazing.

I’ve been meaning to write about events that happened over a week ago, as the synchronicity of actual headlines with planetary patterns was so perfect. For example, the forecast for May 27th was:

Moon enters Leo at 2:33 AM ET, looking to shine and help others shine, too. Such efforts may be thwarted around 5:42 AM ET, as Moon is opposed by Saturn, seeking to impose impersonal group-think controls upon someone’s sense of regal entitlement.

Also driving that day was Venus retrograde — still in effect through June 25th — suggesting that social graces would be thrown under the bus and true colors would be seen. The headline reflecting the action just after 5:42 AM ET was this one from Variety:

Two CNBC anchors had a fiery exchange sparked in part by the grim milestone that the nation has surpassed 100,000 deaths due to the coronavirus outbreak

The full “fiery exchange” between anchors Andrew Ross Sorkin and Joe Kernen is posted here — and it is a worthy case study of planetary patterns brought to life! See how the words in the Variety story reflect planetary patterns? Amazing!

Remember that the week before last was a tipping point. George Floyd‘s casual murder by a callous police officer was one of several significant “last straws.” Another was Twitter, which finally pushed back against the lies and violent statements on P45‘s feed (for which any other Tweeter would — and has been — suspended, including one user whose tweets are exact replicas of P45’s). That being said, for the first time ever, Twitter fact-checked a P45 tweet about mail-in voting, adding a label warning users that the tweet was false. This happened when Mercury was at the Aries Point. Translation: words themselves are likely to be prominent — and they were! Here’s another one: “Facebook Employees Stage Virtual Walk-out to Protest P45’s Posts.”

Other tipping points — many with a Mars theme (sports, warriors, etc.):

UPDATE: on P45. When the protests in DC broke out last Monday, the White House went dark. It was reported that P45 was “rushed” by the Secret Service to an underground bunker. #BunkerBoy became a trend on Twitter — and yesterday Randy Rainbow released his latest creation with the same name.

Presumably upset at being laughed at for hiding in said bunker, trusted advisors came up with a plan:  in order to clear a path for P45, have law enforcement assault Australian journalists on live TV, then tear gas peaceful protesters and evict church staff at St. John’s Episcopal Church.  Then stride over from the White House with an equally white entourage and hold up a liberal edition of the Bible (yes, really) — upside down — in front of the church. If Hope Hicks did hatch this plan — as some said — credit her Mars at the Aries Point being activated by transiting Mercury and the North Node (ideas and action make a prominent public impact).

Hiding in a bunker. Holding up a Bible. Where do we see this potential in P45’s horoscope? I’ll tell you.

On May 26th, transiting Neptune made the first of a series of squares to P45’s North and South Node. The next one happens on July 20th; the last one happens on March 14th. Neptune is verrrrrrrry close to a square to P45’s Gemini Sun and Sag Moon, and while those won’t be exact until Spring 2021, they are in effect now.  As an example of what these contact might look like, recall rapper Kanye West’s bizarre performance in the Oval Office back in October 2018.

Neptune dissolves what it touches. It suggests a wipe out. The Nodes refers to relationships, groups and fate. We see a potential meltdown in relationships, as P45 is abandoned by some — while bonded with others through “spiritual sharing” (argues astrologer Noel Tyl). Neptune is a useful inspiration for artists, messiahs and snake oil salesmen.

As Avid Readers will recall from my post on January 6th, P45 is entering another period of Mars action. Dates: June 8th, 13th and 16th. Transiting Mars will square his Uranus, Node-Moon and Sun, respectively. We see the potential for daring/reckless initiatives.

In July, Mars opposes his Neptune on the 7th and Mercury on the 13th. These happen against the backdrop of two supremely intense patterns suggesting a turning of the tables and anguished effort against the threat of loss. Hmmm.

Last week I explained how the U.S. horoscope is entering into a period of development it has not experienced since the Carter Administration. The next day, Matt Bai wrote an op-ed for WaPo called “The Carterization of the Trump Presidency.” Many readers were offended by the comparison, but as you know now, it makes total sense. Coincidence or conspiracy?

I leave you with this high-flying image that aptly reflects last Friday’s Moon in Sagittarius, combined with a cooperative connection between Mercury (messages) and Uranus (technology; space). Planet Labs sells photos of Earth from several satellites it owns; however, it posted this one on Twitter, apparently for the public to share around the world, according to Space.com. It’s an aerial shot of the yellow Black Lives Matter mural on the street leading up to the newly-christened Black Lives Matter Plaza in Washington, D.C. — near the White House.

Thank you, Planet Labs — and thank you for reading this forecast. 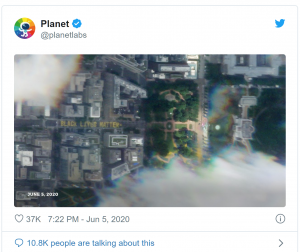 “We stand in solidarity with the Black community

and all people of color who are peacefully

voicing their anger and frustration

at having their voices ignored for too long,

Planet supports the equal treatment of

all people and believes that we must all

stand up and speak out for openness,

inclusion and social justice. Only through

collective unity will the voices of our friends,

our family and our entire community

be heard. Bias and discrimination have

no place in this world. Planet stands with

those seeking justice and racial equality.”