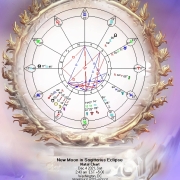 I hope you had a festive Moon in Leo Thanksgiving. Happy Hanukkah, to all who are celebrating. Next up: a total solar eclipse!

This post-holiday work week is driven by the Moon in Libra, seeking fairness, harmony, and balance in relationships. Planetary patterns over the next several days are indeed less jagged than the first half of November, and most of the action happens today and tomorrow. It goes like this:

Here’s where this Saturday’s total eclipse will be visible. Here’s what it looks like, set in Washington, D.C.: 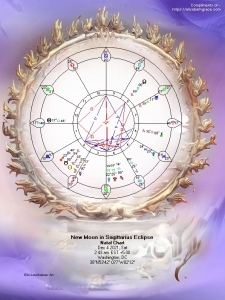 With Neptune in focus over the weekend and for the next few days, I found myself suddenly inspired to design a few options for the 2022 Really Useful Mercury Retrograde Survival Guide Bookmarks. You can thank Beth Owl’s Daughter for the nudge, as I did not have one printed up last year. But Beth asked — so stay tuned — and I hope everyone likes the new design. Inquiring minds are wondering how many other Avid Readers were carried away by the creative/inspiring potential. Do tell!

Last Monday, at the tail end of all those authoritarian patterns involving Mars and Saturn, not to mention the “Big Idea” potential of Mercury with Jupiter and Pluto, Heather Cox Richardson made sure to tell us that

the International Institute for Democracy and Electoral Assistance, based in Stockholm, Sweden, released its 2021 report on “The Global State of Democracy.”

The report identifies the United States as one of the democracies that is “backsliding,” meaning that it has “experienced gradual but significant weakening of Checks on Government and Civil Liberties, such as Freedom of Expression and Freedom of Association and Assembly, over time.”​​

“The United States, the bastion of global democracy, fell victim to authoritarian tendencies itself, and was knocked down a significant number of steps on the democratic scale,” the report says.

It is amazing — and also quite sobering — that mundane astrologers anticipated these events so many years ago. Meanwhile, the Biden Administration has scheduled a two-day virtual summit on democracy, to which 110 nations have been invited. The Moon will be in Pisces; the Sun will be squaring Neptune, so we have the potential for a dreamy vision, empathy, and compassion. Potentially.

Other, much more positive news: U.S. News & World Report lists five things about the economy we can be thankful for right now.

With a week of no exact aspects among the planets (other than to the Moon), we expected events akin to a glacier shelf suddenly collapsing — just like that. Neptune (in partnership with Pluto) refers to viruses/infection — and just like that, we have Omicron, the latest incarnation of Covid — and it’s a variant with a higher-than-we’ve-seen-before transmission rate.

Jack Dorsey stepped down as Twitter’s CEO this morning — just like that. It’s worth noting that Dorsey’s Sun-Mars at 27-28 Scorpio and his Jupiter at 26 Taurus were impacted by the last lunar eclipse…and transiting Pluto-Eris has been hammering his 24 Libra Moon. In 2022, transiting Neptune will activate all the angles of his horoscope, suggesting a possible disappearing act or involvement with intangibles.

Not an obituary, but still in the NYT over the weekend:

Remember how the major trials happening over the past two weeks reflected out-of-control aggression suggested by the Mars-Saturn square? This week, reflecting the s*x scandal potential of Mars-Neptune, we have:

Finally, did you know that the key to happiness is…kindness? This story comes around again and again, but it’s especially apt for days with Neptune (charity; selflessness) so hot in the heavens.

OK, that’s it for now. Here’s the 411 on personal consultations –– and yes, gift certificates for everyone on your holiday shopping list are available. I will be raising my rates in 2022 — if you buy now, you can schedule appointments next year. 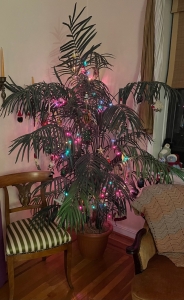 This year’s version of my Moon void Christmas tree