Writing this during the loooooong Pisces Moon void, which began at 8:45 AM ET. It’s been a good day to sleep in and go with the flow. The energy of action (Mars) is diffused by today’s exact meet-up with Neptune, as Neptune — in the language of astrology — dissolves whatever it touches. Mars refers to the military; Neptune can reflect a sense of malaise a.k.a. “meh,” making this combo a lackluster backdrop for West Point’s commencement ceremony (happening as I started typing), especially with the much-ado-about-nothing potential of the Moon void. And indeed, WaPo observed that it “lacked the crackling energy of typical commencements,” citing the coronavirus as a cause. Sure, OK — the coronavirus.

Moon enters Aries at 5:03 PM ET, focused on fulfilling its me-me-me-first agenda. See if you notice the change of pace. The Moon’s path is free of planetary speed bumps for most of SUNDAY, aiding and abetting your favorite Moon-in-Aries crusade or parade.

No sleeping in on Monday. The Aries Moon continues on its quest to get things started, building to a potential power play or catharsis around 6:22 PM ET, as it makes its weekly clash with Pluto.

Reminder: Mercury turns retrograde at 12:59 AM ET on THURSDAY. There is no need to freak out! Just back up your computers and resolve to be patient with any communication, shipping or travel delays. We are supposed to be moving carefully and slowly in this time of monumental change. And yea, verily, even the monuments are changing. Got that?

Most of the stories making the front page last week reflected the fog and mirrors of Neptune’s square to the Sun and conjunction with Mars. Keywords for Mars include soldiers, assertion and cars. Keywords for Neptune include erasure, memory, viruses, illusion, conspiracies, surrender, victims, ideals.

UPDATE: on Taylor Swift, last discussed here back in 2017. This week, she made headlines by calling on politicians in her home state of Tennessee to remove statues that symbolized “hideous patterns of racism.”  In the past, Swift has been criticized for not using her celebrity status to speak up on social and political issues, but no one is accusing her of that now. Looking at her horoscope, we can see how being part of a crusade would be fulfilling, with her Mars rising before her opinionated Sagittarius Sun.

A plethora of planets in the 2nd and 8th houses needs to be concerned with matters of values and worth — not just money, mind you — but social values, too. Her Cancer Moon in the 8th house suggests her personal needs for fulfillment might prefer to be hidden from view, but at 1 degree of Cancer — the Aries Point — it’s hard to see how any effort she makes to provide emotional comfort and security wouldn’t attract attention. Ditto for her unaspected Venus in Aquarius — a mark of a potential humanitarian gone wild. With transiting Saturn on that Venus through 2020, we see how she could take on even more gravitas.

Not only that, but with three planets affected by eclipses — Uranus in December; Moon in June; Saturn in July — we see potential for Swift development this year, both personally and professionally.

J.K. Rowling has sparked quite an upset. Wikipedia introduces the controversy as follows:

On 6 June 2020, Rowling, via Twitter, questioned an article’s use of the phrase “people who menstruate” instead of saying “women”. She went on to write, “If sex isn’t real, there’s no same-sex attraction. If sex isn’t real, the lived reality of women globally is erased”, while saying that she is empathetic to trans people.

Isn’t it interesting that during these past several weeks of heavy Neptune patterns, Rowling would use the word “erased?” Rowling’s comment was made on a conflict-prone square between Sun and Mars, just days after an equally conflict-prone square between Venus and Mars. Sandwiched in between — and potentially dangerously unaware — was an idealistic Sun-Venus conjunction. Venus — as you know — was and is still retrograde, and not inclined to mind its manners.  The response  to Rowling’s comments has been brutal. She was called out by GLAAD, trashed by the famous and not-so-famous. After she posted a long essay on her website, attempting to explain why she said what she said, even Harry Potter cast members weighed in against her.

What in the world is happening in her horoscope?

First, we don’t have a confirmed birth time. We can’t be sure of her Ascendant, though it is reported she once tweeted that it was Aquarius. She is a Leo with an unaspected Sun. We can see how she may have felt like a misfit in her early home life. Five planets in Virgo — including the Moon — would drive her to be perfect, exacting and correct in every detail (the inspiration for Hermione Granger?). Four of those five planets are in a difficult relationship with Saturn in Pisces. We can see how she could have experienced bouts of depression and suffering. But — like Taylor Swift — we also see the potential humanitarian. Rowling’s Venus is conjunct Uranus, which can reflect a need to be a friend to all — especially those who do not conform to “standards.” It may also reflect a rebellious streak.

It’s too bad Rowling didn’t check in with her astrologer that week,  as she would have been advised that intensely assertive efforts were likely to hit a brick wall on June 6th. Better she should have gone for a long walk in the moors! At the end of May,  Rowling experienced a pattern she hadn’t had since 1997 — when Harry Potter and the Philosopher’s Stone was first published. That pattern was a hard aspect to her Leo Sun from transiting Uranus. It suggests a break-out opportunity and a disruption of the status quo. There could be a drive to be true to one’s self — no matter the risk — and here it is again, years later — in 2020. This pattern will be in effect until early 2021.

On May 26th, Rowling released her first children’s story that doesn’t involve anything related to Harry Potter or magic.  The Ickabog seems to be a fresh start — “a political fairy tale,” she calls it. A fresh start is apt for a Uranus cycle. The Ickabog is being published one chapter at a time —  for free on this website. Readers have been invited to submit illustrations for the hardcover book that will be published in November — on the next disruptive Uranus-Sun transit. Hmmm. What do you think might happen?

And what’s going on in your horoscope? Are assertive efforts likely to hit a brick wall or be met with rave reviews? Here’s the 411 on personal consultations. Special shout-out to Avid Reader Barbara, whose Joyful Random Expression of Appreciation prompted me to ship this forecast out today, rather than wait until Monday, when I will post the usual Sneak Peek at the Week. I hope you find these musings fun and informative. Thank you for reading this forecast. 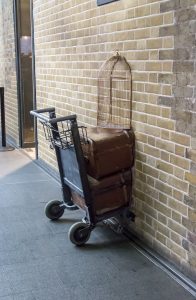