…and off the races we go!

The Moon in Cancer drives the day with a need for emotional security, ideally focused on home/homeland and family concerns. A home-cooked meal with truly nourishing, easy-to-digest ingredients would be an apt start.

Note your dreams this AM, as the Moon is in harmony with Neptune at 10:20 AM ET. By the end of the business day, we’ll be  approaching the Moon’s weekly clash with disruptive Pluto and Uranus, exact at 9:34 PM ET and 5:46 AM ET on TUESDAY. If you must pitch today, pitch earlier rather than later.

Moon goes void TUESDAY on a face-off with Mercury at 11:40 AM ET. Possible theme: tension between those who prioritize sensitivity and security vs. those who say “it’s just business!” East Coasters can take a long Moon-void lunch; West Coasters may sleep in or flake on that morning meeting. At 1:53 PM ET Moon enters regal drama king Leo, an apt backdrop for a State of the Union speech starring P45.

But wait, there’s more. Emotions are building to a crest — released at 8:27 AM ET on WEDNESDAY on the Full Moon. This is the second Full Moon we’ve had this month, which makes it a Blue Moon.  It’s also a Supermoon, so the Moon will be looming large in the sky.  Not only that, it’s a total lunar eclipse, so color it red.  Most of the U.S. will be able to see it. Here’s a map that tells you what time and where.

Eclipses interrupt the regular flow of light and whatever other energy flows from the Sun or the Moon, like a river meeting a dam. This creates a bottleneck of energy that must eventually find a release, usually over the course of a few months’ time.

Eclipses often highlight an area of life where something needs to be brought to a close. Wherever the eclipse falls in your horoscope is where you may experience a bottleneck, followed by a release. That includes secrets. On the upside, this is an opportunity for positive change. Resistance is futile, especially if the karma cops are behind what is being shut down.

Look for 11 Leo (Moon)/11 Aquarius (Sun) in your chart and take note of the house which contains it, and planets or angles that are near it. FYI:  in P45’s horoscope, Pluto will be eclipsed. According to astrologer Celeste Teal, an eclipsed Pluto “brings potential for many changes with the domestic sphere.” Pluto sits in P45’s 12th House, affectionately known as the house of “self-undoing.” It rules the 4th House, which refers to home, family and real estate. Jot down October 13th as a potential trigger date for this eclipse.

Let the record show that the Big Fat Solar Eclipse of Aug 21st at 28 Leo was triggered last week when Mars was at 28 Scorpio. If you have a planet or point at 28 Leo, Taurus, Aquarius or Scorpio, there was likely some action in that area of your horoscope. FYI, we will have another solar eclipse on February 15. It will hit at 27 Aquarius — and will thus also trigger the eclipse on Aug 21st. 27 Aquarius is within one degree of P45’s  28 Aquarius Descendant, a significant relationship point.

As for patterns for the back half of this week, Mercury leaves Capricorn for Aquarius on WEDNESDAY at 8:40 AM ET. It harmonizes with Mars on SATURDAY at 10:58 AM ET. An easy flow between the planets of action and communication suggests an apt time to walk your talk. An exuberant or indulgent potential is added in the days leading up to SUNDAY, when Venus (money, women, art, social expression) and Jupiter (excess) will square. More sexual secrets coming out would be my take, given what happened last fall when Venus conjoined Jupiter.

Moon voids for the rest of the week: THURSDAY 5:58 AM ET until 2:13 PM ET. SATURDAY 2:07 AM ET until 4:47 PM ET. You know the Moon void drill: no impulse shopping; stick to routine; no making mountains out of molehills. Chill!

I promised you stories of shocks to the system in aviation, hi-tech and gender-benders, suggested by today’s tension between Mercury and Uranus:

Let the record show that Aziz Ansari’s horoscope (unknown birth time) suggests he’s bound to shake things up, with his Pisces Sun in a square to rebel Uranus and expansive Jupiter. His Moon is in Cancer — at some point this year or next, it will be opposed by streamlining Saturn. Could be happening any minute now.

What’s interesting in Mr. Ansari’s horoscope is his Mars at 29 Pisces conjunct his Venus at 0 Aries.  This is the Aries Point, and Avid Readers know this suggests strong potential to become known for a yin-yang issue, likely prominently romantic or otherwise surreal. Why surreal? Because the Mars-Venus meet-up is square to nebulous Neptune — also at the Aries Point!! There is strong idealism suggested here, and a likelihood that what is presented is not as it seems…nor clearly understood.

Guess what the patterns were on September 25, 2017 — the night of the alleged date from hell? The Moon was in boundary-pushing Sagittarius, square to a Venus-Mars conjunction in hypercritical/perfection-seeking Virgo…which was in turn opposed by Neptune! How fascinating to see the patterns in Mr. Ansari’s horoscope echoed on this fateful date!

Below is a chart for the evening of the date — I’m using 7:30 PM ET — if anyone has an exact start time, I’ll adjust the chart. Remember, the Moon drives the bus in the horoscope. Where was the Moon headed on this date — and the morning after? A square to Neptune (confusion, fantasy, delusion)…followed by a square to Mars (anger, action)…followed by a meet-up with wet-blanket Saturn in the evening of the 26th (depression, rejection, reality check). 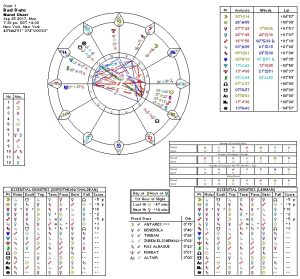 Not only that, but assuming the date started around 7:30 PM ET, the disruptive potential of this event is screamingly obvious by the presence of Uranus on the Ascendant and Pluto on the Midheaven. Venus and Mars — the two parties in this meet-up — are in an area of the horoscope better suited for slavery than romance.  If the date started around 8:30 PM ET, we lose the slavery angle, but the disruption potential remains. And even though the parties involved are moving together, neither is in great shape, so one questions why the two should even bother to try. File under: be careful what you wish for.

Fun fact: on January 15th, the day after this account of the date was published, transiting Saturn squared the Sun in the “Bad Date” chart. Major wet blanket/reality check/ambitious advance indeed.

Moral of the story: if you have a hot date, ask your astrologer to check out his/her horoscope for clues on what to expect. Are the two of you remotely compatible? If you’re planning to set a date for an important occasion, ask your local astrologer to help you choose a time when luck is more likely to be on your side.