On Sunday, I shipped a forecast about Monday’s New Moon in Gemini — here it is, ICYMI. Remember, there are no exact aspects among the planets except those involving a planet and the Moon. What comes to mind is the expression “let loose,” and I imagine we’ll see that reflected in the headlines from now until June  10th, when two planets other than the Moon will finally connect. The June 10th connection is the third in a series of trines between Mercury-Algol and Pluto, suggesting a field day for investigative reporters, especially in matters of power and resources (including gas and oil). The next connection is a conjunction between Venus and Uranus, exact on June 11th. Moon will be in Scorpio and millions may gather around the United States for another March for Our Lives.

Meanwhile, we do have two significant shifts this week: Mercury turns direct on June 3rd and Saturn turns retrograde on June 4th. It’s interesting that the two planets are verrrrrrrry close to an exact square all week, reflecting a certain gravitas in our thinking. Mercury is in Taurus, reflecting a need to think about material security. Saturn is in Aquarius, reflecting a need for structure, authority and necessary controls, as they apply in a helpful way to humanity. That would be the upside. Any planet in Aquarius can reflect a certain rebelliousness that may be on the fringe. Not only that, but as I said in the New Moon forecast, Mercury is sitting at a virtual standstill on the Fixed Star Algol, associated with decapitation and other forms of losing one’s head. Algol is associated with the head of the Medusa, and if you know your Greek mythology, you know that Medusa was a priestess of Athena who was cursed by the goddess for allegedly having an affair with Poseidon (Neptune). Some accounts say that the alleged affair was not consensual, and that if anyone was going to be punished, it should have been Neptune.

You are more personally affected by the weighty potential of the Mercury-Algol square to Saturn if you have planets around 26 degrees of Taurus, Scorpio, Leo and Aquarius. This includes Johnny Depp and Amber Heard, who both have Venus conjunct Algol in their horoscopes, hit by the long lunar eclipses of November 2021 and May 2022. With respect to who, what and how they need to love, the genie is really out of the bottle now, isn’t it? Depp’s Mercury is also conjunct Algol, whereas Heard’s Mercury is at 6 Aries, about to be expanded by transiting Jupiter next week. Plaintiff and defendant rested their cases on Friday; the matter is in the hands of the jury. Verdict: it seems that all the money and success in the world can’t buy love and happiness, and Monica Lewinsky has a few astute observations.

Queen Elizabeth is also personally affected by this week’s Mercury-Saturn tension, as they connect with Her Majesty’s Saturn and Midheaven (authority; public status). She’s certainly seriously in the public eye this week, and plastered all over Stonehenge,  as an historic Platinum Jubilee celebration continues through the weekend.

Beth Owl’s Daughter’s always-in-sync Tarot Card of the Week captures the wish-fulfillment potential of having thoughts that matter.

A pause while we discuss Saturn retrograde. Saturn, is a symbol of authority, karma, structure, and necessary controls. . In Aquarius, Saturn’s controls are easily expressed in matters related to technology, humanitarianism, and networks. Maybe we’ll see a bit about astrology, too. A retrograde planet is an opportunity to look within for whatever the retrograde planet symbolizes. With Saturn, it is authority and response-ability. Now is the time to stop looking to outside authorities to solve problems. Now is the time to consider how you — yes — YOU — can become a more effective authority in your own personal world…and thus more response-able. When Saturn turns direct on October 24th, you’ll have an opportunity to demonstrate your newly-realized authority. One definite opportunity will occur on November 8th, which is Election Day. Here’s how to check your voter registration status. Meanwhile, note that ambitious projects are subject to review when Saturn is retrograde, and thus may be delayed. Plan accordingly, and for more insight, here’s James Burgess with thoughts on the Sabian Symbol for this Saturn retrograde: a hydrometer.

Thanks to Avid Reader Penny for making sure I didn’t forget to mention that the sequel to Top Gun is smashing box office records, and not just because it reflects macho Mars in warrior Aries, expanded by Jupiter in Aries at the Aries Point.…AND…fighter pilots in death-defying maneuvers aptly reflect the death-defying free fall of the “aeroplane falling” that is the Sabian Symbol of yesterday’s New Moon in Gemini. It should surprise absolutely no one that Tom Cruise has Mars at 26 Taurus — conjunct Algol — and square Uranus in Leo. It makes perfect sense that we’d see a sudden surge in matters of derring-do and aviation, right? He also has a precise square between Saturn (real; authority) and Neptune (surreal; spirituality), eclipsed on April 30th. Translation: keep an eye on Cruise for notable news around July 20th and mid-August.

It’s possible that the Moon was within range of Algol when a man disguised as a woman smeared the glass case surrounding the Mona Lisa with cake. The man was sent for psychiatric evaluation. And yes, we can see the potential for this brazen attack in Leonardo DaVinci’s horoscope.

Angels in a Brooklyn church were not as fortunate. Despite multiple security systems in place, callous thieves beheaded statues of angels on either side of a priceless tabernacle, which they stole. If  that story is enough to make you want to crawl under the covers for a nice long nap, you may enjoy this Mars-Jupiter in Aries story about how sleep helps your brain detox and resist aging — with the help of a nifty bit of headgear that can nudge you into slumber. Aries rules the head, doncha’ know….

If you’d like me to present a talk about astrology to your colleagues at the office or other group of like-minded souls, that can be arranged. Email me! 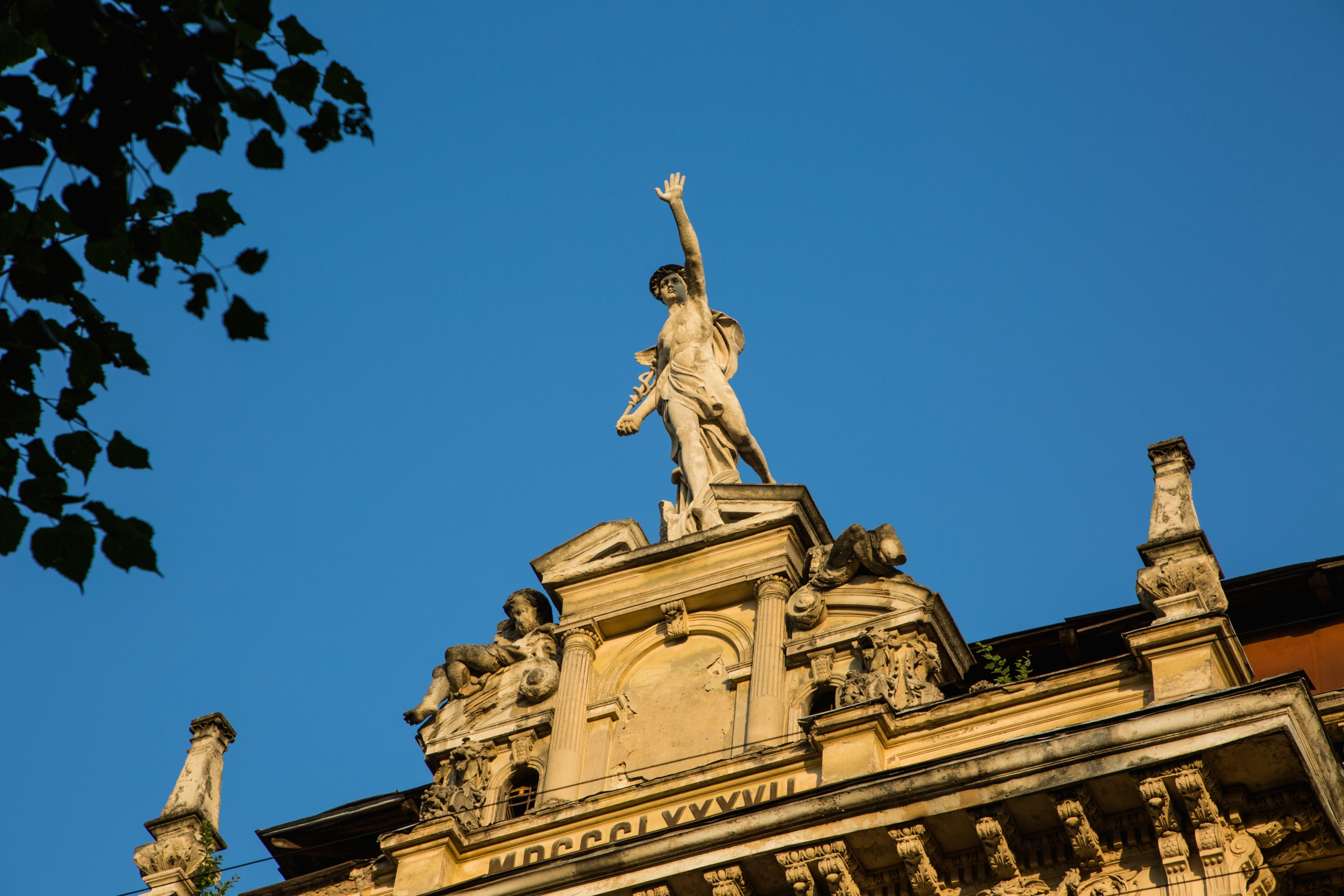 Statue of Mercury –  standing on a building facade in Lviv, Ukraine