Moon is charging through Aries today — seeking to be appreciated for being Numero Uno. So much news to report — had to post — so you could say you heard it here first. I expect power plays as we approach the 6:53 PM ET tension between the Moon and Pluto, followed by conflict/heroism and disruption tomorrow between 6 AM and 7:30AM ET, as the fiery Moon clashes with warrior Mars and rebel Uranus.

First, happy early Mercury retrograde to Avid Readers who wondered why my last email contained two articles I wrote for The Mountain Astrologer.  Those were a gift from MailChimp, which sent them out as email after I added them to the Articles & Interviews page of my website. Not planned, but I hope you enjoyed them.

And now, the news…reflecting this week’s potent patterns:

Last but not least — Matt Lauer — whose horoscope I’ve been following since 2011 — was abruptly fired from the Today show this morning. His 8 degree Capricorn Sun was hit hard by Pluto and Uranus between 2011 and 2013, when he threatened to quit Today unless he received gobs and gobs of cash. He won that battle. The relevant posts are here   and here.  Why was Mr. Lauer fired? Allegations of sexual harassment brought by a co-worker. No sordid details yet.

We don’t have a birth time for Mr. Lauer — I’ve created a chart set just after 12PM, which puts transiting Pluto in a tense square to a hypothetical 18 Aries Ascendant. We know there is going to be some action on two of the four angles of this horoscope for such a cataclysmic event to occur, so this is not an illogical choice. When a birth time is unknown, astrologers will use noon or sunrise. Both options can reveal much.  Here, in this noonish chart,  there’s plenty of action between planets in the natal chart and where planets are right now that would also reflect the likelihood of Something Big Happening. In the chart below, Mr. Lauer’s birth chart is in the inner wheel. The outer wheel shows where the planets were yesterday morning. The yellow lines show how planets in the outer wheel are making contact with planets in the inner wheel.

Even if you don’t know anything about astrology and have no idea what those symbols represent, you should still be able to see that there is CONTACT between stuff in the outer wheel and stuff in the inner wheel. Just as a radiologist makes a living making meaningful sense out of the mysterious (to the average patient) blobs on X-rays and other tests, skilled astrologers invest years of study so they can make sense of the chart below. I’d be surprised if Mr. Lauer consulted with an astrologer this year, but if he had, he would have been alerted to the high probability of an upset to his need to be Number One — and much, much more. Perhaps he would have made different choices. FUN FACT: Mr. Lauer’s horoscope has a challenging aspect between his boundary-pushing Mars in Sagittarius and Pluto (power, persuasion). We’ve seen hard aspects between Mars and Pluto in the horoscope of many men recently outed for sexual harassment. It’s like….wow….there’s a pattern here….and there’s another pattern, too: Aries, 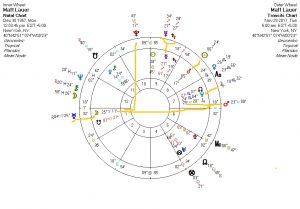 If you find this forecast informative and meaningful, I invite you to support it by supporting the astrologer who writes it. If you are receiving this forecast by email, there is a link at the bottom that will enable you to make a donation, which will be received with boundless gratitude. It thrills me that many of you have been reading this forecast for almost ten years. Wow. Ten years!  Thank you for finding my work meaningful. If you are reading this on my website, here is a link to the Cosmic Tip Jar. And if you’d like to find out what’s going on in your horoscope — so you are not blindsided like Mr. Lauer — here’s the 411 on personal consultations.

Thank you for reading this forecast. Have you backed up your computers yet?