A warm welcome to so many new Avid Readers who found this forecast in a recent article in Well + Good. I do hope you will enjoy my twice-weekly posts on the general planetary flow that affects everyone, with special attention to the astonishing synchronicity of planetary patterns and the news. Stick around; get comfortable with the technical jargon I do my best to translate into plain English, and you’ll never be surprised by a headline again. And when you’re brave enough to find out what all these patterns have to do with your own unique horoscope, I’m here for that, too.

I just added a truckload of other articles to that section of my website, and it’s possible that all of them will be included in this email missive. We’ll have to see what WordPress decides to do.

Most of the weekend is driven by the Moon in Libra — and here’s a reminder:

To the above I would add that we are now at the end of the lunar cycle, sensing that something new is around the corner, but not sure what it is. In this dark of the Moon we may feel listless or restless.  On SUNDAY, the Libra Moon goes void at 4:22 AM ET — and doesn’t enter the next sign until 4:29 PM ET. If you’ve never heard the term “Moon void,” here is a primer. This is not the day for impulse shopping or anything you wish to be of consequence. Stick to routine concerns and don’t freak out over any crisis that crops up.

That doesn’t mean there isn’t a buzz in the air, given the electrifying chart for the New Moon in Scorpio. Set in Washington DC, it looks like this: 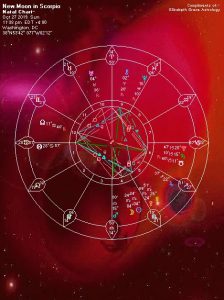 The New Moon is in the 4th House — suggesting that for this lunar cycle, the focus is on depth, substance and control in the core foundation of the country.  The chart is ruled by the Moon at the end of Cancer — suggesting that the die is already cast; we’re just waiting for the report. The Moon is not a happy camper in Scorpio, though it is seen as a fertile placement. What’s interesting is that the Scorpio New Moon’s need for control is literally minutes away from an opposition to rebel Uranus — quite visible in the 10th house (of leadership and CEOs). We are in for public disruption of the status quo — via a rogue, a revelation or a revolution.

We launch this new cycle in the wake of that challenging pattern between warrior Mars in Libra and Saturn in Capricorn. Mars is not a happily placed in Libra, where its crusading drive may be at odds from the peace-keeping needs of the sign of the Scales. Mars in Libra can function like a tornado when it finally lets loose its built-up resentment, and in this New Moon for Washington DC, Mars is strongly placed at the bottom on the horoscope — having just been likely dampened — or advanced —  by Saturn’s authoritative controls. Mars rules the 10th house here — the Fearless Leader. Hmm.

The New Moon is at 4 degrees of Scorpio and it is likely to trigger events that occurred on the July 2018 eclipse at 4 Aquarius, which was conjunct Mars. Hmm. Pay attention to what gets started this cycle, as it will likely advance significantly on the January 24th New Moon and again on the New Moon on April 22nd. If you have a planet or significant point in your horoscope around 4 degrees of Scorpio, Taurus, Aquarius or Leo, you are more personally affected by the break-out potential of this New Moon. Translation: if you have a birthday around the 27th of October, January, April or July.

Whatever day you were born, a New Moon offers an opportunity to reset intentions for the next 30 days. Maintain your focus in your own personal world, even though the rest of the world may seem to be falling apart. It’s supposed to be falling apart at this time, so we can put it all back together with a new set of values. Meanwhile, do your best — and be kind. Got that?

The Sabian Symbol for this lunation is: “A massive rocky shore resists the pounding of the sea.” We usually turn to Blain Bovee for further insights, but in the spirit of the disruptive Sun-Uranus opposition, let’s do something different and  see what Lynda Hill has to say. She has written much about the Sabian Symbols, and as you can read in the preceding link, but the essence is that wherever this degree falls in your horoscope is where you may experience a test of endurance — or a stubborn resistance to change. If you have been following recent headlines out of Washington, you can see how that crisis is likely to develop in this lunar cycle.

You may recall that on Monday I wrote that annual opposition between the Sun and Uranus would likely be reflected by headlines this weekend involving shocks, seismic activity, technological breakthroughs, astrology, rebellion. I’m thrilled to tell you that once again, the New York Times is happily proving the accuracy and validity of astrology even as it sniffs its nose at it. From the Sunday NYT:

As for breakthroughs, shocks and other disruptions (there will be more over the next few days), etc:

And speaking of Uranus, Rudy Giuliani (who was born with the Sun conjunct Uranus) disrupted Friday’s newsfeed when he butt-dialed an NBC News reporter, inspiring the hashtag #ButtHisVoicemails. We’ve written about Giuliani’s horoscope several times before. It’s fascinating how often people making news under a particular pattern will have a similar pattern in their own horoscope.

UPDATE: Justin Trudeau did prevail in an extremely close election on Monday. His Jupiter return — suggesting good fortune and favor — prevailed over the streamlining squeeze and upsets he’s been experiencing all year from other heavies in his horoscope. True to the squeeze, his wings have been clipped, as he will lead a minority government in the ensuing months. And the heavies in his horoscope suggest further streamlining at least through November. December should feel more expansive, when Jupiter conjoins his Capricorn Sun. Here’s an article I wrote about Trudeau’s 2019 prospects in Mountain Astrologer back in May.

Meanwhile, remember how I said planetary patterns were apt for clandestine activities, with a militant and disruptive flair? Well, P45 just hinted at “something very big just happen [ing]” — and the Twittersphere thinks it’s probably a military operation in the middle of night in Syria. In other news, as predicted months ago, P45 continues to push boundaries and get away with it (for now), redefining the boundaries of the U.S. southern border (sorry, Colorado), while one of his lawyers actually tried to convince a judge that if P45 ever did shoot someone on Fifth Avenue, he could not be charged with a crime for as long as he stayed in the White House.

Elsewhere, it was a tough week for many House Republicans  — especially during Wednesday’s Leo Moon void. You will recall the forecast for that day suggested a regal effort that would turn out to be much ado about nothing, with focus resumed once the Moon got itself into gear in Virgo. That morning,  Rep. Matt Gaetz (R-FL) stormed into the secure chambers with a bunch of his colleagues, disrupting the Democrats’ effort to move forward with  their  impeachment inquiry interviews. The Republicans’s objective: to protest rules of procedure that they themselves established in 2015, which the Democrats are now following, as Fox News analyst Judge Napolitano helpfully explains. But storm they did, filled with regal indignation — but not much focus or consequence, with the Moon being void, right?

The unexpected twist in their efforts to move forward in a straight line was the flak they received by taking their cell phones into the secure chamber, putting national security at risk. I know, I know….but her emails! After a while they ordered pizza and fried chicken and sat around until…just before 3:30 PM ET, when they all wandered off for tea — or maybe it was a vote. Whatever. The chamber was now clear; the Moon was fully in Virgo, ready to clean up the Leo Moon drama queen party confettie. And the impeachment inquiry got back underway, with another brave witness who defied White House orders not to appear. The Democrats were smart to simply chill while Matt’s motley crew had their lunch, sensing intuitively perhaps that crises that crop up during voids are usually much ado about nothing. And if you’re reading this on Sunday, know that the Moon is void — and respond to twists accordingly. Chill!

Ohhhhh and this just in…P45 is going to make a statement on Sunday at 9 AM ET about whatever “big something” just happened. Oh, and he’s doing it right before the militant Mars-Saturn square is exact. I don’t think he’s going to announce he’s sending every U.S. taxpayer a check for $300. Mind the void — even as you review this bit from September 13th “Avid Readers will recall that October is when transiting Jupiter will activate P45’s Sun and Moon for the third and final time this year. The first hit was in February — and here’s what happened then. We can anticipate similarly expansive and persuasive actions from P45 in last ten days of October.” Transiting Jupiter squares P45’s Sun on October 29th, followed by transiting Mars conjoining his Jupiter on October 30th. Big indeed.

Ohhh there is so much more to talk about — the World Series, Tulsi Gabbard not running for Congress, Jane Fonda accepting an award while being arrested; Francisco Franco being dug up after spending so many years in the grave.  Their horoscopes are hot, and that’s why they are making news now — and yes, horoscopes keep functioning as designed, even when you’re six feet under.

What’s going on in your horoscope? That would be a fine discussion indeed.