Arise, go forth and get down to business, driven by the Moon in enterprising Capricorn as of 8:47AM ET. There’s a heady idealism in mindset and communication, suggested by a meet-up between Mercury and the Sun in Aries which occurred just after midnight. This could be highly persuasive (Aries is indomitable), even if it does require a revision down the road (Mercury, when so close to the Sun, can be blinded by the light — unable to receive input from any other Source). Classical astrologers define planets conjunct the Sun as combust.

There’s no Moon void on Saturday to dissuade you from accomplishing your weekend chores. Have at it, being mindful of the potential for upsets and power plays in the hours between 11AM and 3PM ET, as the Moon makes contact with Uranus and Pluto.  Just before midnight ET on Saturday we’ll have the 3rd Quarter Moon, presenting another bit of light regarding the agenda you set on the New Moon a few weeks ago.

On Saturday we’ll also see Venus (arts, women, social expression, values and money) leave Taurus for Gemini at 11:29AM ET. In Gemini, Venus can be oh-so-charming, seeking social expression by being informed, intense and entertaining — and able to love both sides of the same coin — or several coins at once. Is that fickle?

Sunday morning is lovely for sleeping in, as the Moon will be void between 4:15AM and 1:44PM ET. There’s pixie dust in the air, helpful for artistry and healing, suggested by a cooperative connection between Mars and Neptune. This patterns also supports fantasy and showbiz types, including those who might want to sell you a bill of goods. Don’t buy it during the Moon void.

After the void, the Moon enters Aquarius, favoring gatherings of friends, especially with such an easy connection to the aforementioned chatty Venus in Gemini at 4:08PM ET. The menu might be quite exotic, as well as your guests.

Surprise, surprise — there may be a new presidential candidate in town, as the NYT reports that Lincoln Chafee, the former Republican senator from Rhode Island, who then was elected governor as an Independent, is exploring a run — as a Democrat. Mr. Chafee is a pioneering Aries with Moon in Leo — birth time unknown, though I do have a few ideas about why we are seeing this expansive/ambitious reach now.

What we can see clearly in his horoscope is unconventional Uranus running wild (Barack Obama has this pattern, too). No wonder he defies description — and the status quo. As a US Senator, he voted against invading Iraq. This need to buck the trend is being supercharged by Uranus, Pluto and last Saturday’s Full Moon/Eclipse. Assertive Mars is also active now, by transit and by solar arc — there’s the need for action now.

Elsewhere, more startling revelations in communication from Alex Millard, a woman who posed as a man on Twitter for just one week and found herself being retweeted and favorited for what she had to say, instead of being the recipient of rape threats and insults about her weight. Her opinions were even picked up by a media outlet, too — imagine that. Which reminds of comedian Hannibal Buress — a person with a Y chromosome. Funny how only after he called out the numerous rape allegations against Bill Cosby did people start taking seriously what dozens of women had said before. Ohhhhh if only that were funny.

In other news of breakouts and triumphs for equality no matter how unconventional you might be (Sun conjunct Mercury-Uranus in Aries square Pluto in Capricorn, thanks very much), score one for Tamara Lusardi, a transgendered woman who just won a discrimination suit against her employer, the US military. As I’ve opined before, these suits reflect the opportunity to take the seeds of civil rights planted during the Uranus-Pluto conjunction of the mid-60s to the next level. They also stretch and challenge whatever notions we may have about gender and identity, arguing for a paradigm shift that overturns the status quo…

Which reminds me of a conversation I had recently with a woman well-versed in Tarot who wanted to better understand the potential of Uranus square Pluto. Here’s what I showed her: 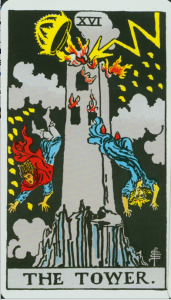 …and here’s what Tarot sage Beth Owlsdaughter has to say about this powerful card (I can’t wait for her to finish her book).

Have a wonderful weekend….and meanwhile, if you’re passionate about understanding why you are the way you are…what you need in order to live your life to your fullest potential…how you can better understand the significant others in your life…what opportunities are likely to present themselves this year…or even how you can use astrology to better manage your co-workers at the office, here’s how you can contact me to schedule a consultation.