A high-flying Moon in Sagittarius continues to drive the day, seeking to push boundaries and expand minds ever so righteously. Optimistic, seed-planting, tell-the-whole-world energy is aided and abetted by two helpful exact aspects. Venus (social graces, women) and Saturn (ambition, structure, authority) are in an easy alignment; so are Mercury (mindset) and Jupiter (expansion, reward). Make the pitch!

Hang with your besties and think outside the box this evening, as the Moon aligns with innovative Uranus and Jupiter at 7:22PM ET and 10:18PM ET, respectively. Then the Moon goes void until 7:21PM ET on SATURDAY.

Hold off on impulse shopping and chill until the Moon engages in practical Capricorn on Saturday night. Conventional wisdom argues that purchases made when the Moon is void of course will likely prove to be not as useful as you hoped.

Sunday morning’s practical, make-it-happen energy is tinged with a dreamy indulgence, as the Moon makes contact with Neptune and Venus at 8:26AM ET and 9:32AM ET.  You can use the rest of the day to plan strategy for world domination, or fortify your castle. At 8:37PM ET be aware that the Moon will meet up with Pluto, suggesting a potential power play or emotional catharsis. Moon clashes with Uranus at 3:10AM ET on Monday, suggesting an upset to the status quo likely making headlines.

No dawdling on Monday. Planetary patterns facilitate an easy flow of action until 3:53PM ET, when the Moon goes void for the rest of the business day.

To find out how these planetary patterns are reflected in your horoscope, schedule a personal consultation. You’ll understand why you are the way you are, why things happen when they happen and how to maximize opportunities now and in the future. But don’t just take it from me — consider these testimonials.

With Mars at the Aries Point — i.e., at the first degree of Aries, Cancer, Libra or Capricorn — we expect headlines reflecting the assertive/warrior energy of Mars to become prominent. In this case we have Mars at the first degree of Libra, and yesterday I could not bring myself to put into cyberspace what carnage I anticipated we’d see in Friday’s headlines. And yet, the carnage is there — and it has an aura of prominence. Astrology is amazing.

First, the United States is “reasonably certain” that a drone strike killed “Jihadi John”, the notorious executioner. Beirut experienced a double suicide bombing that was “the worst attack on the city in years”. More acts of war: “Kurdish Forces Retake Iraqi City of Sinjar from ISIS.” Also:   “The Attacks Will Be Spectacular” is Friday’s headline in a Politico exclusive that reveals how the CIA “repeatedly and urgently” warned the White House of an anticipated strike against the US, starting in the spring of 2001. Well, in the light of Wednesday’s New Moon in Scorpio, we did expect secrets to be exposed.

Guns and cars are also ruled by Mars. “How Gun Traffickers Get Around State Gun Laws” is on the NYT homepage. Over at the The Guardian, you can read how one of Google’s self-driving cars got a traffic ticket. Even the presidential campaigns are being reported as more combative. There’s a Democratic debate tonight, the second in a row which is not happening on a weeknight. Coincidence or conspiracy, media mavens? The NYT headline asserts that Bernie Sanders’s strategy will be to “Attack Hillary Clinton, If Asked”.

Meanwhile, in Republicanland, the Washington Post reports, “After pulling punches at the debate, GOP candidates take the gloves off“, with Donald Trump calling Ben Carson “pathological, “comparing him to child molesters. Ted Cruz and Marco Rubio were also on the offense.

Is there anything positive to report? Yes! Earlier this week, a judge in Utah made headlines by ordering a lesbian couple to give up their foster child because he’d read somewhere that children are better off when raised by heterosexual parents. Much outrage ensued, including the State of Utah’s, and today, under the rational and supportive connections between Venus, Saturn, Mercury and Jupiter, the judge reversed his order. However, he is still concerned by the research, and a hearing is scheduled on December 4th, during a Moon void and a square between Mercury and Jupiter. This ought to be of no consequence, if the judge gets his facts straight, no pun intended. If you’ve been reading this forecast for over a year you may remember a study from last summer concluding that actually, children raised by same sex parents “are happier and healthier than their peers”. Tell it to the judge.

Meanwhile, here are two stories reflecting the “small is big” potential we’ll see through 2016, as Jupiter (big) travels through Virgo (small). “After a Mass Extinction, Only the Small Survive” and “The Microcomplaint: Nothing Too Small to Whine About”, the NYT wants you to know. Does Jupiter in Virgo also reflect a story about how a tiny chip of carbon was valued at $48 million — purchased at an auction by a billionaire who wanted to give the famous (prominent!) flawless blue diamond (now known as the Blue Moon of Josephine) to his seven-year-old daughter? Factor in Venus and Mars entering Libra (things of beauty) and other planetary patterns, including the reality-melting potential of Saturn square Neptune….

…which is an excellent pattern to facilitate stories all over the place about the 150th anniversary of “Alice in Wonderland”. This article is from the Sunday NYT travel section, travel being an excellent focus when the Moon is in Sagittarius. I suppose the “mysterious space junk,” seriously known as “WTF”and  plummeting to Earth today qualifies, too. Certainly it being Friday the 13th is not a factor. 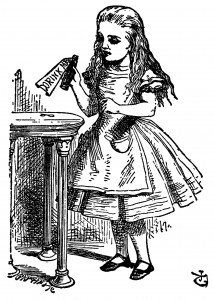