While I was away, the squirrels built a nest in the elm tree outside my window. It’s just a few feet above eye level, providing endless entertainment for the cat. I wonder how the crows will respond to their new neighbors when they return to the tree this winter.  Can’t they all just get along? Meanwhile, I savor these simple joys. I hope you find some to savor, too.

That chatty piece of news was brought to you by the Moon in info-junkie Gemini, seeking to keep you entertained and informed. As I type, the Moon is about to connect with bewildering Neptune, leaving me to wonder what new strain of batshit craziness will be making headlines around 8:35 AM ET, especially given Mercury in retrograde. After the delusional dust settles, the afternoon is energized by the Moon’s harmony with action hero Mars and expansive Jupiter, exact at 3:29 PM ET. Much can be accomplished (within Mercury retrograde parameters). Be advised that the Moon’s engaging drive may be blocked as we move into the evening, when Saturn in Sagittarius (media, opinion) opposes the Moon at 9:40 PM ET. Who’s trying to control whom?

On THURSDAY, you can get away with sleeping in or flaking out, as the Gemini Moon will be void between 9:38 AM and 12:13 PM ET. After that, the Moon shifts gears into Cancer, the sign it rules. A Cancer Moon supports a focus on emotional and home(land) security; feeding and nurturing the soul; apple pie, Mom and amber waves of grain.  Thursday afternoon has an easy flow of input from other planets. This flow continues until FRIDAY at  4:45 PM ET, when the Moon is opposed by ruthless Pluto. I expect a power play in the headlines late Friday night — one that pushes boundaries, given that the Moon will square (challenge) expansive Jupiter at 8:52 PM ET.  Further upsets to the status quo are likely to hit the wires around 11:17 AM ET on SATURDAY, as the Moon is squared by rebel Uranus.

Meanwhile, along with Mercury retrograde and the revealing fallout from last week’s Full Moon eclipse, Venus is the star player in the cosmos this week. Yesterday, the only exact pattern of the day was a face-off between Venus in sensitive, nurturing Cancer and Pluto in ruthless, Powers That Be Capricorn, exact at 7:13 AM ET.  Early THURSDAY AM (or Wednesday eve, depending on your time zone), Venus will square Jupiter at 2:40 AM ET.  Here’s a blurb about Venus-Pluto patterns from a post in 2014:

Reflecting this week’s volatile connection among Venus (money, women, social expression, art) with ruthlessly empowering Pluto on Monday and rebel Uranus on Friday, I offer the following items. In Virginia, former governor Bob McDonnell and his wife are on trial “for conspiring to use his office for personal enrichment”. Their defense strategy: their marriage was so broken, they could not have conspired their way out of a paper bag. Holy dirty laundry, Batman — and you’ll hear every sordid detail if you follow this trial. Hard Venus-Pluto contacts suggest emotional overkill. In this category, may I suggest this amusing report in response to the recently-released trailer for the infamously tawdry 50 Shades of Grey. And while we’re on the subject of passion in the arts, here are some artistic crimes of passion, courtesy of the Washington Post.

Venus-Pluto contacts also suggest purging and catharsis, and isn’t it interesting to see this article about how to energetically cut ties with unhealthy relationships, which the protagonist in 50 Shades of Grey obviously never read. The visualization technique is especially apt for clearing emotional/spiritual attachments to people from whom you have already physically separated.

Venus will challenge Uranus on August 24th. Its disruptive, freedom-seeking drive is part of the New Moon/solar eclipse we’ll have on August 21st. Prominent break-ups in the news? I wouldn’t be surprised.  Venus-Jupiter aspects suggest abundance or wretched excess…are we seeing any of that in the news yesterday and today? Hmmm…

Let us remember that the Moon was in double-talking Gemini yesterday, a sign which can’t help but see two sides in any given situation, even if the sides happen to be Right and Wrong. P45 is a Gemini, and his aptitude for double talk and delusion is amplified by a tense aspect between Mercury (how he needs to think) and Neptune (lies all lies). Given the emotional overkill of Tuesday’s Venus-Pluto opposition and Mercury being retrograde (motto: silence is golden; think twice before you hit SEND), of course it makes sense that right after that Venus-Pluto opposition, he would tweet a cartoon of a “Trump train” smashing into journalist labelled “CNN” — and then delete it minutes later. And we can see why, in his stinkbomb of a press conference that afternoon, he would blame “violence on both sides” (re: the weekend’s white supremacist rally in Charlottesville), as jaws around the country fell to the floor. And we can see, under the Venus-Jupiter square, the wretched excess of his follow-up statement that many attending the white supremacist rally were “very fine people.” I wonder what that means, “very fine people.” Does it mean that they have families and pets that they love? That they pay taxes?  That they voted for him? What makes people “very fine,” in the World According To P45?

Meanwhile, Adolf Hitler’s horoscope is functioning as predicted here last December.    It is interesting to note that Hitler’s Venus-Mars conjunction at 16 Taurus is square to controlling, authoritarian Saturn (reflected in his militant values and actions). This conjunction was hit by last week’s Full Moon eclipse at 15 Leo/Aquarius and was triggered by transiting Mars at 15-16 Leo at the time of the Charlottesville rally.  We would expect action taken in matters expressing Hitler’s values and action. Ya think? On the upside,  his values and actions sparked a response on Twitter that set a new record for most-liked tweet ever (no, it’s not one of P45’s).

Where’s Thich Nhat Hanh and his teachings on compassionate listening when we need him?

There is another pattern humming in background that I’ve been meaning to discuss, as it has been reflected in a number of headlines involving drugs, music and technology. Back in 1993, Uranus (technology, avant garde, disruption, rebels, astrology, uranium, aviation) and Neptune (drugs, dissolving of boundaries, water, oil, oceans, lies, dreams, fantasy, music, spirits of all kinds) met up in Capricorn (the Establishment, the color black). Here’s what that looked like: 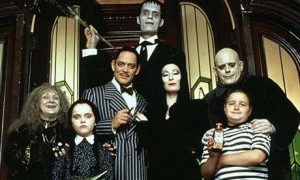 Kooky spooky ooky. Very Goth. But totally connected, right?  In the way technology (Uranus) has dissolved boundaries (Neptune), enabling us to all be connected. In the early 90s — and especially 1993, when three Uranus-Neptune conjunctions were exact — at 18 and 19 degrees of Capricorn — seeds were planted that would dissolve boundaries in corporations and government, using the wonders of modern technology.  So now we have things like “virtual offices” and friends we meet on Facebook (scattered around the world).  The hallowed rungs of the corporate ladder aren’t where they used to be, making it challenging for workers to climb, so why bother? Elected representatives communicate directly with constituents by email and tweet. Kinda weird  and chaotic,  but it is what it is.

I remember saying — back in the 90s — that whoever could figure out how to capitalize on the sentiment “we are all connected” would make millions.

The cycle of the Sun and the Moon (New Moon, First Quarter, Full, Third Quarter) is 28 days. Between Uranus and Neptune, it’s 171 years. And on August 11th, we hit the first of five markers in this cycle. Uranus and Neptune are now 45 degrees apart.  That’s half of a square (a right angle), which is 90 degrees. I am talking  basic geometry here — this is not brain surgery — just remember what you learned in school about triangles and squares.

In astrology, a 45 degree relationship between planets is called a semi-square. It’s not as heavy as a conjunction (0 degrees) or a square (90 degrees) or an opposition (180 degrees). Still, a semi-square is tense. Thus, it sparks challenges and action.  The five semi-squares between Uranus and Neptune will happen on (courtesy of cafeastrology):

What can we expect in the headlines? Disruption and innovation (Uranus) in Neptune concerns. Vision/fog/dissolving of boundaries (Neptune) in Uranus concerns. Uranus-Neptune patterns are often experienced as weird and/or unsettling. Example: what if technology doesn’t set us free? What if makes us feel lost?  Heads up if you’re a cashier.  Here’s a story from today’s WaPo about why blue-collar workers are quitting their jobs.  Other disruptive headlines include:

Awww…here’s one that just posted. The Broadway adaptation of Groundhog Day will close on September 17th, despite rave reviews.  Well, that’s a surprise. The movie premiered in 1993 — on the Uranus-Neptune conjunction. It stars Bill Murray as the quintessential cranky old Capricorn goat/TV weatherman whose life takes a surreal turn in Punxsatawny, Pennsylvania. It all ends on a happy note with true love and humanitarian connections destined to live happily after — a fun spin on the potential of a Uranus-Neptune conjunction in Capricorn if ever there was one. Highly recommended!

Thank you for reading this forecast. If you ordered a personalized solar eclipse report, now that I am back at my desk in New York, I will write it up and send it to you today.