Dashing off a note before I hit the road, departing Atlanta for points NW in North Carolina, a.k.a. the Path of Totality of tomorrow’s Big Fat New Moon/Solar Eclipse. The Moon is in Leo, seeking ways to shine and help others shine, too. It is at the end of the lunar cycle and thus very, very dead.

In this balsamic phase, we may feel a sense of listlessness or restlessness, anticipating that something new is just ahead, but we don’t know what. In this particular dead Moon — given that it is in Leo — we have a heightened sense of drama and play — all adding to the anticipation of tomorrow’s Big Fat Celestial Event.

The New Moon/Eclipse happens at 2:30 PM ET on MONDAY, after which it immediately goes void until 4:25 PM ET. Next stop for the Moon: Virgo, where it will go about putting everything back in order after the festive mania of the holiday weekend (I’m counting Eclipse Day as an unofficial holiday). Highlights of this week include:

Here is the New Moon/Eclipse chart set for Washington D.C.: 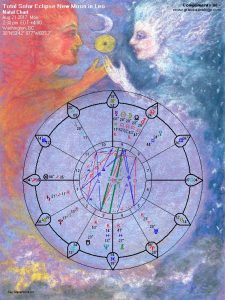 It’s been discussed on more than one occasion in this forecast that this eclipse falls on P45’s Ascendant and his Mars. In ancient times, the horoscope of the head of state was used to anticipate the future of that state/country/kingdom. So yes, this Great American Eclipse — with its Path of Totality that will fall coast-to-coast in the U.S. (first time in 99 years) and only in the U.S. (first time since before the U.S. was “born”) feels like it must have special significance. And if you happen to have planets or an angle within a degree or so of 28 Leo, this eclipse is likely to have special significance for you, too. That would include  off the top of my head — Vladimir Putin, North Korea, Roman Polanski and Bill Clinton.

Here’s another takeaway — without the feeling of foreboding of Something About to Happen — and this applies to everyone. Over the past few weeks I have been contemplating the miracle of eclipses. Really, the miracle. Do you know why we have eclipses? That’s a mechanical question, not a rhetorical one. We have eclipses on Earth because from our point of view, the size of the Sun and the size of the Moon are the same. Even though the Sun is massive and far, far, away — when compared to the humble Moon — the two are equal!

From this realization I began thinking about the symbolism of the Sun: masculine, day forces, conscious will, etc. — and the symbolism of the Moon: feminine, night forces, reflective, etc. Shouldn’t all that these two celestial bodies symbolize carry equal weight here on this earthly plane? Well?

Astrologers are fond of saying: “as above, so below.“

The New Moon chart pictured above shows the Sun and the Moon as equals. That’s my Big Fat Eclipse Meditation for you to contemplate — it applies to you, no matter where this particular eclipse falls in your horoscope. Everyone knows their Sun Sign. Where is your Moon? The needs it symbolizes in your life are just as important as your Sun!

This would be a fine point of discussion with your local astrologer — and I would be delighted to be of service. Here’s the 411 on consultations. Yes, I am still offering a report on how the eclipse is likely to be experienced in your own personal world — check the bottom of the previous forecast for details. If you’ve ordered a report from me recently, gratitude for your patience. The response has been overwhelming and delightful!

The news will be back in the next forecast, when I have access to internet service. Going off the grid now for a day…