As you may have heard, Mercury turned retrograde Saturday at 9:01 PM ET. It stationed (i.e. ground to a halt and changd direction) at 11 degrees of Virgo. It will travel backwards through Virgo, a sign it rules, until September 5th. on August 31st, Mercury will re-enter regal “Because I said so” Leo. It will appear to grind to a halt and move forward at 28 degrees of Leo, which happens to be the same degree (i.e., place in the sky) of the August 21st total solar eclipse. So we can expect some extraordinary information/communication to come out around September 5th — amid no small amount of confusion.

Even if you know nothing else about astrology, you may have heard the term “Mercury retrograde” before. Often it’s accompanied by curses and groans, and that’s a shame. Yes, all of the flights on American Airlines might be grounded because of a computer glitch. Or the entire country of Finland might be offline because there’s a transportation strike. Or some trickster might set off all the tornado warning alarms in Dallas — that actually happened during the last Mercury retrograde in April. Or two state police pilots might perish in a helicopter crash whose cause has yet to be determined (serious astrology buffs will note Pluto, Jupiter and Saturn on the angles of the chart for 4:54PM ET in Charlottesville, VA, the time police were notified of the crash).

Still,  there’s much good that can be accomplished when the Messenger Planet appears to be retracing its steps.

Mercury—which in the language of astrology refers to mindset, travel and communication—will appear to move backward through the sky until Sept 5th. It’s not really moving backward, but that is how it looks from our perspective here on Spaceship Earth. Mercury goes retrograde 3-4 times each year, for a period of 22 days.

You may also find it profitable to REview a project from the past. Maybe you shelved it then, but now is the time to REconsider. However, be advised that a spontaneous, “out-of-the-blue” idea for advancement may not be so sound when Mercury turns direct. This is why the conventional wisdom advises against finalizing and/or signing contracts on deals during Mercury retrograde. An exception might be supported if you are REnegotiating or RElocating. If you absolutely must close a deal, triple check everything. The key is not to RUSH.

Here is the chart for this Mercury retrograde, set for Washington D.C. 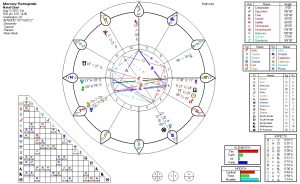 Let the record show that the first time I ran this chart, I used the wrong time. The second time I ran the chart, I saved it in the wrong format. The third time was just right. Damn you, Mercury retrograde!

What jumps out immediately in this D.C. chart is Neptune, planet of fog, deception and meltdowns, right on the Ascendant of this horoscope. Not only that, it is opposing Mercury — just look along the East-West axis of this chart and you’ll see it. Do you think we can expect clearly thought out communication from our nation’s capitol during this retrograde? Ermmm…..no. The Moon is in me-me-me Aries, in the 1st House, about to meet up with rebel Uranus. This suggests a need for disruptive change, executed in an entrepreneurial, “wild card” manner.  Also notable in the chart is Saturn, planet of patriarchy, authority, ambition and control. It is retrograde — suggesting a rethink in Saturn-ruled concerns — sitting right on the Midheaven of the chart. This is the top of the chart — an area referring to leadership and public status. Saturn will turn direct on August 25th at 21 degrees of Sagittarius, putting a squeeze on the horoscopes of P45 and a slew of other entities (people and countries) prominent in the headlines since last December.

This morning at 4:01 AM ET the me-me-me Aries Moon met up with rebel Uranus and went void for a few hours. At 6:40 AM ET, the Moon enters Taurus, seeking to fulfill its need for material comfort and security; to make a tangible form out of Aries drive. Consolidation of authority and form are also suggested by a trine (harmony) between the Leo Sun (leadership) and Saturn in Sagittarius (opinion; collective belief; all things foreign), exact at 5:02 PM ET.

No sleeping in on MONDAY, as the Taurus Moon’s need for security and form is driven throughout the day by contacts with six other planets. The most provocative hits happen at 10:30 AM ET, when the Moon is challenged by Mars in “get away with murder” Leo; the second provocation happens around 9:15 PM ET, the time of the Third Quarter Moon. Whatever your “fit  of apoplexy” agenda was around the New Moon on July 23rd, you may now release whatever didn’t quite work out. In the week ahead, contemplate the seeds you want to plant on the next New Moon on August 21st.

As predicted, Saturday’s headlines were volatile and driven by rose-colored ideals. Hundreds of white men from around the country carrying citronella-scented tiki torches descended upon Charlottesville, VA, with the trumped-up purpose of protesting the removal of a statue of Confederate General Robert E. Lee from a public park.  Nineteen peaceful counter-protesters were injured and one woman was killed when a 20 year-old white supremacist from Ohio allegedly and  deliberately ran them over.

As expected, P45 had little to say or do that was of any use (this is from the Washington Times), while former KKK leader David Duke took credit on behalf of “White Americans” for putting P45 in the White House. Duke stated that white supremacists would “fulfill Trump’s promise and take this country back.” Back where?  To pre-1600, perhaps? Here’s what that looked like:

Yes, there is an astrological point to this.

Elsewhere, Virginia Governor Terry McAuliffe was applauded for telling the white supremacists to “go home and never come back,” saying that they were “anything but patriots.” And then he continued, “you want to talk about about patriots; talk about Thomas Jefferson and George Washington, who brought our nation together…” And this is the astrological point: the Mars-Neptune square in the U.S. horoscope, suggesting a romanticizing (Neptune) of war and guns (Mars); a charismatic but perhaps unrealistic vision. Right now transiting Saturn is putting pressure on that Mars-Neptune square, demanding a reality check and activating a potentially dangerously unaware pattern. Jefferson and Washington were slave-owners; their “all men are created equal” Declaration of Independence didn’t apply to slaves, women, non-property owners and of course, the Native American people who were there first (that’s why they’re called “Native”).

How do we reconcile our American Dream of equality – driven by the need of the U.S. Moon in the humanitarian sign of Aquarius and the enlightened ambition of Saturn in fair and balanced Libra —  when the country was founded by men whose own personal worlds would suggest a screamingly obvious hypocrisy? I don’t have an answer, but this is the task at hand, suggested by planetary patterns.

I’ve been traveling in New Mexico now — driving through plenty of Native American reservations, so this discrepancy between the vision of our Founding Fathers and its apparent hypocrisy has been much on my mind. Next week I will be in North Carolina — near Cherokee, where I may find more food for thought.

That’s it for now; I am being pulled away from my computer by my gracious hosts in Santa Fe — off on another traveling adventure — please forgive any typos, as I won’t be able to proofread — living dangerously in a Mercury retrograde, but there you have it…