And….we’re off to the races again!

The day is driven by the Moon in Pisces, feeling its way forward on its quest to connect with ideals and impressions….real and imagined. Moon goes void at 6:08 PM ET on a sobering challenge from Saturn. Blocked by an authority? Funds cut? Ambition advanced? Structures formed? These are possibilities…likely to be seen in the areas of the press, sports, education, courts, foreigners (if you’re following the news). Chill during the void and stick to routine concerns.

On WEDNESDAY, March roars in like a lion, with the Aries Moon supercharged by not only its weekly clash with Pluto and Uranus, but macho Mars and expansive Jupiter, too.  The action may be glossed over with a cloud of pixie-dust or rose-colored fog, suggested by the Sun’s annual meet-up with Neptune.

On THURSDAY, boundaries may be pushed to infinity and beyond, as Jupiter makes its second face-off with technogeek rebel Uranus at 8:19 PM ET.  On SATURDAY (but being felt all week), Mercury (mindset, communication, travel), already addled by contact with the destructive South Node and its placement in Pisces, meets up with Neptune at 6:10 AM ET. Great for dreamers, artists and escapists. Perhaps not so great for operators of heavy machinery.

Also on Saturday: Venus turns retrograde, which we will see reflected in our values, finances and relationships. It’s a great time for a REview in those areas. Don’t be surprised if the past comes back to haunt you. Venus will be retrograde until April 15th.

Moon voids for the week — in addition to tonight: Wednesday from 9:18 PM  ET until 2:43 AM ET THURSDAY; Friday from 10:20 AM ET until 5:05 AM ET on SATURDAY. If you are new to this forecast and are unfamiliar with the term “Moon void,” here is an old post with tips for handling these cosmic down times.

This week is ripe for action. Review my post about yesterday’s New Moon in Pisces for details about the patterns at play above, reflected in events here on Earth. For further details about how these patterns are likely to play out in your own personal world, here’s the 411 on consultations.

How cool is it that MOONLIGHT won after initially being eclipsed by La La Land, given that there was a solar eclipse that morning? Everyone is talking about last night’s shocking upset (Mars conjunct Uranus)  that was broadcast to a a billion people (Mars-Uranus opposing Jupiter), as a result of someone’s muddled thinking (Mercury in Pisces conjunct the South Node; Sun-Moon conjunct Neptune). Some reporters are even saying unkind things about Best Picture presenters Warren Beatty and Faye Dunaway. Maybe they wouldn’t be so unkind if they understood astrology. Shame on you, Gersh Kuntzman.

Here is Warren Beatty’s horoscope. He’s a me-me-me Aries with Moon in Scorpio. He needs to be appreciated for being in control. He has a Virgo Ascendant, prominently placed near the Aries Point, suggesting he needs to be famous for being seen as perfect. He has a Grand Trine among Moon, Saturn and Pluto. This suggests he is a law unto himself and that he needs to project an aura of not needing anything from anyone else (especially emotionally). Macho Mars is running wild; so is escapist/visionary Neptune. His Venus is retrograde, suggesting that he needs to turn things over and over and over in his heart and mind before making a commitment in matters of love, money and aesthetics. His Saturn is exactly opposing his Ascendant, suggesting he needs to present a deliberate, cautious projection of authority to the public.

Here is Faye Dunaway’s horoscope. She’s an achievement-oriented Capricorn, driven by a Moon in regal, “love-love-me-do” Leo. Like Mr. Beatty, she has Grand Trines in her horoscope. She is a law unto herself. She needs to project an aura of self-sufficiency. Unlike Mr. Beatty, who has cautious Saturn on his angles, Ms. Dunaway has action hero MARS on the angles of her horoscope. This Mars is in Sagittarius, so we see the potential for her actions to push boundaries, perhaps inciting passion or conflict. Her Venus is in Capricorn at the Aries Point. So while Mr. Beatty hems and haws, Ms. Dunaway needs to push the envelope with prominence!! Like Mr. Beatty, she has a Virgo Ascendant. She also needs to be seen as being perfect. Note that yesterday’s eclipse at 8 Pisces fell on Ms. Dunaway’s 6 Pisces Descendant, suggesting that her connection with the public would likely be affected.

So. Given what we know of our Best Picture presenters’ horoscopes, we can understand why things happened. Mr. Beatty is given the wrong envelope. He reads the “winner” on the card. He knows something is not right. He needs to maintain his aura of control, authority and perfection. He hesitates, running his options over and over in his mind. Does it occur to him to ASK the show producers for help? Of course not! His horoscope screams a need for self-sufficiency. Plus he has other patterns in his horoscope right now that suggest a potential lack of focus.

The best Mr. Beatty can do is show the card to Ms. Dunaway. She is also self-sufficient — and needs to be perfect — and has an angle in her horoscope referring to public relations that has just been eclipsed.  She is not going to ask for help! Not only that, but the shocking upset of Mars, Uranus and Jupiter are challenging her Capricorn Sun! Using her Sun’s executive authority, along with the “born-to-rule” potential of her Leo Moon…not to mention her provocative Mars channeling its envelope-pushing need for action without stopping to consider the consequences, Ms. Dunaway declares LA LA LAND the winner.

Could this fun snafu have been avoided? Take a look at the chart for the snafu — I believe it was around 9:09 PM PT — haven’t been able to find it online yet  — if anyone knows it, please send it: 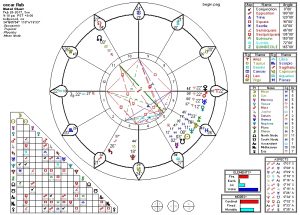 Just look at that cluster of planets: Mars, Uranus and Eris — sitting right on the Descendant — opposed by Jupiter on the Ascendant. Shocking upset!! Shall we “get to the bottom of it?” Note that Ms. Dunaway’s 24 Capricorn Sun would be sitting right at the bottom of this event chart! But it is Mr. Beatty who is getting much of the blame, with his Virgo Ascendant likely to attract more attention

UPDATE: a few years ago it was expected that Meryl Streep would be generating a ton of attention this year — more so than usual. She was honored with a lifetime achievement award at the Golden Globes. Her speech calling out the P45’s wretched character was shared around the world and is still being shared on social media. She was nominated for her 20th Oscar — a world record. The planetary action in her horoscope is transiting Pluto, which suggests personal power and power plays. Pluto is supercharging her Venus (money, fashion sense, values) and her Midheaven (reputation, career). Last night Ms. Streep did not win an award, but she was making headlines all week as a result of witchy-bitchy allegations flung at her by fashion designer Karl Lagerfeld. Here is Ms. Streep’s horoscope.

Be careful on the roads on Wednesday.