We are at the end of the lunar cycle, with a New Moon happening at 9:58 AM ET on SUNDAY. It is not uncommon to feel listless or restless just before a New Moon. We sense that something is just around the corner, but we don’t know what. Wrap up your projects from the past month and get ready to set your intentionsanew.

On SATURDAY the Aquarius Moon goes void at 1:11 PM ET…not to enter Pisces until 7:24 PM ET. Work on your to-do list in the morning. In the afternoon you can chill; take care of routine; avoid the malls and yard sales, as Moon-void purchases are more likely to not be as useful as you intended.

During the void — at 6:08 PM ET — Mercury enters Pisces, where it will float until March 12th. Mercury refers to how we need to think. In Pisces, Mercury is not interested in thinking as much as it is interested in believing. Who cares if it makes no sense? Or if it defies logic and reason? Just believe!!! Do not say you were not warned when reading the headlines likely to hit the fan in the next couple of weeks.  On the upside, if you are an artist, scammer, healer or spiritual type, perhaps you can take Mercury in Pisces straight to the bank.

SUNDAY suggests volatility. Yes, we have a New Moon, which is also an eclipse. We also have a meet-up between warrior Mars and rebel Uranus in me-me-me Aries. Mars refers to anger, guns, courage, steel, cars, the military, war, the head; Uranus refers to mad scientists, seismic activity, genetic mutations, shocks, electricity and upsets to the status quo.  Both of these planets are closerthanthis to another celestial body:  Eris, known in mythology as the Goddess of Discord. Eris represents “increased potential for righteous outrage from those who perceive they haven’t been offered a seat at the table.” Are you a revolting peasant? This could be a great week for you. Otherwise, be mindful around steel: cars, speed, weapons, knives, etc. Already I’m seeing extreme examples in the news, especially involving “accidents.” Example of entities with a strong Eris in touch with other planets in Aries: the Islamic State and Senator Tom Cotton. The Senator’s Eris was under intense pressure a couple of years ago, as noted here.

OK. So. The New Moon in Pisces suggests an opportunity to plant radioactive mutant ninja turtle seeds — bigly. I say “bigly” because in addition to Mars with Uranus, we also have Mars (action!) facing off against Jupiter (expansion! hubris! Alka-Seltzer!), exact on MONDAY at 9:24 AM ET. Mars – Jupiter is a wonderful energy to have at your back if you’re about to deliver an eleven-pound baby. That planetary pattern needs a physical outlet for a big push. And your child — or other creative enterprise — could be a total game-changer, suggested by two other patterns also exact over the next several days. First is Jupiter’s second face-off with Uranus (exact next THURSDAY). Second is the annual meet-up of the Pisces Sun with wiggy Neptune (exact on WEDNESDAY). Congratulations, you’ve just given birth to an Ascended Master — or — if this highly combustible recipe didn’t bake quite right in the oven — a disruptive alien from Planet Ten.

Now. About this New Moon being an eclipse:

A Solar Eclipse can act like a bottleneck of energy. Light flowing from the Sun is temporarily interrupted by the Moon, focusing attention on that interrupted point. Wherever that point falls in your horoscope, something new — and possibly fragile — may enter the picture and grow over the next several months. And here I would be thinking of Michael, the kindhearted policeman in the storybook Make Way for Ducklings, who stopped the flow of traffic on Beacon Street so Mr. and Mrs. Mallard and their brood of eight could safely make their way to the Boston Public Garden. Here is Officer Michael, playing the role of the Moon in a total solar eclipse. Got that?

So when does the bottleneck of energy release, you may be wondering. Good question. We can expect a release of energy (reflected by an event) when another planet makes contact with the degree of the eclipse. Conjunctions are the most potent, but I’d argue that squares and oppositions also make an impact. Here’s an example: in September 2015 there was an eclipse that made contact with my Mercury (communication, mindset) and my Ascendant (personal projection, health). My Mercury happens to be in my Third House (communication) and it rules my Sixth House (health, among other things). A couple of months later, when transiting Mars hit the degree of that eclipse (4 Libra), I lost my voice for four days (until my brilliant acupuncturist restored it in less than an hour). See how an issue symbolized by Mercury in the horoscope became a focal point after it was 1) eclipsed and 2) triggered? Clear?

This eclipse falls almost exactly opposite the eclipse we experienced on September 1st, at 9 degrees of Virgo. If your horoscope was affected by that event, you are likely to be affected by the one happening on Sunday, which is at 8 degrees of Pisces.  Order an Astro-Basics Report if you want to know what degrees all of your planets and angles are at, so you can see where eclipses and other celestial events fall in your horoscope.

The Sabian Symbol for the New Moon is “a jockey.”  This Symbol was last written about on the Full Moon in August of 2012. Cue good old Sabian Symbol guru Blain Bovee for insights on how to apply these symbols in life:

“…a jockey is an image of a rider skilled in maneuvering power within a powerfully contested situation…their job is to give the horse they ride, the horse power underneath them, the best chance at winning the race.  Jockeying for position means to place oneself into an advantageous position. To jockey someone means to draw someone in or out by trickery.”

OK, seriously. We have a window of opportunity in this lunar cycle to take bold steps forward and not trip over the furniture. Challenge yourself to think creatively and strategically outside of the box. If you are engaged in a competitive enterprise, put on your Grandmaster chess hat and force yourself to think 20 steps ahead of the Other Team. You better believe that if you don’t do it, they will. Consider this Symbol — and the planetary patterns involved in this potent New Moon — when you are reading the news. And if you don’t like what you see, then dagnabbit — now is the time to DO SOMETHING about it.

If you’re at a loss for what to do — in any area of your life — consider scheduling a personal consultation. We’ll look at your horoscope and discuss the opportunities likely to present themselves now and in the near-term future. Is this the time to take a course? Might you be up for a promotion? Is your horoscope screaming at you to pursue a creative outlet? Here’s how to contact me.

Here is the chart for the New Moon, set in Washington D.C.: 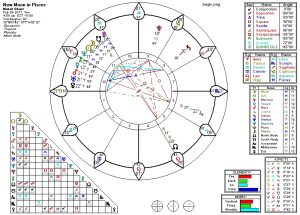 Note that there are no planets in angular houses or fixed signs. Planets in angular houses make their presence known to the public; they are clearly seen. In  this New Moon chart, most of the action is happening under the radar, behind closed doors. That militant Mars-Uranus-Eris conjunction is in the 12th House, a.k.a, the house of hidden enemies and the self-undoing. Venus, ruler of the chart, is also in the 12th and in Aries, and will turn retrograde during this lunar cycle (on March 4th).

We see Sun, Moon, Neptune, Mercury and the South Node in the 11th House. The 11th House traditionally refers to hopes, groups and friendships. Some have argued that the 11th House also suggests the love we receive from others…or may suggest karma we have with those who were our enemies in a past life. It’s also been called the house of “Why Not?” Hmmm. With Mercury in Pisces approaching the South Node, we see the potential for faith-based and/or unreasonable thinking that may be toxic and/or may be released.

Planets in fixed signs need to consolidate, organize and take on a tangible form. The lack of fixed energy among the planets suggests flux, initiation and communication.  Let the record show that most of the planets are in fire and water signs, so the flux may feel like crashing waves or leaping flames — the way a wildfire jumps over a road that might otherwise block its path. How do you deal with a wildfire? Two ways: 1) get out of its path until it extinguishes itself; or 2) drown it. Both are arguably Piscean coping strategies.

How do you deal with a giant wave? I thought for sure the answer would be “don’t struggle against it; go with it,” which is apparently true for dealing with a riptide — and would be true to the surrender associated with Pisces. However, according to the book The Wave: In Pursuit of the Rogues, Freaks, and Giants of the Ocean:

“…it is best to charge straight at it, hoping you make it over.”

…which seems like a strategy more typically associated with Aries: courageous, counter-intuitive and determined to achieve the impossible in order to build something new. Perhaps those are our potential marching orders on this New Moon, with its heavy focus on Pisces (the end of the world)  and Aries (we’re just getting started).

It is interesting that Ascendant of this D.C. – based chart is in Taurus, which is a fixed sign. So we see a need to project an image that looks like it is building and maintaining material comfort and security. Behind the projected image, there is little solid form. Things may not be as they seem.

Thank you for reading this forecast and sharing it with the rest of the Free World.

Will cover the news next time.