Moon is in Aries, driving the day with a need to get something started, preferably a crusade. Note the potential for a speedbump around 6 PM ET, when the me-me-me energy of the Moon may be either 1) smothered or 2) structured and advanced by a streamlining square to Saturn in Capricorn. This comes within two minutes of a harmony between the Moon and Jupiter, suggesting that said streamlining may be presented enthusiastically, for everyone’s own good. Hmm.

General note: now that Jupiter has turned direct, it is moving into a third and final square to Neptune, exact on September 21st. This is one of the dominant patterns of 2019; here’s a primer written in January to remind you what we can expect. And here’s a portion of an interview Stephen Colbert did last week with Anderson Cooper in which he addresses matters of opinion, faith and healing — all apt themes for Jupiter-Neptune patterns. It’s interesting to hear Stephen Colbert put human suffering in perspective, as he was born with Saturn in Pisces. Astrologer Michael Lutin says that people born with Saturn in Pisces nearly always find a way to turn their suffering into an art form. And what is comedy but a coping mechanism for pain?

Avid Readers of this forecast know that its original conceit was to see if I could predict the headlines of the New York Times, using planetary patterns as a guide. After all, it’s often called the “the paper of record.” I started including  other media outlets, as not every Avid Reader subscribes to the NYT and thus can’t access the articles cited. In any event, after over a decade of analysis and research, I continue to be awed by the astonishing synchronicity of planetary patterns and the news — especially, the NYT.

Avid Readers also know that THE most important pattern of this century was the series of seven disruptive squares between Uranus and  Pluto.  The seventh square was exact in March 2015, and here’s what was going on back then.   The biggest issue was climate change, and now, with Saturn activating that seventh square, we are getting a serious and sobering reality check in that arena. Right?

ANY horoscope with planets around 13-15 degrees of Aries, Cancer, Libra and Capricorn was also activated in 2014-2015, and is also now dealing with a reality check. The U.S. horoscope falls into that category, with its Sun at 13 Cancer and its Saturn at 14 Libra. Based on what was making dramatic news as Uranus and Pluto supercharged the U..S. Sun-Saturn square in 2014-2015, the reality check the U.S. had to deal with was the karma of slavery (of African Americans) and genocide (of Native Americans). I wrote about this in June of 2017, when transiting Jupiter in Libra activated the US Sun-Saturn square and I found myself at the Smithsonian National Museum of African-American History & Culture in Washington D.C.

Transiting Saturn made the first of three squares to the U.S. Saturn on January 30th. It squared the U.S. Sun, too — but only once — on January 17th.  Sometime in January, a reporter on the staff of the NYT Sunday magazine proposed an entire issue on one subject: slavery in the United States — and how it made the U.S. what it is today, e.g., the only “advanced” nation that does not use its tax dollars to provide health care for all of its citizens, and a host of other conditions some may be stunned to read.

The reporter sold the pitch. Guess when the NYT Sunday magazine devoted exclusively to slavery was published? The 1619 Project was published on August 13th, two days before the second exact transit of Saturn square to the U.S. Saturn.  It’s called the 1619 Project because on or about August 20th, 1619, the first slave ship from Africa arrived in what is now known as Hampton, Virginia. If you have access to computer software, run the chart for that date against the U.S. horoscope and note the connections.

The third Saturn square happens on October 15th, which is right when transiting Jupiter activates the U.S. Mars-Neptune square for the third time this year. Avid Readers will recall that this is the part of the U.S. horoscope that reflects the American Dream.   It also reflects a potential romance with war, guns, faith, oil, pharmaceuticals and movies. Jupiter expands whatever it touches, for better or for worse.

I hope you take the time to read every article in The 1619 Project.  Newt Gingrich read it — and did not like it one bit. We can appreciate how challenging it would be to shift his opinions, given his horoscope’s strong Neptune patterns — discussed in 2011.  I wonder if Mr. Gingrich has ever visited the Smithsonian National Museum of African-American History & Culture in Washington D.C…

In a related story, Daniel Pantaleo was fired from the NYPD. He was the officer who held Eric Garner in an illegal chokehold back in 2014.  Mr. Garner had attracted attention because he was selling loose cigarettes on the street. Mr. Garner’s last words were, “I can’t breathe.” His death — captured on video — helped spark the Black Lives Matter movement  in 2014 — and here’s a post on the Uranus-Pluto astrology of that from December 2014. How interesting to have a sobering reckoning on that 2014 incident now.  Astrology is amazing.

I started this post hours and hours ago. Turns out it will ship at 6 PM ET. If you re-read the first paragraph of this forecast, you may marvel at how it fits the patterns (!!). Thus I leave you with an inspiring photo of the tallest and oldest living organism in New York City: a 370 year-old tree in Queens. I visited it yesterday, and if it’s  lucky, it may be here for another 100 years, outliving us all. 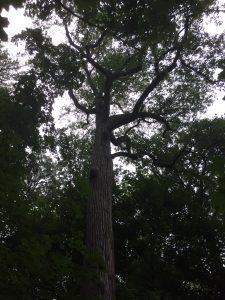