Happy weekend warrior-ing!  As I wrote at the start of the week:

More on that Full Moon: What is illuminated now is likely to be connected to events that happened around the July 16 lunar eclipse at 24 Capricorn. We will have further illumination on those events on the January 10 lunar eclipse at 20 Cancer — to be continued on the April 7 Full Moon at 18 Libra. As an example, see my notes on Shepard Smith’s horoscope below.

This  Sunday’s Full Moon is at 20 Aries, and the Sabian Symbols for this lunation offer the following insights: for the Aries Moon, it’s “a pugilist entering the ring;” for the Libra Sun it’s “a crowd upon the beach.” We last encountered this “pugilist” in July 2015. Sabian Symbol guru Blain Bovee suggests we apply this symbol to “the focused contest between social organization and individuality; the natural inclination to define one’s space; finding the range of one’s power, the impact of one’s punch”.  What are we fighting for? Are we championing a noble cause or are we just in it for ego recognition, born of insecurity? Will we inspire the world with our battle cry or will we just throw a temper tantrum and never mind the damaging consequences of our actions? Aries can go either way — big baby or warrior-hero — what will it be?  Meanwhile, I haven’t written about “the crowd” before, but here’s Bovee’s take.

The New York Times continues to deliver its elective coverage in sync with planetary patterns. Astrology is simply amazing. On a day with Venus opposing Uranus, the NYT Sunday magazine was “The Culture Issue,” with plenty of unconventional women and other disruptive artists, including but not limited to:

Other headlines reflecting the Venus-Uranus face-off:

UPDATE: on Boeing — a horoscope written about in this forecast back in March — and in my column in the current Mountain Astrologer. Major restructuring was anticipated; this week CEO & President Dennis Mullenberg was removed as Boeing’s board chairman; there will likely be more in January. Meanwhile, the Boeing 737 Max — scheduled to be put back into service around the time of Mercury’s next retrograde (ha ha ha — what were they thinking) — isn’t coming back until January 2020 at the earliest.  They’re too busy working on a flying car….

Finally, the Good News Network has discovered the key to happiness.  Who knew?

What’s going on in your horoscope? How will it be affected by today’s Full Moon? January’s Saturn-Pluto conjunction? Here’s the 411 on personal consultations. 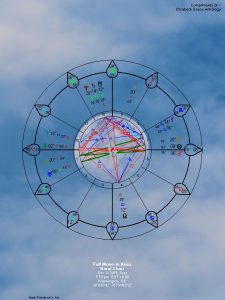