Moon is in Cancer, driving the day with a need for emotional and home/homeland security. Moon functions well in Cancer, and it travels through the day without interference. I hope you made good use of this proactive energy. I applied it with gusto this morning, in the wake of last night’s trine between Mars (action!) and Saturn (discipline!), combined with the focused fire of the Sun and Venus in Aries. It seemed the perfect time to pull out the (fiery) stove and deep-clean the (Cancer) kitchen floor. Oh, how it sparkles now!

And you? Are you sparkling?

One look at the headlines (as I type close to 10 PM ET), and I’m hoping some of the piercing intellect of this week’s planetary patterns will involve serious discussion (followed by action) on the subject of gun control. News of yet another mass shooting in the United States (this one in Boulder, CO) reflects the gloopy-thinking Mercury in Pisces square to restless warrior Mars in Gemini, supported (for better or worse) by the high-functioning ambition of Saturn. Consider this headline and look again at the Aries Ingress chart in the last forecast. Mars is at the bottom of the chart — the root of the situation.

On the upside, we see themes discussed in the Aries Ingress chart in this headline: “Biden Team Prepares $3 Trillion in New Spending for the Economy,” starting with infrastructure, as Mars-Saturn word if there ever was one.

Another reflection of this week’s “war of words” patterns:

Meanwhile, militant discipline and innovative technology were themes in this article on facial recognition technology (it’s everywhere) in the NYT Sunday magazine.

UPDATE: on Ellen DeGeneres, whose 2020 was mighty disruptive, as transiting Uranus rattled her Aquarius Sun and Venus.  Here’s a post about her from last August. Now, with Saturn putting the squeeze on Ellen’s Sun and Venus, the streamlining results of last year’s scandal are coming in. After the first of three squares to Venus, Ellen has apparently lost one million viewers. By this time next year, we would not be surprised by a significant change of direction, as patterns from “change or die” Pluto affect her Sun and Midheaven (career status).

UPDATE: on Tucker Carlson, whose 2020 was mighty empowering. A few years ago, when there was talk of Carlson tossing his hat into a presidential ring, we could see in his horoscope how he was likely to become more prominent. Thanks to the pile-up of planets in Capricorn supercharging his self-image and beginning a climb to the top of his chart, Carlson’s influence has expanded so much that last week, John Oliver felt compelled to make Carlson the focus of his entire show — with good reason.

What’s going on in your horoscope? Are you due for a rise or a raise? A split or a summer fling? Here’s the 411 on personal consultations. We will have a fun and productive discussion together. 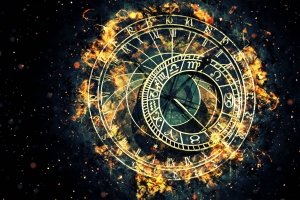