At 5:37 AM ET on SATURDAY,  the Sun enters Aries, and the astrological new year begins!  Courage, self-reliance, inspiration and a pioneering spirit are keywords for the Sun in Aries, sign of the ram — and the lamb.  In the Northern hemisphere (the birthplace of Western astrology), it is a time of renewal and rebirth — a chance to let go of old patterns and make a fresh start.

Here’s what you need to know about the first day of any season from an astrological point of view. The first day of each season (Spring, Summer, Fall and Winter) corresponds with the first day (or first DEGREE) of Aries, Cancer, Libra and Capricorn, respectively. Got that? Good. These four signs are called CARDINAL signs of the zodiac, with “cardinal” here suggesting (from the Latin root of the word), “that on which something turns or depends.”  Cardinal signs take ACTION. They INITIATE. Nothing happens without ACTION. And action leads to  NECESSARY CHANGE. As in a change of seasons — suggested by solstices and equinoxes. Clear?

The first day of a  season is prominent in our culture, right? We make a big deal over it — yes? In astrology, we observe that PLANETS that are at the first degree of a cardinal sign (Aries, Cancer, Libra & Capricorn), tend to pack a more powerful, prominent punch. They suggest ACTION which leads to CHANGE — prominently! The first degree of the cardinal signs is known as the ARIES POINT. Got that?

If you have a planet or angle at the Aries Point, you can expect that the energy of that planet will demand prominent expression in your life. Your friends and family — and perhaps the entire free world — will notice it. William Shatner was born with the Sun at 0 Aries. “To boldly go where no man has gone before”? I should think so — and the whole world knows him for playing that role. Prince William, Meryl Streep, Elizabeth Warren and Ted Cruz are others born with the Sun on the Aries Point — and they can’t help but stick out like a sore thumb.

Here is the chart for the Aries Ingress, set in Washington D.C.: 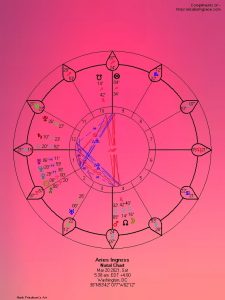 SUNDAY. The Gemini Moon goes void for just 15 minutes this morning, entering Cancer at 8:17 AM ET. Now is the time to focus on the comforts of home and family — whatever builds your sense of emotional security. Venus leaves Pisces for warrior Aries at 10:16 AM ET, which gives you a clue about social expression and values between now and April 14th. Aries is the sign of not now, but RIGHT NOW, and Venus in Aries is known for being a consummate flirt. Venus is almost conjunct the Sun, which most astrologers agree is an attractive pattern to have in a birth chart. If it has a downside, it’s that its attractiveness may function as if it has blinders on — or that it is blinded by the light of the Sun.

At 10:40 AM ET, the Aries Sun squares the Cancer Moon, activating the horoscopes of people with planets at the Aries Point, including Elizabeth Warren, Ted Cruz and Prince William.  Meanwhile, two patterns that have been driving the action all week will be exact. At 7:34 PM ET, Mercury sextiles Uranus, suggesting intuitive innovation in communication and technology, or changes made based on fuzzy thinking and/or math. At 10:34 PM ET, Mars trines Saturn– i.e, the aforementioned easy flow of militant discipline, leading to accomplishment — for better or for worse.

No sleeping in on Monday. The Cancer Moon will not be void.

The story dominating the headlines was a downside potential of last week’s patterns, described in Tuesday’s forecast:

Some people may experience the last days of Pisces as if it really is THE END — and thus conclude that this is Not A Good Thing. Sun in Pisces feels so darn much, and all that wallowing in empathy and suffering may seem overwhelming and hopeless. We are likely to see a few headlines this week of some who failed to pass the test of the Pisces upside, which is faith.

We’ll hear stories that spark empathy and an awareness of suffering, with words expressed and actions taken — not because it was rational or scientific, but because it felt like the right thing to do.

an easy flow of militant discipline, leading to accomplishment.

Less than four hours after that forecast was posted on Tuesday, seven women and one man were killed at three separate massage parlors by a man who purchased his weapon on that very same day (“easy flow of militant discipline,” which also applies to the police to who arrested him after a car [Mars!] chase hours later). Fun fact: it’s easier to buy a gun in Georgia than it is to vote.

I nearly fell out of my chair when I read what Cherokee County Sheriff’s Capt. Jay Baker had to say about the murder suspect (appearing to imply that it was all the victims’ fault):

[he was] …pretty much fed up and kind of at the end of his rope, Yesterday was a really bad day for him and this is what he did.

Heather Cox Richardson has more on this story.  So does Samantha Bee, whose segment also includes Sarah Everard, a British woman murdered by a cop earlier this month. When thousands of women gathered in public to mourn Sarah’s death (even the Duchess of Cambridge attended a vigil), some were arrested and/or manhandled by law enforcement. Outrage ensued.

In Australia, thousands of women have taken to the streets as “allegations of rape have rocked Australia’s Parliament” over the past few weeks.

Meanwhile, back in the United States…

The NYT has an entire section on its website called “Andrew Cuomo’s Scandals.” NY’s Attorney General is conducting one of two investigations of alleged sexual harassment against the Governor of New York. While those investigations continue, more women are going public with their stories — and today’s latest was from a current staffer, not a former employee.  We do not have a birth time for Cuomo, though two astrologers have proposed December 6, 1957, at around 8:36 AM ET in Queens, NY.   That time would give him a Capricorn Ascendant to mask his Sun in Sagittarius, driven by the Moon in chatterbox Gemini. He’d have Mercury sitting right on his Ascendant, adding more yadda yadda yadda yakety-yak yak to the mix. He needs to be the smartest kid in the room, not to mention clever and entertaining  — and with Moon potentially ruling his 7th house of significant others, he needs an audience.  He also needs to be seen as the Man In Charge.

The proposed birth time would give Cuomo a 27 Libra Midheaven, which would be under pressure this year and next by transiting Pluto. That pressure would be reflected in a potential teardown or regeneration of his public status, for better or for worse. It would also reflect the potential for attacks since the beginning of March, as transiting Mars in early Gemini met up with his Moon. Coincidence or conspiracy?

…the Violence Against Women Act (authored by then-Senator Joe Biden in the 90s) was finally renewed by the House, with 172 Republicans voting against it (because they object to a “provision that expands the criminal threshold to bar an individual from buying a gun to include misdemeanor convictions of domestic abuse or stalking. It would also close the so-called boyfriend loophole to expand the definition of who is affected by existing gun prohibitions to include dating partners,” according to NPR). On a similar theme (reflecting current planetary patterns), the government of Turkey withdrew from an international pact designed to protect women from violence (despite violence against women in Turkey now on the rise).

Meanwhile, House Democrats — joined by four — count ’em –four — Republicans — voted to remove the deadline on the Equal Rights Amendment — a.k.a. the ERA.  If Senate can vote on it, maybe it will finally become law — and maybe that vote will happen with Venus in “warrior woman” Aries, not now…but RIGHT NOW, if you please.

What’s going on in your horoscope? When are you due for a promotion or a move across the country? Is it time for you to change careers?  Here’s the 411 on personal consultations.

Thank you for reading this forecast. To support these weekly updates, Avid Reader Diane invites you to become a Faithful Monthly Avid Reader, Fairy Godmother, Godfather or Biggest Fan. “Come on down to the Cosmic Tip Jar!” (she says). We should all have friends as fiercely supportive as Avid Reader Diane. 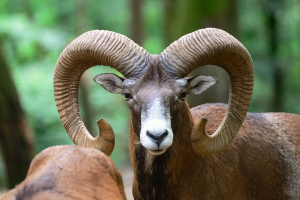