Writing this during the Moon void, which began at 10:43 AM, after a potentially turbulent morning. Moon made its weekly clash with Saturn-Pluto at 7:02 AM and 10:43 AM ET, suggesting authoritarian advances and emotional catharses, for better or for worse.  Chill during the void and stick to routine concerns, like drafting a memo or noodling with a creative project. Note that at 3:03 PM ET, Venus enters Aries, the sign of ‘not now, but RIGHT NOW!” — and that sums up our collective social expression for the next few weeks, until March 4th. Venus in Aries is not the best time for cosmetic improvements, but it may bring hope to those who have been feeling we’ve arrived at the end of the world. If you fall into that category, you may be reflecting the passage of Venus at the very end of Pisces. But never fear — Venus in Aries is determined to start anew!

The Moon enters Leo at 5:45 PM ET, looking for an excuse to party and shine — and maybe the forecast will be posted by then. You could start your weekend early —  during the void. You’re not likely to miss anything of consequence. We may see a jolt or other surprise around 10:43 PM ET, as Moon squares Uranus.

Here is the Full Moon chart, calculated for Washington DC. It should not surprise anyone to see Mars rising in boundary-pushing Sagittarius, squaring the Midheaven. This suggests righteous anger/assertion and/or outrageous action, publicly displayed.  Then we have Mercury slooowly slogging through faith-based Pisces, exactly squaring the Sagittarius Ascendant.  The Sabian Symbol for this Mercury at 9 Pisces is “a jockey,” giving us a sense of what’s driving the information that is likely to come out, as in “jockeying for position.” 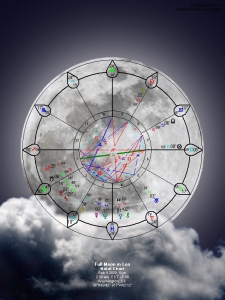 Venus is at the Aries Point about to meet up with Chiron, the Wounded Healer. Chiron has been doing its darnedest to force a karmic reckoning with “toxic masculinity” ever since it launched into Aries a year ago. Thus I expect we’ll have a significant bit of news on that front over the next couple of weeks. Also of interest: no major aspects among the planets for the next several days, suggesting we’re in for period of events akin to a ginormous ice shelf falling into the sea. Now you see it. Now you don’t. Just like that.

The Sabian Symbols  for this Full Moon are (for the Aquarius Sun) “a big white dove, a message bearer” and (for the Leo Moon) “Zuni Sun worshippers.” Note that 20 Aquarius was the New Moon on February 8, 2016. As usual we turn to Sabian Symbol guru Blaine Bovee for additional insight, who notes this image is “one of communication borne by a creature of the sky; a peaceful message from a heavenly source.”  Politically, Bovee notes that white is a “conservative” color — as opposed to the “fiery” hue of “radical inclinations.” Spiritually, Bovee associates white with “purity.”  And then, just to confuse everyone, he notes that “white” can in fact be burning — as in “white-hot” or cool, refreshing and pure as the driven snow.

The Sabian Symbol for the Moon at 20 Leo refers to a small Native American tribe in western New Mexico. Ritual is of extreme importance to the Zuni, says Bovee. Fun facts: he also says that the Zuni believe there are “two types of men: sun-baked and un-baked,” and that the Zuni language is not related to any other Native American language. “It is as if it were created  from divine communication.” See how that echoes the quality of Mercury in the Full Moon chart?

How are we to apply this Symbol? What might we see reflected in the headlines? On the upside, Bovee suggests “genius that finds the sacred everywhere…listening for unique language; messages of relief precipitated by intense, burning reverence.” Also to the upside: “a strong sense of community.” On the down side: intense extremes…and “affinities for a host of world-religion motifs.”

Meanwhile, Moon goes void on Sunday at 11:08 AM ET until 6:39 PM ET.  Moon enters Virgo for the night, hoping to set things right. Maybe at the Oscars, too. The horoscopes of Brad Pitt and Joaquin Phoenix are hot –perhaps even white hot.

Welp. I wish I’d looked at the chart for the start of the Iowa Caucuses before they happened. I could have told you that it was happening too soon, and was symbolized by that potentially gloopy-minded Mercury in Pisces, which is not the best mascot for an event requiring accurate data. Mercury is on the part of the chart affectionately known as the Portals of Death, and the Midheaven (public status) is conjunct Algol, the fixed star associated with beheadings and other ways of “losing one’s head.” There’s more, but you get the idea.

In a freakish “coincidence,” blame was thrown onto a company called Shadow, which made the app that was supposed to make reporting  precinct data easy. Shadow…the day after Mercury entered its SHADOW phase?! Later it was revealed that when the app failed, the Plan B (phone lines) also failed, because they were jammed by supporters of P45. As of today, there does not appear to be a clear winner ; it’s a toss-up between Bernie and Mayor Pete‘s supercharged horoscopes. Biden came in 4th, reflecting the difficult challenge of standing on solid ground when Neptune has turned the ground beneath your feet (a.k.a. the cusp of the 4th house) into quicksand, surrounded by fog. Bloomberg, however,  did really, really well.

The next day was the State of the Union, which reflected planetary patterns:

Moon in Gemini has no speed bumps in the morning, but things may be foggy around 3 PM ET, which is about when the Moon is squared by Neptune. Keep that in mind if you listen to any speeches later that night. A conflict of will may arise later that night, as Mars (action, anger) opposes the Moon at 12:07 AM on Wednesday.

Here’s Stephen Colbert with a live summary of the speech, which Nancy Pelosi later declared was “a pack of lies,” which the good folks at factcheck.org affirmed.  As Colbert explains, Speaker Pelosi  brought down the House and brought the potential Mars-Moon opposition to life by tearing the speech in half, which is not a violation of federal law, no matter what P45 says. How interesting that it happened on the last day  of a long transit of Neptune on her Mercury (how she needs to think). The downside potential of that is idealism and magical thinking; the upside is heightened intuition.

As for P45, Avid Readers will recall his horoscope is under another intense transit of Mars this week, with exact hits to his Sun-Moon and other points and planets. Pushing boundaries via action and aggression would be expected, such as awarding a Presidential Medal of Freedom to Rush Limbaugh in the House chamber, as opposed to the traditional setting for presidential business, i.e.,  the Oval Office. Limbaugh is a poster child for the extremes of power, limitation and transformation that may be activated when the horoscope is hit by the January 12th Lean, Mean Meet-Up of Saturn and Pluto in Capricorn. January 12th is his birthday and that week he was diagnosed with advanced lung cancer, driving home the reality that —in spite of denials to the contrary — smoking might actually be damaging to one’s health. Upside potential: it isn’t every day that you are awarded the nation’s highest civilian honor on national TV. Here is his horoscope.

Consistent with the chart for the start of the impeachment trial, P45 got to keep his job and we are one step closer to the authoritarian America many pundits and astrologers have been warning could well happen here. The chart for the start of the trial did suggest a potential jolt or statement of independence…and that came from Utah’s senator, Mitt Romney, whose horoscope has been covered here since forever. Senator Romney is a Pisces, driven by the Moon in Scorpio, which is exactly conjunct Jupiter. This is a man who needs needs needs to be appreciated for his depth, substance and fierce Scorpio loyalty — and he is on a mission, BIG TIME. We can see patterns in his horoscope that suggest how he would be wrestling with ideals and matters of spirit at this time. But wrestle he did, and at the end of the day, God and conscience won out over loyalty to the party. If you did not watch his deeply moving speech on the Senate floor explaining why he believed that P45 abused the power of his office and should be removed, you can do so here — or watch Stephen Colbert’s heartfelt salute.

Which brings us to Thursday and Friday (today)…

…when P45 was still under the influence of that boundary-pushing Mars assertion AND an opposition to his Venus (who, what and how he needs to love) from authoritarian Saturn. Off he goes to a prayer breakfast, crying victimization (as his horoscope suggests) and expressing contempt for his adversaries. So much for the keynote speaker at the prayer breakfast, former American Enterprise Institute chief Arthur Brooks. Mr. Brooks spoke about his new book, which argues that we should love our enemies, for this is this only way to solve our problems. His argument is compelling,  but I couldn’t help wonder if Arthur Brooks would ever join forces with Marianne “Return to Love” Williamson, who espouses the exact same strategy?

Then, while Senator Susan Collins (R-ME) was still clinging to her idealized belief (Venus square Neptune in her horoscope) that P45 had learned his lesson, heads started to roll:

We see Venus at the Aries Point (values, money, aesthetics and other Venus-ruled matters becoming prominent):

And then there is this WaPo exclusive: Secret Service paid rates as high as $650/night at P45 properties (the federal guidelines say max $200-ish/night). Wow!  That’s prominent big bucks — and there will be much more of this as we prepare for the next Mercury retrograde, which starts on Feb 16th — NOT the 12th, as I misstated in the last forecast. Have you backed up your computers yet? DO IT NOW. And have a cookie as a measure of comfort. It’s Girl Scout cookie season, and WaPo has ranked them, just for you.

What’s going on in your horoscope? Are you up for a test of faith, like Mitt Romney? Or perhaps an Oscar, like Brad Pitt? Here’s the 411 on consultations.…and oh!! before I forget. If you are free the last four days in March and want to participate in the absolute best astrology conference EVER, check out the Empowered Astrology Conference, described here. We have a few spaces available — but only a few!! 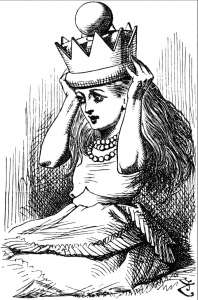 This image brought to you

by the Moon in regal Leo

Monday 3/12/2018: Sneak Peek at the Week; Hard-Headed Women and Other Mercury-Venus-Saturn Reflections