Friday is driven by the Moon in me-me-me Aries, seeking to initiate, lead and champion the underdog. That’s on a good day. The downside is a need for combat, self-absorption, macho impulsiveness and falling down stairs because it’s faster than walking. This energy cruises without interference until 6:45PM ET, when it may be blown out of proportion by a contact with expansive Jupiter. At 10:09 PM ET we have a clash between the Moon and Pluto, suggesting a power play that is streamlined effectively by an easy alignment with Saturn minutes later.

Moon goes void on a rebellious meet-up with Uranus at 7:45AM ET on SATURDAY for much of the day — not settling down in Taurus until 9:24 PM ET. A Moon void in Aries sounds like an apt backdrop for a lot of crusading noise, attracting attention —  unfocused and ultimately without consequence. No impulse shopping; no freaking out over crises that will likely prove to be much ado about nothing. Chill.

As I type, Venus — money, women, social expression, art — is at the Aries Point at the very end of Sagittarius. It’s demanding prominence for its boundary-pushing, high-flying expression. Is the stock market’s continuing surge reflecting this pattern? I’ll buy it. At 11:55PM ET Venus leaves Sag for crusty Capricorn, seeking to use people and things for its enterprising ambition and social status. Not much compassion with Venus in Capricorn.

Mercury enters Sagittarius on Saturday at 9:40AM, inclined to think broadly without bothering to fine-tune the details. Eh, fix it in post — as we say in the TV and film production world.  On SUNDAY, Moon will be Taurus, seeking to establish material security and comfort — however you feel the world ought to be. Good food, drink, music, a massage or snuggle with your sweetie would be excellent forms of self-medication.

You definitely want to look at the Moon on Sunday night. It hasn’t been this close to Earth since 1948 — if memory serves — and it won’t be this close again until 2034. This Super Duper SuperMoon  is looming large — right on Donald Trump’s point of professional status and on Hillary Clinton’s point of relationship — one on one — and with the public.  If you have a planet or angle around 23 degrees of Taurus, Scorpio, Leo or Aquarius, whatever actions were key in your life in June and July are ready for their close-up now.

This Full Moon pits our need for material comfort and preservation (Taurus Moon) against the Scorpio Sun’s energy for breakdown, decay and regeneration. It shines a light on values — what yours vs. what’s ours — including finances. The Sabian Symbols are — for the Moon — “a jewelry shop” and for the Sun — “a bunny metamorphosed into a fairy.” Oh, these Symbols are wicked fun.

Sabian Symbol guru Blaine Bovee advises us that “jewelry” is connected to “joke.” In French, jeu is a game. Bovee notes that buying  jewelry requires “some savvy,” as all that glitters is not gold. As for the bunny, Bovee suggests that this is an image of something ordinary transformed into the extraordinary. The word bunny derives from the Scottish word bun — which refers to a rabbit’s tail, “the short stump of the buttocks.” “Bunny” is a diminutive term. How curious to have this Symbol show up now, suggesting the potential for being “the butt of a joke.”

“Fairy” is from the Old French word for fate, says Bovee — also resonating with the word fati — that which is divine or spoken. Bovee advises us to be mindful of “the playful allure of words and enchanting realities; heightened sensitivities about reality issues”….(he lists other potentials — buy his book)…ending with “trading one’s last cow for a handful of beans.”

The Full Moon happens at 8:52 Am ET on MONDAY — and then goes void until 8:23PM ET. During these long voids you may experience the sensation that time is moving at a slower pace. Once the Moon enters Gemini at 8:23PM ET Monday night, I anticipate a buzz of information over the following two days.

File under Venus (women)  in Sagittarius (media, publishing) at the Aries Point: a review of Megyn Kelly’s new book, “Settle For More,” in which she alleges that debate questions were leaked to the Trump campaign beforehand; that the candidate called network executives to complain about it. Then she tells a story of an incident that occurred on the day of the debate which will make some wonder if she was poisoned. The book comes out on November 15th.  Here’s what I wrote about her horoscope on August 14th:

Megyn Kelly is a Scorpio with Moon in either Cancer or Leo — we do not have a birth time. A measurement between her Scorpio Sun and Uranus suggests this is a breakout period for her. We’d expect her to be uncompromising in matters of self-expression, and likely get away with it. Another measurement between her Mars (planet of action) and Uranus suggests a higher probability of taking action outside the box, with surprising results that clear the air. These measurements will be in effect for some time.  Wouldn’t you say that’s apt, given the unfettered independence she showed in her questioning of Donald Trump in last week’s debate? And the airwaves are still buzzing about it…

In other news, Hillary Clinton won….the popular vote. Donald Trump captured more electoral votes and is our current president-elect. If you have been reading this forecast for a year, you should not be surprised by the outcome. Numb and/or sad, perhaps — but surprised? Not given the strength of Trump’s horoscope. Not in the aftermath of the Uranus-Pluto square, which we would see the potential — based on what has happened when this cycle has been active (e.g., the early 1930s and the mid-60s), for angry disruptions of the established status quo, revolution and demagoguery. Not given how the U.S. horoscope has been hit by this cycle, with all its potential for anguish and skeletons in the closet revealed. Search the archives for gems posted over the years — here’s one about what was going on in the U.S. horoscope in the ’70s, explaining the planetary patterns behind our vote for Ronald Reagan in 1980.

And yes, I know that in the aftermath of the explosive reveal (“grab ’em by the p****”) suggested by planetary patterns on October 7th, I did write that this anticipated wound (as noted in Trump’s horoscope) could serve as the chink in the armor that would lead to a win for Hillary. I admit that I wrote it even as I anticipated a surprise attack on October 29th — which ended up being FBI Director Comey’s red herring letter to Congress about Hillary’s emails.  Mea culpa. Should have waited until after the 29th.

Let’s pause for a minute to share a really cool piece of news that has nothing to do with any particular planetary pattern: “Wireless Brain-Spine Connection Overcomes Paralysis in Monkeys”. You may find it uplifting and miraculous, so long as you don’t wonder too much about how those monkeys came to be paralyzed in the first place.

The class action suit against Trump University (charged with fraud) is supposed to begin on November 28th — a day with a dead Moon and a long Moon void. A postponement? A back-room deal? A sudden twist favoring the underdog? One can appreciate why Trump’s legal team would argue for this trial to start after the inauguration. The Electoral College meets on December 19th, and they get to make the final call on who will be the next president.

How is that possible, you may ask, having totally forgotten what you learned in high school civics. Don’t we live in a democracy? No, because if we did, then the winner of the popular vote would be our next president. And no citizen would be denied the right to vote. We live in a republic, crafted by men of a certain class who apparently did not believe that the populace should be trusted to choose the best candidate for the Oval Office. It is fascinating to learn that these electors can vote for whomever they choose. In fact, an elector in Washington State made headlines last week when he announced that if Hillary Clinton won the state, he would not vote her. You can imagine the outrage. And now there’s a petition going around urging electors not to vote for Trump on December 19th. What will they do?

December 19th is when Mercury turns retrograde, ohhhh so close to an exact meet-up with Pluto in Capricorn, suggesting a need for an empowered, possibly ruthlessly persuasive review. On that day Mars will shift into Pisces, after opposing Trump’s 29 Leo Ascendant. We could see the potential for an attack or outburst of energy that day and a few days beforehand.

To be continued…though frankly, I’d much rather talk about YOU. Obviously we’re on track for continued upheaval in 2017. What’s going on in your horoscope? What challenges and rewards may be in store? This is the time to contact me for a personal consultation…with gratitude for the many referrals I’ve received from appreciative clients. 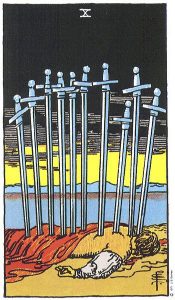 (from Beth Owlsdaughter’s Tarot Card of the Week)