Late post to the start of the week, as I was on a deadline for my second column for  The Mountain Astrologer magazine. I made excellent use of Monday’s energized Moon in Taurus, structuring insights on five horoscopes that are hot in the headlines. The column is “Charts in the News” — and you’ll find it in the student section. My first column is in the April/May issue, published this week. Get it at your local Barnes & Noble or here. The next one comes out in mid-May.

Today (TUESDAY) at 5:31 AM ET, the Taurus Moon went void with a sigh, offering an opportunity to chill until 11:48 AM ET. Hopefully you rolled with any twists and flakes — and did not freak out over a perceived crisis. Now that it’s past noon in New York, the day is driven by the Moon in Gemini, seeking to be the most informed person in the room. There are no exact aspects to the Moon until tomorrow, suggesting little to no bumps in the road as you travel from Point A to Point B. However, there is quite a surge building to a release on…

WEDNESDAY — when the Sun sextiles (harmonizes) Pluto at 10:25 AM ET, followed by a square between the Sun and Jupiter at 9:29 PM ET. With Jupiter in Sagittarius, we see potential abundance, exuberance or blatant indulgence, especially if you have a planet or angle around 22 degrees of Sagittarius, Virgo, Pisces or Gemini. In the news, watch for big stories involving higher education, athletics, law, travel and religion. The sextile between Sun and Pluto suggests effective communication and cooperation involving matters of will, leadership, power and resources.  A harmony between Mars and Saturn suggests earthy productivity, physical discipline and ease of action (it will be exact early Thursday, but in effect now). If Wednesday afternoon feels a bit escapist, bewildering or dreamy, you’re feeling the potential of a square between the buzz buzz buzz Gemini Moon and Neptune, exact at 5:44 PM ET. With Mercury still retrograde, double check your spelling, facts and crosswalks.

THURSDAY — Moon will be void between 8:31 AM and 5:49 PM ET. The challenge is what to do with the surge of energy seeking release in the few hours beforehand, in the form of the First Quarter Moon. Here is a challenge demanding adjustment regarding last week’s New Moon agenda. Staying focused and on track may be problematic. If you are new to this forecast and unfamiliar with the term “Moon void” or “void of course Moon,” here’s a primer. This would be the day to flake without consequence on previously scheduled events.

The Moon gets back into gear at 5:49 PM ET when it enters Cancer. We leave the mental buzz of Gemini behind and replace it with a Cancer need for emotional and home/homeland security. What can you do to nurture yourself  and/or others during these next few days?  Thursday night is ripe for a reunion of old friends, the quirkier the better. Moon will sextile Uranus at 6:31 PM ET (quirky friends) and the Sun meets up with Mercury retrograde at 9:48 PM ET, so you can wax rhapsodic and wistfully about those good old days.

FRIDAY — Moon continues in Cancer with no bumps in the road. The aspect of the day is Mercury’s second square to big, fat Jupiter at 7:17 PM ET, facilitating big fat ideas that are likely half-baked, if they are new. If they are not new, they are likely to reveal dirt, dirt and more dirt, aided by Mercury’s second sextile to (dirt-digging) Pluto on….

SATURDAY — at 9:11 AM ET.  Between Mercury’s square to Jupiter and sextile to Pluto, the sensitive Cancer Moon is blocked by Saturn at 2:24 AM ET, followed by Moon’s weekly emotional catharsis/power play with Pluto. So…heavy stuff in the middle of the night, especially if you have planets around 18-22 degrees of Aries, Cancer, Libra and Capricorn.

Moon goes void at 2:03 PM ET until 8:57 PM ET. No shopping during those hours, if you please. The Moon’s ingress into Leo tonight may come with a surprise, as Moon makes its weekly clash with Uranus at 9:47 PM ET.

SUNDAY — Moon in Leo all day — time for a party or the best St. Pat’s Day Parade ever. A harmony between Mercury and Mars at 11:23 AM ET supports walking your talk.

I told you Mercury retrograde would kick up a ton of dirt. On the day before Sun squares Jupiter (higher education), and in a year with three squares between Jupiter and Neptune (illusion, deception), actress Felicity Huffman is currently the poster child for this breaking scandal:

It seems Ms. Huffman paid a company $15K to help her daughter fake her way into a top school. She considered — but then backed out of —  using a second dishonest tactic to help another daughter. Other parents — including “prominent CEOs” (here’s the list) paid thousands of dollars more in bribes — as much as MILLIONS more. BUT — their names, companies and faces were not used to break the story. Nor have photos of the corrupt college officials who took those big, fat bribes been plastered all over the news. So why Felicity Huffman? What the heck is going on in her horoscope?

Ms. Huffman is a Sagittarius, with the Sun at 17 degrees of that sign. Transiting Jupiter will meet up with her Sun three times this year — in January, June and September. Do you think she’s feeling lucky right now? If she read a blurb in a magazine or ezine that publishes Stupid Astrology, she might have thought 2019 would be the year all Sagittarians win the lottery, thanks to lucky Jupiter. Stupid Astrology!

Yes, Jupiter can reflect a cosmic sugar daddy. But essentially Jupiter refers to expansion, for better or for worse. We must consider the whole horoscope, not just focus on one promising part. This is how a skilled astrologer can assist you. Can you guess what other planet is hot in Felicity Huffman’s chart right now? Kudos if you guessed NEPTUNE — which refers to scandal, deception, victimization and wipe out. Transiting Neptune will square her Sun for the first of a few passes on April 2nd; another measurement involving her Sun and Neptune is exact on March 19th, and has been in effect for a few months. Coincidence or conspiracy?

Here is one Jupiter transit that might be declared lucky. In an interview with WaPo published yesterday, House Speaker Nancy Pelosi said she did not support impeaching Trump, as it would be too divisive. “Unless there’s something so compelling and overwhelming and bipartisan,” she added. Yesterday transiting Jupiter exactly opposed his Gemini Sun. Was it lucky?

So many scandals. Here’s another one. If you have a mind like mine, you’re always asking WHY? As in, “of all the massage parlors in Florida that Robert Kraft would have chosen to patronize, WHY would he have chosen that one?” Did he read a review online? Or might someone he trusted have suggested it? Was it just a coincidence that over the weekend  it was revealed that Li “Cindy” Yang, the founder of the massage parlor in question, had posted a fun selfie taken with Trump at his Mar-a-Lago Superbowl party, where they all cheered for Patriots’ owner…Robert Kraft. While Ms. Yang no longer owns that particular parlor, nothing has changed since it changed hands, including its reputation for providing extra services.  And Ms. Yang has moved on to more lucrative financial ventures, including apparently selling access to Trump family members to wealthy Chinese. Here’s Stephen Colbert to explain it all for you.

Meanwhile, the Miami Herald is doing such a stellar job of reporting on the corrupted (by federal prosecutors, supervised by current U.S. Labor Secretary Alex Acosta) plea deal of sex offender Jeffrey Epstein that the Miami U.S. Attorney’s office has recused itself from an ongoing victims’ rights case. The case has been reassigned to the U.S. Attorney’s Office in Atlanta, supervised by U.S. attorney Byung J.”Bjay” Pak. Did you know that one of the sixteen-year-old girls in that case was recruited by Epstein’s partner-in-crime while she was working in the spa at Mar-a-Lago? What does this have to do with astrology?

In Jeffrey Epstein‘s case (1/20/1953 in Coney Island, NY — time unknown), we see that his Sun has just experienced the last of three unsettling squares from rebel Uranus, while transiting Neptune sits on his exact conjunction of a steamy Venus and Mars in Pisces. Meanwhile, transiting Saturn and Pluto are in tough contact with his Mercury, suggesting a potentially intense reality check. So the timing of these surprising disruptions of the status quo aligns with his horoscope.

Boeing also has a horoscope: July 19, 1934 — 1 PM — Wilmington, Delaware. It is also experiencing a few unsettling patterns. As we move through 2019 and into 2020, we may see major restructuring  and streamlining within the company, as transiting Saturn and Pluto hit the angles of its horoscope and its Libra Moon. Right now, 27 airlines have grounded its 737 Max 8, after an Ethiopian Airlines 737 Max 8 crashed shortly after takeoff on Sunday.  It was the second fatal crash in recent months for this particular Boeing model.

UPDATE: on Pete Davidson, last written about in December 2018, when he was in an extremely public depth of despair. Yet his horoscope suggested a promising new creative passion/love interest by spring of 2019. On Saturday he was on SNL talking about…his new creative passion. How about that? He and Kate Beckinsale are dating. Cue Snoopy Dance now, please.

Davidson also talked about a philosophical dilemma: how should we treat music and other forms of expression that were created by artists (so far, only men) who we now know were sexual predators (e.g., Michael Jackson, R Kelly, Kevin Spacey, etc.). Pete Davidson needs to think deeply about how we should make use of people and things, given five planets in Scorpio and a “how can I make this work?” Capricorn Moon.

In the grander scheme of astrological patterns, this debate refers to Chiron in Aries (healing toxic masculinity and a fractured sense of self) and the scandalous TMI coming to light under the series of Jupiter  (expansion) squares to  Neptune (music, deception, drugs). And let’s not forget the even bigger shift sparked by the seeds planted on January 9, 2018, when Sun, Venus and Pluto were all together at 19 degrees of Capricorn: women stepping into power. Right now Saturn is almost at 19 Capricorn. Those seeds are for real. It’s fascinating to watch them take root, as anticipated.

Speaking of women and power, Avid Reader Liz has written a book called Women, Meditation & Power. I read it a few weeks ago while serving as a pollworker in a special election held in New York City (with only 7% of eligible voters showing up, I had plenty of free time). Liz turns stereotypical gender roles upside down, and makes a compelling argument for how we can bring men and women back into balance — and why. But don’t take it from me, read the reviews — and if you read her book, let me know if you appreciated its fresh and provocative perspective.

Thank you for reading this forecast. Remember that Mercury retrogrades are apt times to REconnect and REview your life…with your astrologer. Here’s how to contact me…and yes, I owe a few of you an email…thanks for your patience! 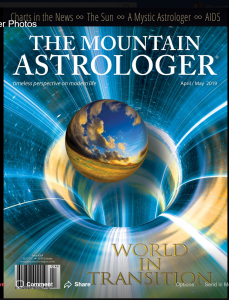