As anticipated, Friday was a busy news day. The quest for fairness and balance in relationships  — reflected by the Libra Moon — had to juggle multiple heavy hits — into the late evening.  If last night was your date night, emotions were likely to be exceptionally intense, for better or for worse.

On SATURDAY, the intensity continues as the Moon plunges into Scorpio, ending the chatter and replacing it with a need for depth and control. The morning may begin with a jolt, as the Moon opposes rebel Uranus. Investigative dirt and/or persuasive talk is likely to be on the agenda, given the first of three sextiles between Mercury and corruption-exposing Pluto, exact at 12:15 PM ET. A clash between the Moon and Mars at 10:12 PM ET heightens the potential for a notable outburst of expression.

This is the backdrop for the Oscars — and it’s nowhere near as glitzy as the planetary backdrop of Oscars past. There won’t even be a host. I anticipate that the Oscar will go to whichever films and players best express the energy of Scorpio, combined with wounded healer Chiron.  Spike Lee may be a Pisces with Moon in Scorpio (we do not have an exact birth time); Glenn Close has the Sun at the end of Pisces; Ruth Bader Ginsberg is a Pisces with Moon in Scorpio (a documentary about her is up for an Oscar).  I will be surprised if there are tons of big laughs or gaffes, other than the wry/self-deprecating humor we might expect from a trio of planets in Capricorn: Venus, Saturn and Pluto. These are the cosmic times in which we live. The famous Vanity Fair party, once the hottest and glitziest Oscar soiree, is now described as “a week-long corporate branding palooza.” Yeah, that’s that trio of planets in corporate Capricorn, too.  And if there was any doubt about the zeitgeist of these next couple of days, this morning when I returned to the draft of this forecast, I saw this: Stanley Donen, Director of Mirthful Musicals, Dead at 94.

I will watch the Oscars and I will miss Billy Crystal. You? Here’s how he opened the show in 1998. How times change. As they will change and change again.  Fortunately, we can use astrology as a guide.

Whatever happens on Sunday, the Scorpio Moon goes void on MONDAY at 7:14 AM ET, getting the work week off to a wandering start and a possible twist, flake or a “much ado about nothing” crisis. We can all heave a sigh of relief at 4:19 PM ET, when the Moon vaults into high-flying Sagittarius.

What did I say about Friday?

Mental Mercury in spacey/intuitive Pisces makes its first of three squares to a high-functioning Jupiter in Sagittarius. Watch the news for potential boondoggles in courts, publishing, academia, opinions. At 10:49 PM ET, Venus meets up with Pluto in Capricorn; the suggestion is power plays and catharses in matters of women, money, aesthetics and values. I expect a sobering hit around lunchtime, as Moon squares Saturn, followed by the intensity of the Moon’s weekly clash with Pluto at 9:51 PM ET…watch the late afternoon news dump.

Right. Boondoggles. And add “sports” to the keywords associated with Jupiter in Sagittarius.

All week I’ve been thinking about what I wrote in the last post about Chiron entering Aries: “It’s time to focus on healing toxic aggression, masculinity and leaders — all associated with Aries.” The day after that was posted, Barack Obama made news when he advised men “to avoid toxic masculine behavior.” His horoscope was triggered by Chiron entering Aries, as it made contact with his Venus (values and social expression; how and what we love) at 0 Cancer, a cardinal sign. Coincidence or conspiracy?

In other news, and on a similar theme:

And while we’re on the subject: “The deadly truth about a world built for men — from car crashes to stab vests.” Thank the good folks at The Guardian for publishing this provocative thought:

When broadcaster Sandi Toksvig was studying anthropology at university, one of her female professors held up a photograph of an antler bone with 28 markings on it. “This,” said the professor, “is alleged to be man’s first attempt at a calendar.” Toksvig and her fellow students looked at the bone in admiration. “Tell me,” the professor continued, “what man needs to know when 28 days have passed? I suspect that this is woman’s first attempt at a calendar.”

How intriguing to consider that first markers of time may have been female.

This is a story some have said should really be front and center, cutting through the clutter of salacious headlines. Pluto refers to power (nuclear and otherwise); Mercury in touch with Pluto, combined with other patterns, suggests corruption exposed. Did you know that The Donald’s administration has been secretly negotiating to sell nuclear technology to Saudi Arabia? The proposed deal may well be illegal.

Hmm…it seems we should have some guidelines for managing toxicity. Here’s some expert advice for choosing a perfume or cologne that’s just right for you.  Here are the “new household rules” for what needs to be cleaned and how often.  And finally, here is the iconic mirthful scene from the musical Singin’ in the Rain.  Cue Gene Kelly and Debbie Reynolds, directed by Stanley Donen now, please.

And if that’s not enough fun for you, here’s the classic Hollywood musical mash-up, set to Uptown Funk.

Thank you for reading this forecast. To find out what these planetary patterns suggests for you in your own personal world, here’s the 411 on consultations. I am honored to be of service. 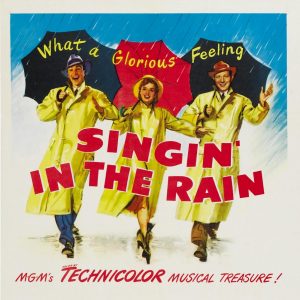