Writing this in the dark of the Moon and under the influence of Neptune. At 6:39 AM ET on Sunday,  Mercury squared the planet of fog; at 3:15 AM ET on MONDAY, the righteously opinionated Moon in Sagittarius follows suit. Here’s to the weird and the woo-woo — as in — UFO sightings in NYC are up 283% since 2018.

The dark of the Moon is the end of the lunar cycle. It’s apt for clandestine activities and wrapping up projects from the past 30 days. The sense of restlessness typical at this time is amplified by the total solar eclipse we’ll have on MONDAY at 11:17 AM ET. It’s not the time to ship anything new, especially between 11:17 AM ET and 10:35 PM ET, when the Moon will be void of course. Take some time to contemplate your intentions — not just for the New Moon, but for the seed-planting opportunity that arrives on December 21st, as Jupiter (the Greater Benefic) and Saturn (the Greater Malefic) meet up at the very beginning of Aquarius. The technical term for the Jupiter-Saturn meet-up is Great Conjunction — and in this special case, Great Mutation — and you can read all about that here.

But about today’s total solar eclipse….

Often the seeds planted for growth during a eclipse are hidden. Sometime later, when the eclipse is activated by a transiting planet, whatever was planted can make itself known quite suddenly and forcefully. And once it’s out, there’s no going back.

Here’s an example of an eclipse trigger. On January 10, 2020, we had an eclipse at 20 degrees of Cancer/Capricorn. It was a lunar eclipse, offering illumination and release. This is when the novel coronavirus was named and its genetic sequence released. Countries began mobilizing to deal with it. Today, Mars is at 20 Aries for the third time this year (because Mars was retrograde). 20 Aries is a square to 20 Cancer/Capricorn, thus triggering the eclipse. Today, shortly after 9 AM ET, the first Covid vaccine was administered in the U.S. The planet representing the vaccine in the chart for that event is Mars! Meanwhile, in the UK,  a mutation of Covid-19 that spreads faster than the original was identified. Coincidence or conspiracy?

With respect to the vaccine, note that it’s getting started in the US on an eclipse. We are likely to see a relevant acceleration around April 12, June 1 and September 2. If you are now feeling delighted to learn something new and useful,  I invite you to support the work of this Forecast via the fabulous Cosmic Tip Jar. Happy holidaze!

Here is the New Moon/eclipse set  in Washington D.C.: 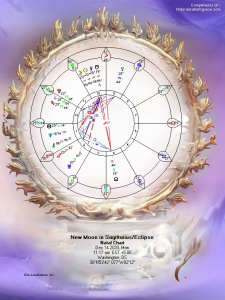 We see the Sun and Moon in the area of the horoscope related to leaders of business and state and their respective corporate and government entities. That’s the focus for the U.S. with this eclipse. A debilitated Mercury (thinking and communication) has just separated from the South Node (a toxic point of release, specifically with respect to collective beliefs). Mercury and the South Node are also in the 10th House. Perhaps an example of a sloppy and toxic mindset would be Stephen Miller‘s announcement that in an alternative reality, a group of humans posing as electors will vote to confirm a second term for P45. Have I mentioned that the Sun, Moon, Mercury and South Node are all in a challenging aspect with delusional Neptune — and that all five are connected to P45’s Sun, Moon and Nodes?

Note how energized Mercury is by a trine to a high-functioning Mars (in Aries).

There is a theme of endings for the U.S. in this eclipse chart. We see 29 Aquarius on the Ascendant — the end of the sign. It’s fascinating that 29 Aquarius is P45’s Descendant (his connection with the public and significant others) and president-elect Joe Biden’s South Node.

Venus is at 28 Scorpio — again with the endings! It squares the Aquarius Ascendant — and also P45’s Ascendant. It also exactly conjoins president-elect Joe Biden’s Venus — which we will see today as the Electoral College meets to formally elect him to serve as 46th President of the United States. The voting started before the Moon went void — and is expected to conclude sometime after 5 PM ET today. This is not ideal astrologically, as the Moon will still be void. It will be void during Biden’s address to the nation tonight at 7:30 PM ET, but I will watch it anyway — and think of it as routine.

Venus is minutes away from an exact harmony (a sextile) with Jupiter and Saturn. We’ll see plenty of stories about women, values, social expression and arts — some with a last-gasp, patriarchal spin. Exhibit A: a garbage op-ed in the Wall Street Journal  criticizes Dr. Jill Biden for being known as “Dr.” Exhibit B: a garbage article in the New York Post thought it fitting to reveal that a first-responder who can’t make ends meet on her paltry salary has a side-gig in the s*x industry. Shame on both women for not staying in the kitchen, barefoot and pregnant. Amiright?

Astro-geeks who are Avid Readers of this forecast should pull out the chart for the August 2017 Great American Eclipse and note the connections between that chart set in DC and this one. Take a look at how the charts connect with P45 and Biden.

The Sabian Symbol for the eclipse is a hopeful “bluebird standing at the door of the house.” Sabian Sage Blain Bovee describes it as an “image of beginnings that bode happiness, and fortunate possibilities just outside the door.”  It remains to be seen if those fortunate possibilities will become real. In this next lunar cycle, watch for news that reflects the challenge of stepping out into a new world; optimistic outlooks; being in the right place at the right time. Consider all things blue (says Bovee): “the blues, nostalgia, blue skies, blue blood, blue babies, lavender, blue-collar workers, blue-hair, blue moon, blue movies, out of the blue good fortune”…and of course, blue states.

You are more personally affected by this total solar eclipse if you have a planet or point around 23 Sagittarius. This includes P45 and Kamala Harris. If you’d like a few paragraphs of personal insights on this eclipse and your horoscope, toss $46 into my Cosmic Tip Jar and send me your birth data.

And now…the rest of the week…moving at warp speed:

And now, an absolute tonof news — preceded by a reminder that gift certificates for consultation, reports and Quick Questions are most definitely available. Here’s the current menu of offerings –– enough to please all your friends, colleagues and relations.

We covered the astrological timing of the rush to release the vaccines. They’re coming out under the influence of Neptune and in the dark of the Moon, right before an eclipse. There’s likely to be twists to this story in the coming months, for better or worse. I’d feel better if the vaccine was deployed AFTER Mars gets out of the shadow period of this year’s retrograde. Then we wouldn’t see headlines in which the FDA chief is told he’ll be fired unless he approves the Pfizer vaccine — which he then did, in an emergency authorization. This poorly-timed rush was reflected in the utterly unsurprising headline that vaccine recipients in the UK who also have allergies have been experiencing “reactions.” In other news, president-elect Biden will have the White House disinfected before taking office.

The release of the vaccine inspired an encore performance by SNL diva Kate McKinnon as medical expert Dr. Wayne Wenowdis — enjoy! I fill these forecasts with laughs at no extra charge.

Neptune refers to conspiracy and scandals.

This Neptune story is heavy, but I believe it’s worth two minutes of your time. As you may know, the death penalty was resurrected in the US over the summer. P45 has accelerated the pace (Mars) of putting certain inmates to death by lethal injection (Neptune) in recent days. Last week, Brandon Bernard was executed, even though five of the jurors who recommended the death penalty said they would not have done so had certain information been made available to them. I happened to see a video on Rep. Alyanna Pressley’s Twitter feed, where Mr. Bernard talked about how he stayed “motivated” to work on improving himself in his years of incarceration. Neptune refers to redemption and healing.

Meanwhile, in Heather Cox Richardson‘s latest post, she notes that two female evangelical leaders have publicly expressed regret for their Republican votes down ballot this year. They are horrified by the 126 U.S. Congresspersons who signed on to the Texas lawsuit asking the Supreme Court to overturn the November 3rd election. One wonders if it’s occurred to those 126 seditious persons that the votes they received in the last election would have to be tossed out, too. Here are their names.

Today is astrologer Rockie Gardiner‘s birthday. Rockie wrote the Rockie Horoscope for LA Weekly for years and years and years. From her I learned how a void of course Moon operates, and how planetary patterns are reflected in the energy of the day — no matter what’s going on in your own unique horoscope. After she passed away at 70 on Halloween 2008 at 11:11 AM PT, I missed her forecasts terribly. (Fun fact: another important mentor — Noel Tyl — also passed away at 11:11 AM).

After six rudderless months of Rockie Horoscope withdrawal, I realized I was going to have to write the forecast myself. Back in 2009, most of what was available online was Sun Sign astrology — and that’s not what this. So. A birthday toast to Rockie (my inspiration) — and to her dear friend (and my yoga teacher) Scott, through whom I got to meet Rockie in person, so many, many years ago. 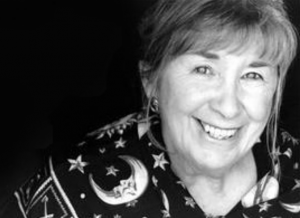