The start of the work week is driven by the Moon in rip, roarin’ Leo, looking for a stage upon which to shine or a royal edict to pronounce. A fun Moon in Leo exercise is to pay someone a compliment — and see how they handle the appreciation. Around 1:53 PM ET, Moon squares Mercury, suggesting a creative expression demanding depth along with a sense of play.

General notes for the week: there are no exact aspects among the planets — except from the Moon — until Sunday. We’ll feel the tension building to a release all week. Meanwhile, two planets will change signs — Sun and Mars. One planet changes direction — Mercury. A fourth planet — Jupiter — is also worth noting, as it is almost through with its year-long sojourn in Sagittarius, the sign it rules. It leaves Sag for Capricorn on December 2, where its expansive and jovial nature must then find a way to conform to Capricorn’s insistence on status, structure and achievement — through all of 2020. But before it exits Sag, Jupiter will make contact with the Galactic Center — i.e., 27 degrees of Sagittarius. Ooh, what’s that?

The Galactic Center is a “supermassive black hole” around which everything in our galaxy revolves. The black hole seems to be a source of massive radio waves, so if one had a planet or point around 26-27 Sagittarius in the horoscope, that planet/point might be exceptionally tuned in to messages from Central Command. Peri Lyons (a gifted intuitive I’ve mentioned before), would be one example, as her Sun and Ascendant are connected to the Galactic Center– and she is quite a channel. I have a planet in touch with the GC, too. How about you? If you would like a few paragraphs of personal insights on the Galactic Center in your horoscope — and how it may be personally affected by Jupiter this week, I will be happy to oblige. Toss $44 into my Cosmic Tip Jar. Send me your birth data via this form — and stay tuned!

Last week we were talking about Monday’s transit of Mercury, closely followed by Tuesday’s Full Moon in Taurus. Here’s that forecast, if you missed it. Guess whose horoscope was directly affected? Exhibit A: Marie Yovanovitch, the summarily dismissed and maliciously maligned former ambassador to Ukraine. Did you watch her testify on the second day of the public impeachment hearings on Friday? I wish I could say that everyone on the flight to NY from New Orleans was glued to their TV screens, but most were playing video games or watching movies featuring guns and car chases.

Anyhoo, Marie Yovanovitch kept her cool, as you’d expect her to do as a Scorpio born on 11/11/58 in Montreal (unknown birth time). Her Sun and Venus were activated by Mercury’s transit and the Full Moon — and perhaps her Scorpio Moon was, too. Oh — and she has Jupiter and Neptune in Scorpio — this is a woman on a mission, thank you very much. She is fiercely independent and innovative, suggested by her Sun-Venus conjunction’s square to rebel Uranus, as well as this NYT op-ed. We can also understand why P45 would find her such a threat. He made that clear by badmouthing her via tweet as she was testifying. Guess where her Mars is? At 25 Taurus, right on his Midheaven and square his Mars. Know who else has Mars at 25 Taurus? Nancy Pelosi (who also has a fearless Scorpio Moon).

Exhibit B: Prince Andrew, who went on the telly last week to say he has no recollection of ever meeting Virginia Giuffre and can’t explain the photo of him smiling with his arm wrapped around the then 17-year-old’s waist. The planet in his horoscope ruling matters of significant others and shared values/investments was activated. Virginia Giuffre, as you may recall, is one of Jeffrey Epstein’s many accusers. The interview has been widely panned (says the NYT) as “nuclear explosion bad.” Prince Andrew’s horoscope is scheduled for major activity in 2020, starting in January. That’s when his Midheaven (career/public status) will be challenged by squares from both Saturn and Pluto, suggesting streamlining and transformation.

Exhibit C was affected by the Full Moon — and especially the Mercury transit, as it built on communications that happened in 2015 and 2016 (re-read Monday’s forecast for details). Senior White House staffer and Stephen Miller made headlines when a trove of 900 emails he’d sent to a writer at Breitbart were leaked by the Southern Poverty Law Center. The emails revealed that Mr. Miller sought to sought to “promote white nationalism, far-right extremist ideas and anti-immigrant rhetoric,” according to the Washington Post. When were those emails written? In a 15-month period between 2015 and 2016. What planet in his horoscope was activated? His regal Mars in Leo, ruler of the area of his horoscope that refers to written communication and how he needs to think. It’s just amazing how many people with Mars in Leo are making news for arguably authoritarian ways of being and doing.

UPDATE: on the ongoing upsets to the status quo involving all things related to Taurus, as Uranus travels through the sign of the bull:

Other stories you may enjoy:

Avid Readers may recall that P45’s horoscope was up for a considerable squeeze starting in November and continuing through 2020.

UPDATE: on Pete Buttigieg, who has taken a decisive lead in the Iowa polls. We still do not have a confirmed birth time for his horoscope, but with transiting Jupiter meeting up with his natal Neptune last Wednesday, we can see how his ability to be seen as an inspiration at his time would be amplified. A sextile to Pluto from Jupiter would reflect easy access to power and resources.

In other news…there are leaks and more leaks…some of which involve the authoritarian themes reflecting Saturn in Capricorn, as it prepares to meet up with Pluto (extremism) on January 12th:

Thank you for reading this forecast. And thanks to Avid Reader Katya for sharing this photo of her valiant effort to watch last Monday’s transit of Mercury — on a day with Mercury retrograde…d’oh! 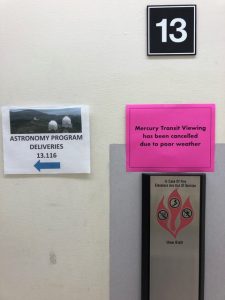 Monday 11/11/2019: Sneak Peek at the Week; the Transit of Mercury: Full Moon...Why You Keep Getting Back Together With Your Ex, According to Astrology
Scroll to top