The Moon entered Scorpio last night at 9:13 PM ET, driving today and SATURDAY with a need for emotional depth and control. If you woke up on the wrong side of the bed, you can blame a cranky connection between  the Moon and Mars at 8:12 AM ET. Evening prospects are sweeter, given harmonious aspects between Venus and cosmic sugar daddy Jupiter, at 7:40 PM ET and 10:29 PM ET. Sounds like a great night for a date with Mr. Rogers (Won’t You Be My Neighbor?) or the sequel to Mamma Mia! Maybe even a double feature…

Aspects to the Moon on SATURDAY are also fairly smooth. There’s no Moon void to derail shopping adventures. Maybe a stubborn impasse around 4 PM ET, as Mercury in Leo squares that Scorpio Moon….

SUNDAY starts with a one-hour Moon void and that sweet harmony between Venus and Jupiter, exact at 5:21 AM ET.  Moon enters Sagittarius at 6:12 AM ET, driving the day with a need to push boundaries. Get outside; engage in a righteous debate; lighten up. Another shift happens at 5:01 PM ET, when the Sun enter regal Leo, ramping up the heat for the next few weeks. If you’re a Leo born between July 22 and July 30th, tell me how this slow burn of a summer is going for you…

No sleeping in on MONDAY. The Sag Moon continues to give us something to talk about — e.g., a scandal or a dreamy ideal. Those options will be reflecting a face-off between a perfection-seeking Venus in Virgo and wallowing Neptune in Pisces, exact on TUESDAY. By then we’ll be feeling even more of the buzz of WEDNESDAY’s square between the Sun (leaders) and Uranus (disruption); Mercury retrograde on THURSDAY (BACK UP YOUR COMPUTERS NOW); the biggest, fattest total lunar eclipse we will see this whole century on FRIDAY, featuring a feisty Sun-Mars face-off and more consolidation of power, suggested by a harmony between Venus and Pluto.

Going back to my metaphor anticipating that this week’s events would be like watching an ice shelf suddenly collapse into the sea, here is a clip of Dan Coats (Director of National Intelligence) hearing that the White House has announced that Vladimir Putin  will be coming to the White House this fall. Congressman William Hurd (R-TX) is a former undercover CIA agent who penned an op-ed arguing that P45 is being “manipulated by Putin.”   The silence from other members of his party is deafening…but let’s see what happens next week, with its assertive patterns.

Ooh…and WaPo’s Jennifer Rubin is back from vacay. Here she is, writing about “a tipping point.”

Meanwhile, like other movements seeking to contain “People Who Are Not Like Us” making waves around the world, the Israeli Knesset passed a “nation-state bill” described by the Los Angeles Times as:

formaliz(ing) in Israeli law the superior rights and privileges that Jewish citizens of the state enjoy over its indigenous Palestinian minority, who comprise roughly 20% of the population. It demotes Arabic from one of two official languages to a mere “special” status, deepens racial segregation by directing the government to “encourage and promote” Jewish settlement, and declares that the right to self-determination in Israel is “exclusive” to the Jewish people, denying the history and ancient Palestinian roots in this land. It also prioritizes the Jewishness of the state over its democratic character, omitting any reference to “democracy” or “equality.”

Israel’s horoscope was hit hard by the Big Fat Solar Eclipse of 2017, with its “get away with murder” Mars at 28 degrees of Leo totally eclipsed. We see the potential for an uptick in assertion and aggression. As I type, a new war in Gaza is escalating, something that one really ought to avoid during a Mars retrograde. Next week, the Big Fat Lunar Eclipse of 2018 will totally eclipse Israel’s regal Leo Moon.  This suggests a big change of public status for its people, with extra provocation added by contact from transiting Uranus and Mars.

Yes, I am really looking forward to seeing the Mr. Rogers documentary, Won’t You Be My Neighbor?   With transiting Jupiter on his 15 Scorpio cusp of his 7th House, it makes sense that Mr. Rogers would be back in the public eye at this time. He even got his own stamp! Of course, with a 29 degree Pisces Sun at the Aries Point, naturally he would be famous for embodying the belief that We Are One.  Oh, but he’d do it with his own quirky style, with his Sun conjunct Uranus in me-me-me Aries. A Mercury-Venus conjunction in Pisces adds to his need for idealism, along with a soulful Pisces Moon. His Taurus Ascendant needs to project an aura of material comfort and security — and don’t you think he does?  Here is his horoscope, which lives forever, doncha know.

It is fascinating to see a meme circulating on Facebook last night, featuring a quote by Fred Rogers, who had a TV show that was comforting and beloved by children everywhere (Mr. Rogers’ Neighborhood): “When I was a boy and I would see scary things in the news, my mother would say, ‘Look for the helpers. You will always find people who are helping.’”

Your mission this weekend is to arise, go forth and be a helper, inspired by the sweet sextile between the benefics, Venus and Jupiter.

Thank you for reading this forecast — with extra special gratitude to Avid Readers Karen and Martha for contributing to my Cosmic Tip Jar.

You made my day. 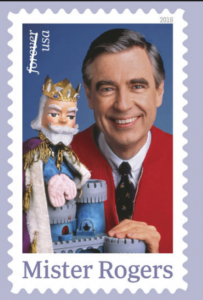