The energy of the day is brought to you by the Moon in Libra, seeking to be popular, fair and balanced. It will cruise without interference until a few hours before 2:43 AM ET on THURSDAY, when it will be challenged by ruthless Pluto. Power play or catharsis? Then more relatively smooth sailing until the First Quarter Moon at 3:52 PM ET.

My advice: work with the energy of the late night Moon-Pluto square and use that emotional depth to facilitate harmony in relationships. With Mars now retrograde since June 26th, an urge to grumble at significant others is understandable. But is it really about them? Consider how your inner demons may be at play. Also consider this aptly-timed article: a bad marriage is seriously bad for your health.

And now, a word from our sponsor: to schedule a personal consultation, here’s how to contact me.  To those who’ve asked if I teach,  yes I do.  I’d also be pleased to give a talk to your group — in person or via the amazing internet — on Astrology 101. I did one of those on Monday at a Pilates studio, with the following feedback:

“Your talk was probably one of the best that I’ve been to in a long time. Clear, informative and engaging, it was wonderful! I am excited to plan the next one!”

And now, the news. File this all under “I told you the newsmfeed this week would be like watching an ice shelf in Antarctica suddenly collapse into the sea, changing the topography forever.”

Of course you all remember P45’s horoscope for July 16th, yes? Here it is again.   Monday’s Putin-P45 summit began at 1:12 PM in Helsinki. Looking at the chart for that moment for a meet-up, we see the two parties represented by 1) a detail-oriented, hypercritical, effective Venus in Virgo, buoyed by a harmony with expansive Jupiter and 2) an imbecilic self-immolating renegade Mars in Aquarius — wandering without focus, retrograde and about to self-destruct on the South Node. Now. You tell me — which planet represented which party?

Right. And then this happened: “At Summit With Russia, Trump Betrays His Country in Plain Sight”.  Because what U.S. president wouldn’t announce to the world that when it comes to espionage and efforts to sabotage our country, he’ll take the word of a Russian president over the facts presented by multiple U.S. intelligence agencies any day? And that was just one of many jaw-dropping statements. Here’s the full video of the Putin-P45 press conference, in case you missed it. And here’s a written excerpt, with flat-out falsehoods noted by the NYT.

The answer to the question is simple and clear, if one takes the words of Maya Angelou to heart, “When someone shows you who they are, believe them the first time.”

Meanwhile in Washington, over the past few days, 29 year-old Maria Butina was arrested and indicted on “charges of being a covert Russian agent,” as you will read in this WaPo piece: “‘She was like a novelty’: How alleged Russian agent Maria Butina gained access to elite conservative circles,” Note the connections between Ms. Butina and the NRA. But what was she doing at the National Prayer Breakfast?

Getting back to P45’s Helsinki sinkhole…yesterday, during the much ado about nothing Moon void in Virgo, P45 tried to make things right by saying he “misspoke,” earning him a place — according to Stephen Colbert — “in the Lying Hall of Fame.”  Watch this video and watch him lie about Queen Elizabeth. Then notice that that three minutes into the clip, P45 states, “I have a full faith in our intelligence agencies,” and as he says those words, the lights in the Oval Office go out. Coincidence or conspiracy?

After researching possible causes for the sudden power outage, I warmed to a theory suggested in this piece from the NYT: “Supernatural Cleaning Methods,” (written for owners of haunted houses), arguing that lights going on and off without apparent cause might actually be reflecting the influence of an otherworldly presence.

Hmmm…but who might haunt the Oval Office? A former occupant who is no longer among the living? How about….Ronald Reagan?  Of course I looked at his horoscope to assess its potential for action yesterday around 12 PM ET in Washington DC. If any Avid Reader has an exact time for when those lights went out, please let me know. The lamestream media is hopeless when it comes to timing. 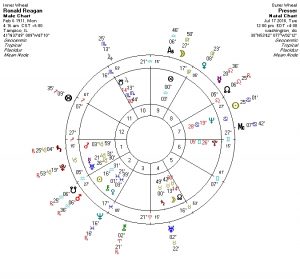 Dear Avid Readers, I believe we have found our culprit. The horoscope lives forever, doncha’ know. The Gipper ain’t buying the gaslighting. And really, I don’t see why he would. Nor should you. Case closed.

Are we having fun yet?

UPDATE: it appears the White House really is haunted…

Signs Jupiter (expansion) might have just turned direct in Scorpio:

As we approach Sunday’s harmonious sextile (an aspect suggesting cooperation and generosity), let’s close with one of the most uplifting stories I’ve read in a while: “An Alabama man walked almost 20 miles to his new job. When his boss found out, he gave him a car.”  Not only did the aptly-named Walter Carr —  literally go the extra mile(s) in his eight-hour trek in the middle of the night, but a police officer who questioned the 20 year-old African-American en route did not try to arrest him. Instead, he bought Mr. Carr breakfast and engaged the help of another officer, who gave him a lift six hours into the journey. But wait, there’s more! After arriving at his destination and doing a stellar job moving furniture from one household to another, the satisfied customer started a GoFundMe campaign on his behalf, which as of this morning had generated $37,000. A few days later, Carr’s boss gave him the car.

Wouldn’t it be fun to see Walter Carr’s horoscope? I suspect we’d see it activated by last week’s two Grand Trines.  I love that everyone in this story chose to be a hero, supporting and rewarding Carr’s noble cause. With today’s Libra Moon traveling free and clear, you, too can be a hero by appreciating and noticing the efforts of people in your life who are going the extra mile.