The weekend is driven by the Moon in Cancer and its focus on home, family and homeland security. Go with the intuitive flow. The big pattern — as you may recall — is the Sun’s annual meet-up with Neptune, exact at 7:42 AM ET on Sunday. All this week there have been tons of headlines reflecting Neptune in Pisces themes: oil, fish, oceans, deception, toxins, wipe-outs, dissolving of boundaries, music, the surreal, refugees, victims, drugs, etc. I’ll list them in a minute. In your own personal world, wherever this Sun-Neptune conjunction at 22 Pisces falls is where you may plant seeds for a vision to carry you through the rest of 2022.

What kind of vision? Let’s look for clues in the Sabian Symbol for this Sun-Neptune conjunction. It is “Spiritist phenomena.” “Spirit” comes from the Latin word referring to breath, breathing and animating forces. Breath is of the air, and thus wind comes to mind. Maybe inspiration, too.  Here are Blain Bovee’s thoughts from 2010, using his interpretation of the Sabian Symbol to understand then-current headlines. I appreciate his opinion that this Symbol has a shakiness about it — in the way a newborn foal is shaky in their first steps. And now the phrase “ride like the wind” just jumped into my mind. I think that was a song. And yes – it was — and here it is.

The weekend — and much of the rest of the month may have that newborn shakiness about it, with occasional exceptions. For example, after Sunday’s Sun-Neptune conjunction in the morning (likely to be even more bewildering thanks to the loss of an hour of sleep as we SPRING FORWARD), Moon makes its weekly clash with Pluto around noon — suggesting a power play or catharsis. Then the Moon goes void. Chill out for four hours — and no impulsive shopping. At 3:31 PM ET, Moon enters Leo — hopefully to take the stage and shine or play. That would be the upside. Downside: drama kings and queens on the loose, mugging for the camera and issuing royal edicts.

No sleeping in on Monday. The Leo Moon will not be void — and it’ll be busy.

Remember, if you’d like to LISTEN to a Sneak Peek of this written Sneak Peek at the Week, tune in to Avid Reader Alison Woo’s nifty podcast, “2022: The Year of Love,” posted all over the place on Sunday night. Last week, my Whether Forecast was at the end of Alison’s interview with guest Dominee Maurer — which aptly reflected last week’s expansive Sun-Jupiter conjunction. How so? Because Dominee shared how she lost 170 pounds — and gained a life.

…sponsored by Sun-Neptune in Pisces:

This year I’ve noticed an uptick in stories reflecting an increased awareness of animal (i.e., any creature that is not human) intelligence. Not just in the newspapers — but in social media, too. Did you see the videos of dogs playing Jenga?  This NYT piece struck me as intuitively obvious, ” “Wildlife Personalities Play a Role in Nature,” i.e., scientists are recognizing that all living creatures have unique personalities — not just creatures we keep as pets. Way to go, scientists! Empathy — and the awareness that we are all connected — a Neptune in Pisces thing!

Meanwhile, the battle between proponents of democracy and proponents of authoritarianism continues…as suggested by Pluto at the verrrrry end of Capricorn vs. Saturn square Uranus and the Great Mutation in Aquarius.

Random happenings this week that seem like good things:

The U.S. Postal Reform Act actually passed in the Senate with a bipartisan vote — when the Moon was aptly in Gemini. This bill will:

Maybe the bill will be signed by President Biden around March 21st, when Mercury conjoins Jupiter (and it will get more attention than it’s gotten).

Speaking of Biden, the Violence Against Women Act (which then-Senator Biden authored in 1994) was finally renewed (after lapsing in 2019) as part of a Sun-Jupiter-sponsored $1.5 trillion dollar spending bill that’s “on a fast track” in Congress. Neptune refers to victims.

Meanwhile, after scores and scores of attempts, Congress finally passed a bill — named in honor of Emmett Till — that makes lynching a federal hate crime. Hard to believe that the Senate blocked this bill in 2020.

In honor of the Sun-Neptune conjunction in Pisces, I will be watching “Inventing Anna” (“a true story about a fake heiress”). Anna Delvey’s horoscope will be the subject of a future podcast — stay tuned!

Meanwhile, here’s the parody of Inventing Anna that aired on SNL last weekend.

And here’s the 411 on personal consultations.

And here’s the link to the Cosmic Tip Jar, where Joyful Random and Faithful Monthly Expressions of Appreciations are always appreciated, especially from fellow professionals and serious astrology students. 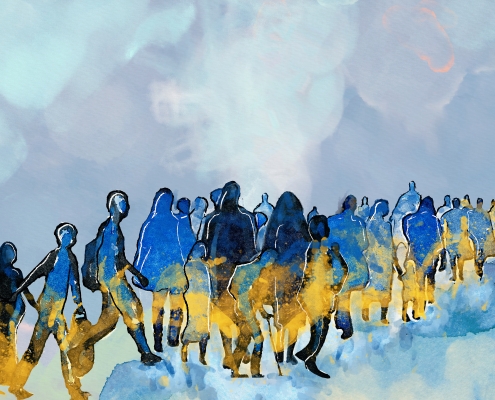 Neptune refers to refugees and empathy.