Happy New Moon in Gemini — exact at 10:59PM ET. Moon entered Gemini on Friday at 11:01PM ET. If you’ve been feeling listless or restless in the past 24 hours, you’re tuning in to the Moon being at the end of the lunar cycle, literally in the dark about what the next new cycle will bring. Now that it’s after 11PM ET, you can light a candle and re-set your intentions for the next thirty days.

A Gemini Moon seeks  to be the smartest, most entertaining kid in the room. How much fun can you stand to have? A lot of serious fun, if planetary patterns are reliable guideposts. Which in fact they are.

In the last forecast I wrote about the rare planetary pattern dominating last week and this New Moon. It’s called a Mutable Grand Cross involving the Sun (vitality), Moon (reigning need), Venus (women, money, art, social expression), Saturn (ambition, patriarchy, cuts, control), Jupiter (expansion) and Neptune (illusion, fantasy, surreal, spirits, music, vision, oil).  Here is the chart for the New Moon, included here expressly for Avid Reader Deborah, a highly educated and awesome woman who is intrigued by the idea that planetary patterns are accurate guideposts for events in the world, the headlines and in the lives of individuals.

Deborah is awesome because she took the time to tell me that she’s having trouble understanding the technical jargon. Since I now know this, I can actually do something about it. Deborah — the big red square with the red X in it is the Grand Cross. It jumps out at you, doesn’t it? It is a dynamic energy pattern. That’s all you need to know for now — I hope it helps. And now we’ll talk about its potential — in plain English — no jargon. 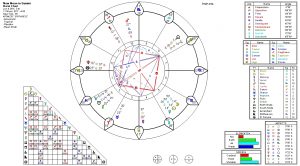 Ever watched an improvisational comedy sketch? Or better yet, taken an improv comedy class? I spent a year doing almost nothing but studying improv comedy. This is one of the best things you can study to prepare yourself for the “real world.”

You’re on a stage with your scene partner. Your mission is to get a life. You do this by creating a story that has action, tension and resolution. There are no limits as to person, place, thing or time. There are, however, some rules that will make a scene more successful than others:

The inspiration for these marching orders on this New Moon came to me when a friend posted a status on Facebook earlier this week that was perfectly in tune with planetary patterns. So I made it my Facebook status and added the astrological perspective:

PAY VERY CLOSE ATTENTION TO THESE INSTRUCTIONS: I would like my Facebook Friends to comment on this status, sharing how we met. But I want you to LIE. That’s right, just make it up. And after you comment, Copy this to your status, so I can do the same, I bet HALF of you won’t read the instructions right!  This is just for fun — to celebrate this week’s Sun-Neptune square — among other planetary patterns that make all things possible at once, even if it’s not real. Also, I haven’t heard or seen from most of you in ages — and I miss you.

Suffice it to say that I have wildly imaginative and entertaining friends.

The other inspiration for how to maximize the potential of this New Moon comes from a quote from Illusions, a wonderful little guidebook by Richard Bach:

If you will practice being fictional for a while, you will understand that fictional characters are sometimes more real than people with bodies and heartbeats.

Here’s another perspective. A Grand Cross pattern has four squares and two oppositions. Oppositions suggest polarity — that’s easy to see, right? A friend of mine who actually has a Grand Cross in his horoscope once told me that one of his big life challenges has been to find the center among opposing extremes within himself. If you were born a few days before or after the 4th of June, September, December or March, you are especially affected by this New Moon. Perhaps you have a number of  opposing forces on your plate, all claiming to be equally valid. How will you find the center?

Finding the center among opposing extremes could apply to  all of us this month. The rules of improv (listed above) can help you create the best scene for all. On a more Big Picture, political level, you could also consider this book: The Reunited States of America: How We Can Bridge the Partisan Divide. I just happened to cross paths with the author this week. Coincidence or conspiracy?

The theory imagines a cat inside a box along with a radioactive source and a poison. The cat can be both dead and alive at the same time inside the box until some outside force changes the box’s state.

Reflecting the dualism bordering on the surreal of this week’s Mutable Grand Cross, a story in the IB Times reports that physicists at Yale have made the Schrodinger’s cat scenario even more bewildering:

A team of researchers has now come up with a new twist to the experiment — one that proves that not only is the fickle feline both alive and dead until someone observes it, it is also in two places at once.

As Alice said in Wonderland, “Curiouser and curiouser…” And by the way, the universe is expanding faster than anyone previously thought. This is out there, too — a dagger found in King Tut’s tomb was made from a meteorite. Thanks to Avid Reader Annie for making sure I didn’t miss that story.

Here’s another fun one. Reflecting the long arm of the law (Saturn) square Neptune (music) square Venus-Sun in Gemini (intensely clever entertainment) square Jupiter (exuberance and excess), the NYT reports:“Police Dancing Videos Have It All: an Explosion, a Unicycle and Bagpipes” Police departments around the world have challenged each other to the Running Man Challenge — grooving to a hit from the ’90s. Best police PR campaign ever. Excellent application of Mars retrograde energy. Serious fun!

Other news on Friday was more serious, less fun. Saturn opposed the Sun at 2:38AM; it opposed Venus at 8:47PM ET.  The Sun refers to vitality. Venus refers to art, money, women, social expression. Saturn refers to cuts, controls and ambition. The May jobs report released that morning was a major downer. While the unemployment rate dipped to 4.7% (huzzah!),  only 38,000 new jobs were created — the lowest number since 2010. I love this headline: “Weak Jobs Report Leaves Wall Street Feeling Bipolar.” So in tune with planetary patterns of expansion, contraction and bewilderment — all at once.

But about that weak jobs report. Mars has been retrograde since April 17th — we could expect a dip in hiring. We had the third Jupiter-Saturn square in May, too — a downturn would not be surprising. Mercury’s retrograde all through May suggests the potential for a data glitch that may revise the count to the upside. Let’s see where see are with the report that comes out in August (for July), when Mars will be direct (as of June 30th).

This one is polarizing, too: “Aloha and Welcome to Paradise: Unless You’re Homeless.” Honolulu has the highest per capita of homeless people in the nation. And the city has been implementing serious controls.

Also on Friday: Venus was squared by rose-colored Neptune. One of Neptune’s keywords: water water water, as in floods. All this week Paris, known for rose-colored romance and art, was making headlines because of rising water in the Seine. Art treasures in the Louvre and the Musee D’Orsay were moved to higher ground; the museums were closed to visitors. There are serious floods in Texas, too. No word of any artistic value at stake; however it may be argued that Texas is one of the most idealistic, expansive-yet-controlling states in the Union.

There will be another forecast on Monday. Meanwhile, on Sunday the Gemini Moon goes void at 12:47PM ET until 11:41PM ET. Really, a day of play — rolling with the twists and flakes that derail your efforts to move forward in a straight line. Chill, chill, chill — no sleeping in on Monday.

Thank you for reading this forecast. Share it with everyone!