TGIF — and here’s to a glorious holiday weekend!

Moon entered chatty Gemini at 7:44AM ET, where it will buzz through the day without interference. At 3:18PM ET, an easy alignment between Venus and Jupiter — the planets associated with good times and good fortune — adds its special brand of joy to social interactions. This may soften the brunt of any witchy-bitchiness you may have experienced last night, when Venus (women, social graces, money, beauty) was opposed by powerjunkie Pluto.

Wiggy and potentially harsh challenges to the Moon happen overnight in the Americas, as the Moon is opposed by stern Saturn at 2:03AM ET and squared by Neptune at 3:26AM ET. Take note of your dreams upon waking on SATURDAY. Expansion and exuberance are suggested around 12:15PM ET, as Moon is challenged by jolly Jupiter, perhaps influencing your Saturday shopping sprees. With no Moon void, you’re free to snap up bargains as you see fit.

Moon goes void at 11:43PM ET on Saturday and enters Cancer at 9:20AM ET on SUNDAY, a few hours before a harmonious alignment between the Cancer Sun and visionary Neptune. This alignment adds a rosy-glow to the whole weekend…and yea verily, to the seeds ye shall plant on the New Moon in Cancer, which will be exact on MONDAY.

Just remember that before we get to the New Moon, we’ll be in the balsamic phase of the lunar cycle — a time to wrap up projects and contemplate your list intentions you will set anew on Monday. You can also plan that secret meeting or rendezvous during the days when the Moon is dark. We may feel listless or restless, sensing that something is about to begin — but we don’t know what. But hey — it’s a weekend — and a holiday weekend for the US and Canada — so lazing around a bit shouldn’t cause too many problems, right?

The New Moon will be exact MONDAY at 7:01AM ET at 12 degrees of Cancer. Light a candle, make a list and set your intentions for the next lunar cycle. 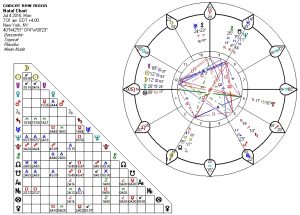 The Moon functions well in Cancer, the sign it rules. Here it seeks to fulfill a need for emotional/homeland security Y’know, core foundation concerns. Are you standing on solid ground? Where is your home? Tell me about your family, your mother, your ancestors. How are you being nourished and nurtured? How are you nurturing others?

We are challenged this month to think creatively and deeply about these core foundation concerns.  Don’t like what you’re standing on — or standing for? Sending the wrong message, are you? Then use the penetrating perspective of this particular New Moon to act accordingly.

Patterns in the New Moon chart suggest strong potential for an amplified, empowering flow of feeling and action, involving personally idealistic/visionary ideas and a rebellious push for tolerance of unconventional social expressions/attractions. That’s how I’m translating those patterns into plain English: Sun, Moon, Mercury and Venus together in Cancer; opposed by Pluto (amplification; resources) and trine to Neptune (vision); Venus trine Mars (action) and square Uranus (surprise upsets outside the “norm”).

Mars – now direct – is moving forward slowly and deliberately. Follow its lead; steady as you go. The steadiness can keep you grounded in the face of whatever upsets may challenge your agenda – and here I would be thinking of events around Wednesday and Thursday, when three of the most intense and disruptive patterns will be exact: Mercury and Sun opposed by Pluto; Venus squared by Uranus.  A gender-bender of some sort…and more.

The Sabian Symbol for the New Moon is one we haven’t talked about since the Full Moon in July or 2012.  It is “one hand slightly flexed with a very prominent thumb.” Hmmm…an inflexible thumb suggests someone with a stubborn will; a slight flex suggests a bit of accommodation, but not much. Accentuating the thumb — with a ring, for example — is usually an indication of anger issues. We become angry when we perceive that our will is thwarted or otherwise blocked. Anger is a keyword related to Mars. So are  desire and action.

Sabian Symbol guru Blain Bovee writes:  “Imagine a lecture coming to an end. This is a moment signaling a show or approval or dismay about what has been said: thumbs up or thumbs down.” And adds: “sticking your thumb out may be an attempt to hitch a ride…join in a crowd in a shared experience….It depends on your bent: thumbing your nose…or being under the thumb of a particular binding belief or opinion.” What an interesting Symbol for a month in which the two major political parties will finally host their respective conventions and formally nominate their presidential candidates. Thumbs up or thumbs down? Think it will be an easy call?

Bovee advises us “to be alert for a willful insistence regarding what counts as correct expression; proper speech; true belief. Look for characteristics of resolve, conviction, inner strength; or inflexibility; unyielding in one’s stance; fixed in one’s beliefs…(and) consider the spiritual significance of the opposable thumb.” Spiritual significance: only primates and humans, the allegedly most evolved species on Spaceship Earth, have an opposable thumb. I don’t know about being  “most evolved,” but the opposable thumb certainly gives humans a much greater range of potential when translating desire into action.

What I wrote in that Full Moon forecast posted four years ago is worth repeating now:

Well, OK. What do you want? Can you articulate it clearly and precisely? I raise this question because it has been brought to my attention via more than one source in recent weeks, and with every source saying the same thing, I will share it with you. Somewhere, years ago — I read in Eckhardt Tolle’s book, The Power of Now…or maybe it was Conversations With God…or maybe it was Illusions, by Richard Bach (all great books about how the world is quick to respond to our words and thoughts,which is how we create our reality on this Big Blue Marble)…and what I read was this: the Universe — or whatever it is that turns our thoughts into reality has an odd way of agreeing with whatever you think or say. If you are thinking, “I am no good; I am not qualified to get that job,” the Universe will find ways to agree with you. If you are thinking horrible thoughts about someone, that person will be more likely to act horribly towards you. But if someone has a reputation for acting horribly and you begin thinking of them as “lovely and talented,” for example, you will be more likely to have a positive experience with them.

Eliminating negatives such as “don’t” and “can’t” are also key in manifesting desire.  Thinking, “oh, geez, I don’t want to be late,” when you are trapped in a stalled subway train on your way to an important meeting is less effective than thinking, “somehow I’ll get there on time.”  In fact, consider eliminating the word “want” from your list of wants, as in “I want to be earning more money” or “I want to attract my soulmate.” Why? Because the Universe is likely to agree with your statement…and leave you wanting! This is why affirmations are stated as an “active positive,” as in, “I am attracting my soulmate” or “I am generating more income,” so that the response may be a huge statement of YES, YOU ARE!

ITEM  #1: Mars (cars) turns direct. Mercury (information) hits the Aries Point, suggesting prominence. Uranus and Mars are in an uneasy connection, suggesting explosive action and accidents. Thus it was revealed this week that on May 7th, a driver testing one of Tesla’s self-driving cars was killed when the car’s computer failed to distinguish a white 18-foot trailer truck against a “bright spring sky.”  I don’t know what time the crash occurred, but the Moon was void all morning, and in an approaching face-off with Mars when it entered Gemini at 12:34PM ET. The Moon was also combust — i.e., blinded by its close connection to the Sun, unable to reflect light (and greater visibility).

ITEM #2: Pluto (netherworld) opposes Venus (women, aesthetics). In the last forecast, the value of annual pelvic exams was questioned in a report making headlines. Hours after I posted it, the NYT ran a trendy piece informing us that more and more women are waxing their nether regions, for reasons that are “baffling” doctors. Planetary patterns at play — or is it simply bikini season? It is the fourth most-viewed article on the home page now.

Avoiding politics like the plague today. There will be plenty to talk about later this month. Let’s be expansive and dreamy, suggested by harmony among the Sun and Neptune, and Venus and Jupiter. On Monday, NASA’s Juno spacecraft arrives at Jupiter after a five-year journey. What do they hope to find?

And what would you hope to find in an equally stellar exploration — i.e., a discussion of your horoscope? Now that Mars is moving forward, what is your action plan? Here’s the 411 on personal consultations.