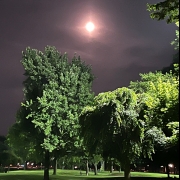 First, Episode 9 of Off the Charts: A Stellar Newscast is up and running, and I gotta say, my co-host Whitney Fishburn writes the best synopses of our bi-weekly astro-logical podcasts. Do have a look — and then have a listen. Comments always welcome! We’ll be back with more in mid-July.

I am riveted by Episode 2 of the J6 Committee’s televised hearings, which was supposed to begin at 10 AM ET. Looking at the chart for that time and place, do you think they started on time, with Venus-Uranus square the Leo Ascendant? A disruption would be anticipated, and as it turns out, a witness had to back out of testifying in person, because his wife (Venus) had gone into labor (Sag Moon trine Jupiter at 3:25 AM ET). Surprise! (Venus-Uranus).

Could an astrologer find a likely time for the actual start? Sure. Fast forward to 10:46 AM ET, with Saturn (authority) opposing the Ascendant; Venus on the Midheaven. At 10:45 AM ET, the committee members entered the hearing room, and Rep. Bennie Thompson smacked the gavel, formally starting the hearing at……10:46 AM ET. Astrology is amazing. 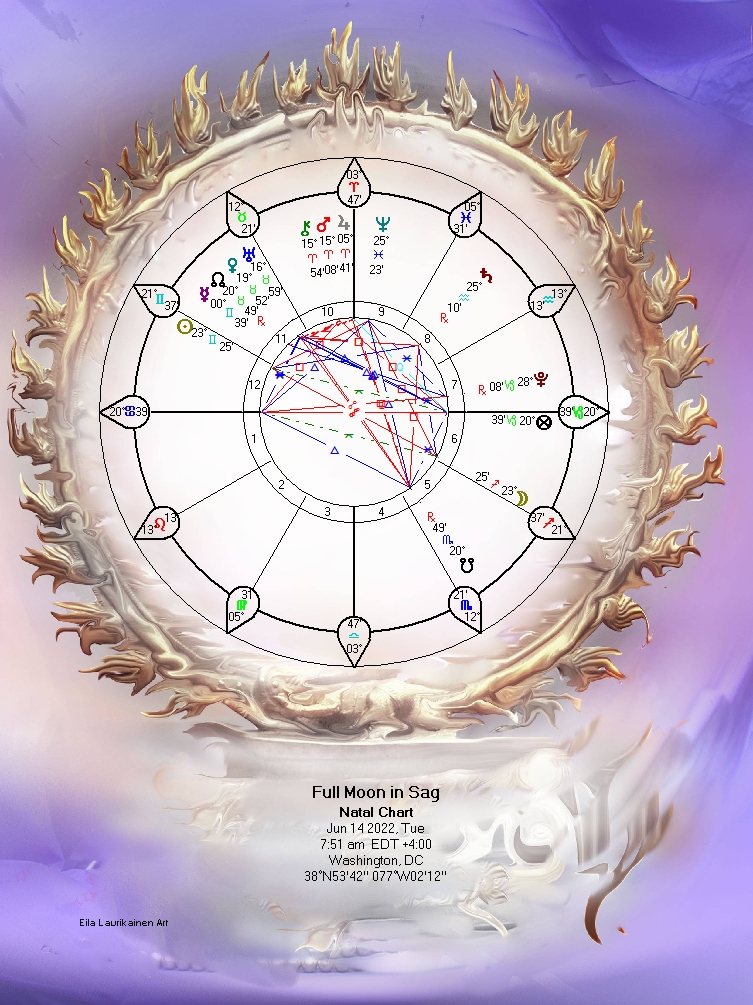 We expected a “letting loose” of action in the first ten days of June, reflecting the lack of exact contact among the planets, other than to the Moon. Here in the U.S., stories that reflected that feeling were of the stunning increase in mass shootings. But we’ve also seen a surge of resolve among those wanting to restrict access to these weapons of mass destruction, with many saying that the Uvalde massacre was “another turning point.”

Planetary patterns were aptly reflected in Queen Elizabeth’s Platinum Jubilee celebration  in the first week of June. Remember that Saturn was turning retrograde whilst squaring Her Majesty’s Saturn and Midheaven? A necessary control affecting her public status and authority would not be unexpected, and at this stage in life (she is 96), she couldn’t attend all of the pomp and circumstance. Family members stepped up to the plate, and her subjects waved to a hologram “sitting” inside her golden coach, instead of Her Actual Royal Highness. She did find time to have a spot of tea with Paddington Bear — and here it is on video, ICYMI.

Meanwhile, her great-grandson Prince Louis of Cambridge was having a no-good horrible day, with transiting Mars and Pluto all over his horoscope would lead us to expect. If Will and Kate are smart, they’ll enroll him in a course of martial arts that offers a zen perspective. Understanding a child’s needs through the potential suggested in the horoscope is an awesome way to use astrology to live life better.

Another horoscope activated by Saturn stationing retrograde, square Mercury stationing direct is Matthew McConaughey’s.  His 25 Aquarius Midheaven is receiving a visit from transiting Saturn, and this transit often coincides with being seen as an authority in whatever pond you happening to swim in. His Neptune is 27 Scorpio, and it was opposed by transiting Mercury last week, when he gave a talk to reporters in the White House Press Room about his visit to Uvalde, Texas — which is where he was born. Here is the video, which begins, “To make the lives of those lost…matter…” McConaughey described in excruciating detail the terrible carnage emergency responders faced when they finally arrived in the classroom, and since then, we’ve seen op-eds arguing that maybe the public needs to get real (reflecting the gravitas of last week’s tension between Mercury and Saturn) and actually see these images…before any meaningful action will be taken to stop the proliferation of these weapons.

The January 6th Committee’s opening night on Thursday delivered the goods, as Heather Cox Richardson explains.  The Mercury-Pluto trine exact the following night suggested persuasive investigative reporting. 20 million people tuned in to watch on network and cable television, which doesn’t include viewers like me who watched it on a streaming service or newspaper’s website. If you’re a regular reader of HCR’s daily Letter from an American, much of what was presented on Thursday wasn’t new (though I’m amazed at how many people were hearing about certain things for the very first time). What was remarkable was how clearly the committee laid out a case — with evidence — that The Former Guy was in fact the driving force behind it all. Here’s the recap from Stephen Colbert — from Thursday night, right after the first televised hearing — complete with an intro borrowed from The Muppets, bless his heart.

If you watched the hearing today (Monday), you’ll note how the story line is developing in sync with planetary patterns. In the first hour of the hearing we learned about “the red mirage” — something not as it seems! Later we were presented with evidence that TFG knew the election wasn’t stolen, but that didn’t stop him Team TFG from bombarding supporters with requests for donations for the “Election Defense Fund.” Turns out that fund didn’t exist. The money raised — $250,000,000 — went elsewhere, e.g., to Kim Guilfoyle, who was paid $60,000 for her two minute “speech” at the “rally” on January 6th. Shades of Sun square Neptune — as in leaders who may have committed wire fraud.

In other news, you may recall that planetary patterns over the weekend (Scorpio Moon; Venus-Uranus in Taurus; Mercury trine Pluto) suggested a bonanza for investigative reporters; a caution for those marching in the streets; unconventional attractions; disruptions in social expression, aesthetics, woman, money, technology, food supply – to name a few.

Finally…Good grief! Britney Spears’ first husband (Jason Alexander) was arrested while trying to crash her wedding to Sam Asghari. Britney and Jason were married for all of 55 hours in 2004, and I use that wedding event chart in a class I teach about using astrology to choose a favorable time for a significant event. It’s a prime example of Planetary Patterns to Avoid when choosing a time to get married — or do much of anything, frankly.  And wouldn’t you know it, the Moon was at 27 Taurus on that ill-fated day in 2004, and thus recently eclipsed…and triggered by Mercury last week! There are other patterns in that 2004 chart that are being activated by current patterns. I’m not surprised at all by Alexander’s “shocking” behavior. Astrology. Is. Amazing!

Here is Beth Owl’s Daughter’s Tarot Card of the Week. — always in sync with planetary patterns.

Here’s the link to the fabulous Cosmic Tip Jar, which keeps this website up and running, with gratitude to you for your support. 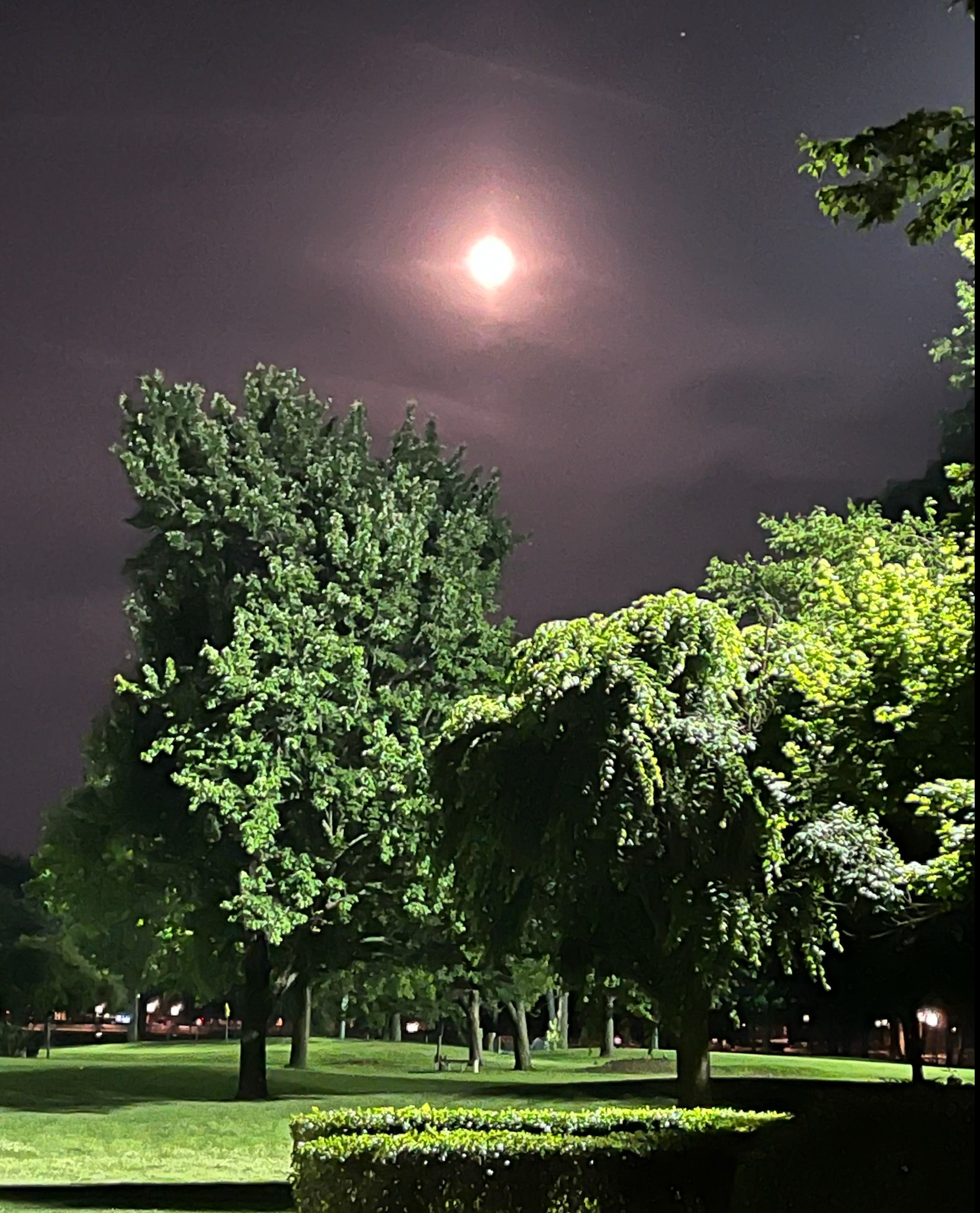