It’s full speed ahead, as a proactive Aries Moon drives the day. The only exact aspect is a harmony between the Moon and the Sun at 3:50 PM ET. Get your agenda out there.

Upsets may hit the wires the closer we get to 12:13 AM ET on THURSDAY, as the Moon is challenged by ruthless Pluto, forcing a power play or new perspective. Moon meets up with Uranus at 5:30 AM ET — there’s your morning shock to the system. Big ideas are likely to be creating buzz until 11:50 AM ET, which is when it goes void (here’s the 411 on voids).  Mountains may be made out of molehills until 8:50 PM ET; if you are wise you will roll with whatever twists and flakes disrupt your efforts to move forward in a straight line.

A need for material comfort and security drives the evening on Thursday, once the Moon enters Taurus at 8:50 PM ET. Good food, wine, music and a snuggle with your sweetie are facilitated.

Well, it’s been less than two weeks, and the inauguration chart is clearly functioning as designed, as anticipated. We have an isolated “CEO” making plenty of noise, reflecting the unaspected Sun. Thus we are becoming more isolated as a nation. We have executive orders and other actions reflecting the cold, cruel, controlling potential of Saturn in Sagittarius challenging Venus in Pisces: refugees, faith, foreigners, the media, etc. We’re seeing shake-ups to the system reflecting that 12th House Uranus. And no one can tell the this administration anything it doesn’t already know, suggested by Pluto in the 9th House. Don’t like it? Retribution is swift and sharp, reflecting the vengeful potential of a Scorpio Moon seeking to be seen as deep and masterful (the Moon was in Scorpio on the day of the inauguration). Example: the swift firing of Acting Attorney General Sally Yates, who refused to defend challenges to the executive order banning citizens from seven Muslim countries. Off with her head!

Meanwhile, the Congress is also living up to its disruptive potential, with one side literally suspending the rules of order to accomplish its agenda:

Sen. Orrin Hatch, R-Utah, the chairman of the Finance Committee called the Democrats’ boycott “the most pathetic thing.” Opening the meeting, Hatch said, “We took some unprecedented actions today due to the unprecedented obstruction on the part of our colleagues.”

Democrats consider the move in violation of longstanding rules on the finance committee, which require one member of each party present.

I found this photo of the Senate Finance Committee striking, pun obviously intended: 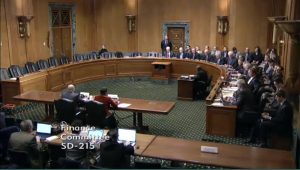 In other news, Neil Gorsuch was nominated for the Supreme Court and I will look at his horoscope in the next forecast.

Let’s end on some good news. Remember how I said that this week’s planetary patterns suggested innovations in matters related to the head and/or brain? A groundbreaking system that picks up brain activity allows “locked in” people (with ALS, for example), to communicate. So cool.

As always, I would be delighted to communicate with you. Here is the 411 on personal consultations. If you are feeling stuck or uncertain about your prospects at this stage in your life, your horoscope offers valuable insights and guidance. But don’t take it from me. Take it from a man who received a consultation as a gift:

“You have totally convinced me that your practice of astrology — whatever it is that you do — is legitimate. You have nailed who I am in an hour conversation and I want to continue our discussion!”

Thank you for reading this forecast. May you receive a ton of appreciation today and always for the value you bring to the world.