Yes, that is when this forecast was supposed to ship, but it didn’t. Thank you, Mercury retrograde!

The Moon in Pisces continues its glide through murky waters. If you’re in the captain’s seat, cooperation from the Sun and Pluto to the Moon during most of the business day will aid your quest for world domination, no matter what your passengers think. An ambitious reach or authoritative wet blanket may pull focus the closer we get to 8:33PM ET, when the Moon is challenged by Saturn in Sagittarius, righteously setting boundaries on opinions.

With Mercury at 0 Capricorn — the Aries Point — communication in matters involving the Established Order are likely to make headlines.

Oh what tangled webs we weave when a Pisces Moon meets up with Neptune (as it did last night at 11PM ET). As I type, the home page NYT headline reads, “With No Warning, House Republicans Vote to Gut Independent Ethics Office”. Right-o. Nothing screams scandale like Neptune.

And what, pray tell, has captured the home page of the Washington Times, the deceased Justice Scalia’s favorite newspaper? No sign of the Ethics Office “gutting” to be found. Instead we read, “Trump, Philippines’ Duterte seek connection as China looms.”

The politics and diplomacy may be murky, but, based on a visit to the area late last month, the infrastructure here is ready to roll.

And this would be the same Rodrigo Duterte who has admitted to personally killing other human beings.  Meanwhile, the editor-in-chief of the Wall Street Journal (Justice Scalia’s other favorite paper) made news when he said he was reluctant to call false statements made by the Tweeter-in-Chief “lies,” citing the question of “intent,” as Merriam-Webster defines it:

In other news, Neptune himself caused a scandal on Facebook when a photo of a statue of the Roman god was blocked for being “explicitly sexual.”  The blocking would be a reflection of the censorship and other controls placed on expression I expect we will see in 2017, as Saturn (control)  continues through Sagittarius (publishing, opinion). Also in this category: part of the new House rules package that will be voted on this week contains a proposal to punish Congresspersons take videos or photos of the House floor. What could possibly happen in Congress that members would not want the public to see?

Speaking of Congress, the 115th Congress begins at 12PM ET. Here’s an update on the bit I posted last time about the pile-up of planets in Pisces in this Congress’s horoscope not looking like much of a power play or upset. What does look like a screamingly obvious potential for an upset is rebel Uranus sitting right on an Aries Ascendant, opposed by expansive Jupiter. Apologies for not including that in the last forecast. I blame Mercury, which will be retrograde until the 8th. The chart is at the bottom of this forecast.

A Jupiter-Uranus opposition suggests potential for sudden, sweeping change. It’s comparable to the illumination and release potential of a Full Moon. What compares to a seed-planting New Moon? A Jupiter-Uranus conjunction. When did that last happen? In January 2011, in the aftermath of the 2010 midterms in which Tea Party Republicans were elected in swarms. Thus we could assess 2017 to be their make it or break it year.

Here’s another story that made breakthroughs during that series of Jupiter-Uranus conjunctions: A.I. How will these types of stories reach fulfillment in 2017?

I think 2017 is going to be a very good year for astrologers, as Uranus rules astrology.

Back to the chart for the 115th Congress, as I mull over the potential of that 12th House Pisces Moon, with its intuitive insider’s perspective, squared by Saturn in Sagittarius. Moon-Saturn squares can suggest discipline and ambition — but can be harsh. With Saturn in the 9th House, along with that prominent Mercury at the Aries Point, we see how these patterns are likely to be expressed in 9th House concerns: collective belief systems (religion, philosophy, law); courts, publishing, broadcasting. Then we add 12th House concerns: hospitals, churches, prisons, to name a few. So much going on behind the scenes in this legislative body.

The Sun and Pluto are together in Capricorn in the 10th, as they were in the chart for the 114th Congress in 2015. This suggests a power grab, with a potential tear-down and transformation of the Establishment.

Venus, ruler of the 2nd House and 7th House, is strongly placed in Pisces. The 2nd House refers to values and money; the 7th to partnerships and the public. While it may be strong, it is also moving to a meet-up with the South Node, suggesting a potential destructive or toxic element. As in the potential for all that is compassionate, loving and kind to be thrown under the bus. Ouch.

Last but not least, we note that there are no planets in Fixed Signs in this chart, and there is only one planet — Jupiter — in an Air Sign. The deficit of Air suggests a lack in matters of intellectual discourse and debate. “We don’t need no stinkin’ Ph.D in this here canteen, no we’re not gonna talk — or write — about it in standard forms. We’ll invent our own form of communication and intelligence, and it will be the most creative thought and communication ever.  Now can we get this thing done already?” The absence of Fixed energy suggests an entity that is likely to be active and flux — no need to hold on to cherished traditions here.

Meanwhile in Finland, a radical experiment has begun. Unemployed citizens are going to be paid a minimum basic income of $587 per month, in addition to whatever unemployment benefits they may receive. And that basic income will not be taken away once they are working again. Why? Read the article.

Thank you for reading this forecast. I know you must be dying to find out what “make it or break it” potential is suggested for you in 2017. Here’s the 411 on consultations. We will have an excellent discussion together. 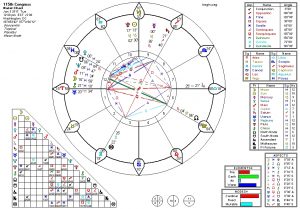 Sneak Peek at the Week; Mars-Neptune in the News and in LifeFriday 1/6/2017 & the Weekend: Fast & Furious; Power Plays and Su...
Scroll to top