Tuesday is driven by a people-pleasing Libra Moon, seeking balance, fairness and social graces — even if it requires swinging from one side to the other in order to find that balance. On WEDNESDAY  the Moon makes its weekly clash with power maven Pluto and rebel Uranus at 4:23PM ET and 10:41PM ET, respectively. The last time Moon made contact with these heavies was on Wednesday, January 11th. That’s when the Senate pulled an all-nighter and voted to do horribly disruptive things — as forecast. In the aftermath of the Cancer Full Moon, amplified by the wild and sweeping upset potential of expansive Jupiter and rebel Uranus, the Senate voted 51-48 to repeal the Affordable Care Act — every single provision of it.  The House followed suit on Friday.

Events have horoscopes, and this includes the moment the ACA was signed into law by President Obama — around 11:55AM ET on March 23, 2010 in Washington, DC. Here is that moment in time: 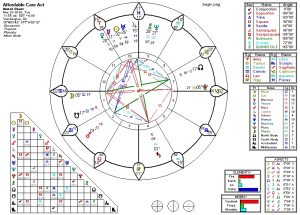 Right now, transiting Neptune is about to hit the Midheaven for one last hurrah, after other hits to the MC last year. The Midheaven refers to public status; Neptune dissolves whatever it touches — and its influence can be confusing. So we see the potential for the ACA to be wiped out, victimized, idealized. No wonder people are confused about what will happen next. Looking at future transits, there’s a lot going on in the fall of 2018 to suggest a radical overturning of the status quo, and a revolutionary intensification of the ACA’s prime directive: to create and maintain emotional security in ways that are nurturing. At the same time, we see a potential streamlining — OR — an ambitious advance. The ACA has a Cancer Moon, ruling a prominent Cancer Ascendant. Contacts to the Moon from Pluto, Saturn and the Sun suggest anguish and power plays and patriarchal opposition– apt, no? The ACA is mostly fire, water and cardinal signs. We can see how it would be likely to change form.

Your mission this week is to use the waves of energy suggested by planetary patterns for a constructive purpose, regardless of others who may be determined to do exactly the opposite. May the agenda with the highest purpose win.

THURSDAY is interesting. The Libra Moon goes void at 3:55AM ET, not to enter moody bastard Scorpio until 5:09PM ET. An all-day void suggests the potential for a crisis that turns out to be much ado about nothing — or some other twist in efforts to move forward in a straight line. Focus on routine concerns and chill!

At 4:15AM ET — right after the void begins, we’ll have a clash between Mars and Saturn — suggesting potential for disciplined — possibly militant — action and/or frustrated efforts and simmering rage. Again we are advised to seek a positive channel. This Mars-Saturn clash happens at 23 Pisces and 23 Sagittarius, respectively. If you’ve been following this forecast for a few months you know that people with planets at 22 degrees of Sagittarius, Pisces, Virgo and Gemini are personally affected by what may feel like an irritable squeeze impacting desired action.  This includes many making headlines in December and January.

Also on Thursday: at 4:24PM ET the Sun leaves Capricorn for Aquarius, sign of humanitarians and eccentrics. It clashes with the Moon at 5:13PM ET, just four minutes after the Moon has entered Scorpio. This 3rd Quarter Moon in two Fixed Signs suggests stubborn resolve involving matters of mastery, depth and control.  It may offer a super-charged challenge or piece of the puzzle that began on the December New Moon.

On Friday at 8:53AM ET, a harmonious connection between Venus (money, women, art, aesthetics) and Pluto (power, transformation) at 8:53 AM ET adds to the need for emotional depth demanded by the day’s Scorpio Moon. Could be juicy. Will write more about patterns on January 20th in a later forecast.

Before we get to the news, a special shout-out to Avid Reader Patricia, who was intrigued by my thoughts on Temple Grandin’s horoscope. Patricia has a son who — like Ms. Grandin — has been diagnosed with autism. As I’ve mentioned before, the horoscope offers valuable information about how a person needs to think and communicate. If someone thinks differently from the norm, that potential will be obvious. The horoscope of Patricia’s son was no exception. Planetary patterns suggested the needs that were driving his behavior with a clarity he can’t yet express. Significant past breakthroughs in his development were also in sync with planetary patterns, and we could look ahead and plan for the potential suggested in the months ahead. Avid Reader Patricia writes:

You have been sooo helpful and I think that because of what you said we may have found a way to give him another tool to use. Just that is huge.

In my dreams, every parent would take the time to understand the needs of their children, as suggested by their horoscopes. The investment of time and cost is about the same as a visit to the dentist. The benefits are priceless. Thank you, Avid Reader Patricia, for giving me permission to share your comments here.

Let’s start with the soulful beauty of Thursday’s meet-up with Venus and Neptune in Pisces. Mona Lisa’s smile is mysterious — and so, too, was the
“smile” that appeared on Venus last week — in the form of a massive gravitational wave. Venus refers to women; Neptune refers to spirits of all kinds — and the Washington Post reports that alcohol consumption has become normalized and women are now “drinking themselves to death.”

Take the feminine idealism of Venus meeting up with Neptune and add the militant machismo of this week’s Mars-Saturn clash and you might have a NYT home page story about all the women who consider themselves feminists — and also proudly supported Donald Trump. “You focus on the good,” said one. Idealism! As for militant machismo — or perhaps machisma — there are reportedly more than 600 sister marches planned around the world, inspired by the hundreds of thousands of women who will converge on Washington in a massive march this Saturday.

This just in: a fascinating survey of Republican men who say that it’s a better time to be a woman now than it is to be a man.  And this: men who need work aren’t applying for certain jobs because the ads are written in language that is “too feminine,” e.g.:

Job postings for home health aides say applicants need to be “sympathetic” and “caring,” “empathetic” and focused on “families.” It turns out that doesn’t lead very many men to apply.

UPDATE: Delighted to report that I wrote a long post about FBI Director James Comey’s horoscope on October 31st, anticipating the beginning of an anguished year-long squeeze in mid-January. The Justice Department is going to investigate the letter Comey wrote to Congress just before the election — the one that likely contributed to Hillary Clinton’s loss of the Electoral College.

UPDATE: allegations that the Russians are blackmailing Trump blew up over the past few days — here’s a good recap of the story as of January 12th. This story isn’t likely to go away; look for significant developments this June, when Trump’s horoscope will receive the second hit of transiting Saturn opposing his Sun. That’ll happen for James Comey, too. And let the record show that on January 14th, the exact hit of the first Saturn-Sun opposition, a Washington Post headline aptly summed up the essence of a Saturn-Sun event: “Ambitions, Meet Reality”

What’s going on in YOUR horoscope? Or your child’s horoscope? Now is the time to plan a strategy for the opportunities that are likely to present themselves for you in 2017. Here is the 411 on consultations.  We will have an excellent discussion together.

Thank you for reading this forecast — and for sharing it with the rest of the Free World.