It’s Tuesday and Mercury is still retrograde. That’s my explanation for why this forecast was written later than planned. Hopefully many of you have signed up for the Whether Gal segment that is part of Avid Reader Alison’s 2022: Year of Love podcast. That’s where I give a sneak peek of this much more detailed Sneak Peek, and the one that posted this past Sunday includes a stunning visual of the front page of the Sunday NYT that is perfectly in sync with planetary patterns. Astrology is amazing, as the NYT never fails to prove.

Before we get to the day-by-day forecast, let’s take a brief look at the Full Moon/lunar eclipse we had at 12:14 AM ET on Monday. Here it is, set in Washington, D.C. 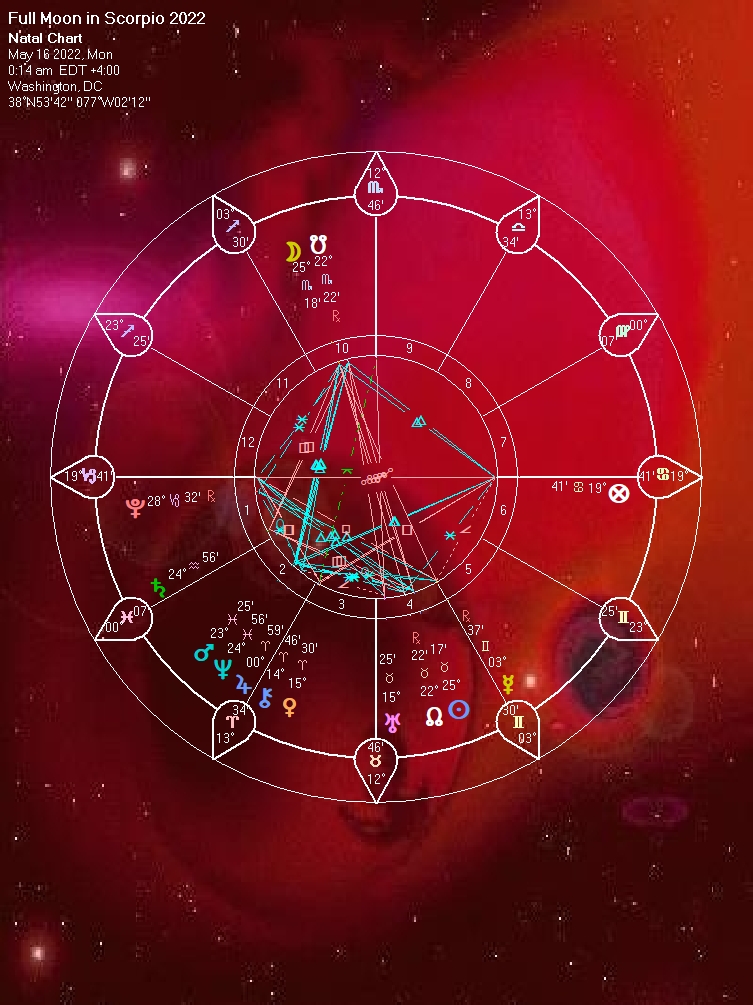 And now, the week:

Sunday’s Sun-Saturn square, combined with the Sun-Neptune sextile was expected to reflect heavy news of cuts and losses, bordering on the surreal. Why else would the Sunday NYT editors plan in advance to devote the entire front page to this:

The grimness of planetary patterns (with a surreal twist) is this photo of President Zelenskyy of Ukraine, hosting a delegation of Republican senators who were A-OK with defeated former guy’s extortion attempt and delay of promised aid to Ukraine.

Another potential symbolized by Saturn is ambitious advance. Sweden and Finland plan to apply for NATO membership, and their leaders are coming to Washington on Thursday.

In other heavy news:

The NYT Magazine was devoted to health, and articles featured Saturn’s streamlining and Mars Neptune seductive ideals, as in breast reductions, butt lifts and phalloplasty.

Add Jupiter (expansion) in Aries (firepower, crusades, aggression), and we get:

The massacre in Buffalo was one of several in the U.S. that day, and it is interesting to note how many of those murdered embodied the upside potential of Neptune, e.g., a woman who ran a food pantry; another who cared for her invalid husband; and a savior/physician killed in a church.

Tuesday’s primary races in PA are bonkers, with Dr. Oz (a Mars-Neptune name if ever there was one), a hedge fund guy,  and  Islamophobe/homophobe Kathryn Barnette duking it out for the Republican nomination, while Barnette and gubernatorial candidate Doug Mastriano refused to allow press coverage of a “routine campaign event.”  We need to keep an eye on the seeds being planted now in this new Mars-Neptune cycle, as we will experience three squares between Mars and Neptune over the next several months: October 12, November 19th and March 14th.

One story we should watch is Ben Bernanke’s opinion that the U.S. is headed for a period of “stagflation,” i.e., continued high prices, but little growth. Let’s see where we are at with that theory during the Mars retrograde period, which begins this fall. Mars retrograde can feel like a truck spinning its wheels in the mud, and three contacts with Neptune can reflect a bubble effect.

UPDATE: on Merrick Garland, who hasn’t had much going on in what we know of his horoscope since 2021. If he was going to do anything useful, we might have heard about it around May 11th. And guess what? He did something — or at least, his Justice Dept. did. “Prosecutors pursue inquiry into DFG’s handling of classified material.”

UPDATE: on Vladimir Putin. The birth data astrologers have is iffy, but if it’s correct, we’d expect a focus on core family and foundation concerns. Thus it was interesting to see an in-depth article about his family in the NYT.   It is rumored that he is being treated for cancer and that oligarchs are planning a coup. Let’s see where he’s at in early August.

With Jupiter at the Aries Point, we expected to hear news  — and we did — involving:

On Friday the 13th, Jen Psaki said farewell to the White House press corps and introduced her replacement, Karine Jean-Pierre. Heather Cox Richardson explains it all for you — except for the part about their horoscopes. Psaki’s can be found in a post from January 2021.  I’d continue this comparison but it turns out that there are conflicting reports in reputable media outlets re: Jean-Pierre’s birth date (1974 or 1977). For now let’s just observe that  Jean-Pierre’s Leo Sun will be under the influence of Saturn for the second and third time in 2022 at the end of August and mid-December, as Saturn in Aquarius opposes it. Many thanks to Avid Reader Lynn for alerting me to the conflicting dates in an earlier version of this forecast.

Finally, longtime Avid Readers may be familiar with the disembodied entities who call themselves the Hathors, and are channeled by sound healer Tom Kenyon. They had plenty to say during the Uranus-Pluto square of 2011 – 2016, most of which was warning bells and coping strategies for staying grounded in the anticipated storm. They’ve been quiet since January 2021, but Kenyon posted a message on Sunday, and given its content, it’s astonishingly in sync with that day’s planetary patterns! On the Saturn hand, the Hathors think we’re toast. OK, not quite — but they think we’re likely to downsize — as it were — before it gets better. On the Neptune hand, they offer helping coping tips, including a sound meditation (soooo Neptune!).

OK! That’s it for now — unless you’d like to take a listen to Whitney Fishburn and I dish the astrodish in Episode 7 of “Off the Charts: A Stellar Newscast,” where we break down Roe v. Wade, Samuel Alito and John McCain — sprinkled with deep thoughts, laughs and a couple of jokes. 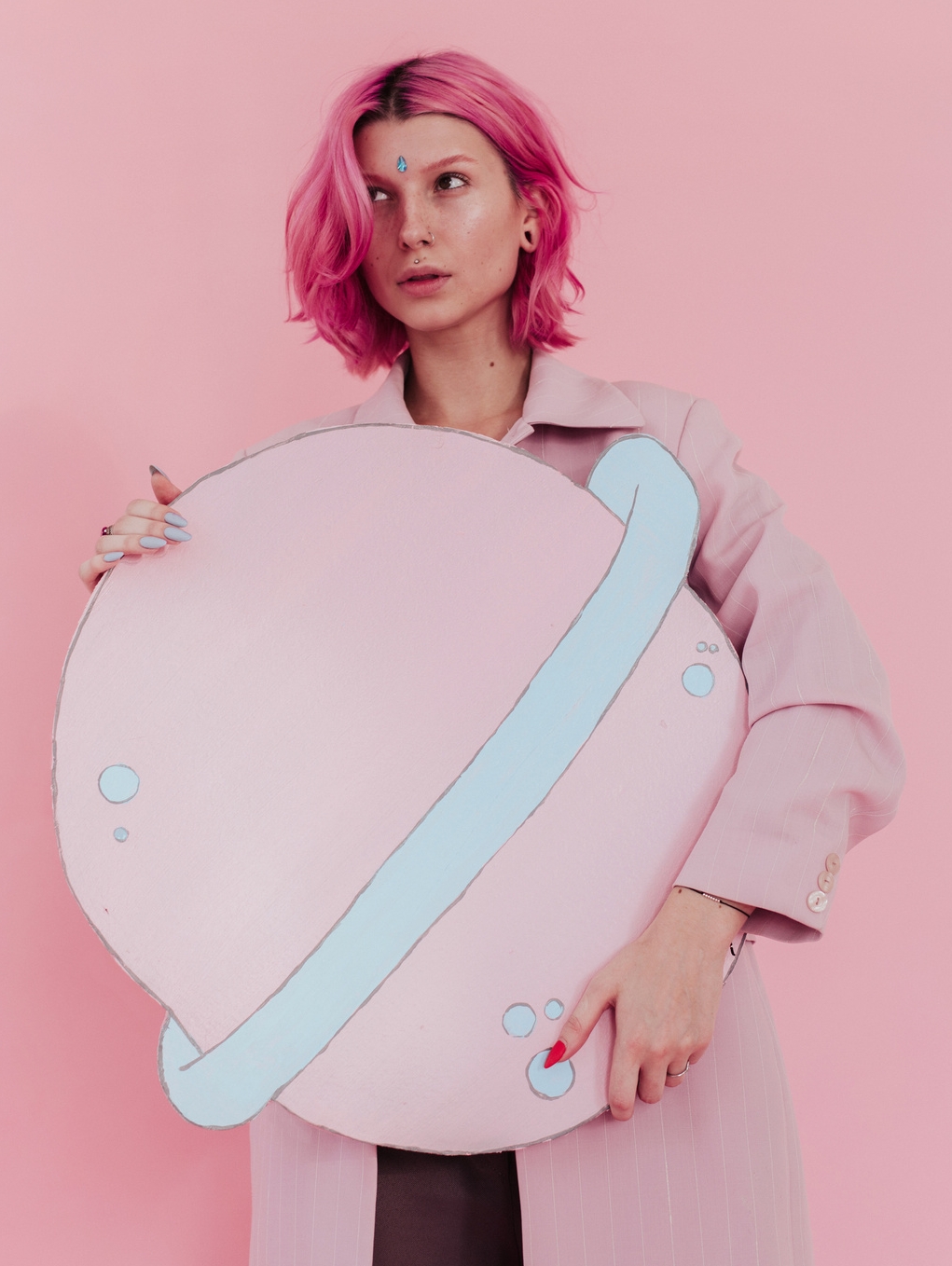 This image is worth repeating because Mercury is retrograde.

Plus, it was expensive to license, but I wanted to support the Ukrainian photographer, Hanna Postova.

Furthermore,  Saturn is hot in the cosmos now, and Mars-Neptune is aptly depicted in assorted shades of rose.

The use of this photo was made possible by the support of generous Avid Readers, Fairy Godmothers, Guardian Angels and Biggest Fans. Much gratitude!