Mercury is the star player this week, as it makes contact with three planets: Jupiter, Neptune and Pluto — today, Wednesday and Saturday, respectively. Thus, it’s a big week for planting seeds for a new vision — and as the weekend approaches, integrating potentially inconvenient facts dug up from underground. Our supporting actor is Tuesday’s square between Mars (action, aggression) and rebel Uranus, suggesting recklessness involving weapons, accidents, aviation, seismic and metaphorically earth-shaking actions. Upside potential: this assertive energy could be just the catalyst you need to break through a blockage or kick a bad habit. Examples of the Mars-Uranus square so far include:

Here’s how the week goes — and because this forecast is being shipped in the evening, you can have Beth Owl’s Daughter’s always-in-sync Tarot Card of the Week as a companion:

Here’s what you need to know about the first day of any season from an astrological point of view. The first day of each season (Spring, Summer, Fall and Winter) corresponds with the first day (or first DEGREE) of Aries, Cancer, Libra and Capricorn, respectively. Got that? Good. These four signs are called CARDINAL signs of the zodiac, with “cardinal” here suggesting (from the Latin root of the word), “that on which something turns or depends.”  Cardinal signs take ACTION. They INITIATE. Nothing happens without ACTION. And action leads to  NECESSARY CHANGE. As in a change of seasons — suggested by solstices and equinoxes. Clear?

The first day of a  season is prominent in our culture, right? We make a big deal over it — yes? In astrology, we observe that PLANETS that are at the first degree of a cardinal sign (Aries, Cancer, Libra & Capricorn), tend to pack a more powerful, prominent punch. They suggest ACTION which leads to CHANGE — prominently! The first degree of the cardinal signs is known as the ARIES POINT. Got that?

If you have a planet or angle at the Aries Point, you can expect that the energy of that planet will demand prominent expression in your life. Your friends and family — and perhaps the entire free world — will notice it. William Shatner was born with the Sun at 0 Aries. “To boldly go where no man has gone before”? I should think so — and the whole world knows him for playing that role. Prince William, Meryl Streep, Elizabeth Warren and Ted Cruz are others born with the Sun on the Aries Point — and they can’t help but stick out like a sore thumb. This is especially true of Ted Cruz, who never, ever, ever fails to make news for something obnoxious when his horoscope is triggered by any planet at the Aries Point. Here he is obnoxiously attracting the attention of law enforcement officers at an airport in Montana. Astrology is amazing.

Here is the chart for the Aries Ingress, set in Washington D.C.: 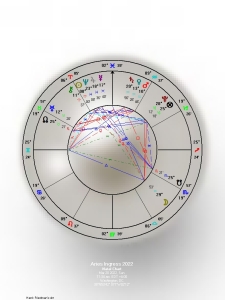 We are living in interesting times.  Thus, you must absolutely read Heather Cox Richardson’s succinct summary of the “11-point plan to rescue America” introduced by Senator Rick Scott (R-FL). The press is too focused on oil prices and (understandably) the Russian invasion of Ukraine to properly focus our attention on what the GOP plans to accomplish should they win the House and Senate in the midterms. Did you know that the newly enacted voter suppression laws in Texas resulted in 23,000 voters — 1 in 8 — having their mail-in ballots rejected?

Toss in Venus in Aquarius square Uranus (unconventional women; gender-benders in the news):

If you’d like to listen to astro-logical musings (in addition to reading this forecast), I’m pleased to offer several options. 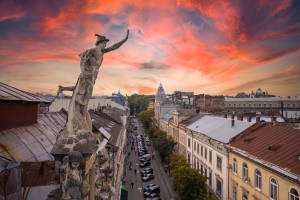 This statue of Mercury in Lviv, Ukraine was standing in January 2022.

I don’t know if it’s there now.