Venus met up with Sun in Aries at 2:57 AM ET, when matters of social expression, women, money and aesthetics may feel burned to a crisp, or as if they are scorching the earth, or otherwise manifesting with fiery and insistent passion. The rest of the day is driven by Moon in Virgo’s mission of making things perfect in every detail.  Support may come from unconventional alliances, as Moon trines Uranus at 2:16 PM ET. Note the potential tension that may arise in the evening, as Moon squares Mars at 10:16 PM ET — possibly bringing up an echo of whatever difference of opinion was in your face on Tuesday. Find a productive assertive/physical outlet.

No sleeping in on Monday. The Libra Moon will not be void. Do note your dreams, though, as the meet-up between Mercury and Neptune at 11:23 PM ET will definitely be in effect. Break out your rose-colored glasses.

I wasn’t expecting a ginormous ship to get stuck in the narrow passage of the Suez Canal, but the chart for time the Ever Given ran aground is telling (7:40 AM local time on 3/13/2021). Uranus is right on the earthy Taurus Ascendant (surprise!) and Pluto is exactly atop the Capricorn Midheaven (resistance is futile; the system breaks down). Saturn — astrology’s symbol of blockage — is square the Ascendant. Saturn is in Aquarius, a fixed sign, which means it not inclined to budge. And Aquarius refers to circulation, as does Jupiter, which is also in Aquarius, but not connected to any other planet in the chart. Thus Jupiter is running wild in this chart and in the news cycle — demanding attention for being BIG. Hmm.

The ship got stuck just hours before Tuesday’s Mercury-Mars square, so we can see the potential obstacle to travel (Mercury) from bad hombre Mars. Another astrological symbol of being between a rock and a hard place is Mercury squeezed between the North and South Nodes. It’s fascinating to read that the Ever Given was behaving in a rather pushy manner, allegedly cutting ahead of other ships waiting to enter the canal. The chart for the grounding is ruled by Venus in pushy Aries, fried to a crisp by its proximity to the go-go-go, me-me-me first Aries Sun. Venus is in the 12th house, a suggestion of having done itself in. Here is the chart (location is approximate): 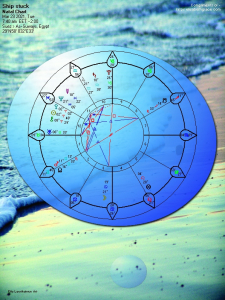 Some are saying it may take weeks to clear the channel; others hope it can be done within days. I’m not inclined to put too much energy into speculating, but do note that the end of the week of April 11th looks good for an easy flow of energy that could move mountains (or really big ships).

Israel held its fourth election in two years on Tuesday — and Benjamin Netanyahu, the indicted prime minister, still did not win enough votes to form a majority government. With transiting Pluto at the bottom of its horoscope until the end of the year, it seems that Israel will continue to struggle to determine what it stands for. Maybe by April of 2022 it will have seen the light. Here’s a write-up of Israel’s horoscope, published a while back in The Mountain Astrologer.

Meanwhile, in  Florida, a woman was rescued after being stuck in a sewer. Bizarre.

UPDATE: on Mitt Romney, whose horoscope is performing as anticipated. He’s getting the Profile in Courage Award (courage — the upside potential of Mars!) for reminding us “that our Democracy depends on the courage, character, conscience of our elected officials.” If you read my “Charts in the News” column in the Apr/May issue of Mountain Astrologer, you’re not surprised by the honor and recognition at this time.

Guess who’s not getting a Profile in Courage Award? Governor Brian Kemp (R-GA), who signed a bill yesterday making it a crime to offer food or water to anyone waiting in line to vote. This was only one provision in the 95-page law, which — explains historian Heather Cox Richardson — also puts up all kinds of impediments to voting in Georgia, and “strips power from the Republican secretary of state who stood up to [the former guy’s] demand that he change the 2020 voting results.”   Here’s another sobering take from Thom Hartmann, echoing HCR’s concern on how such measures may transform our country into a one-party state, if not checked.

The Leo Moon was void when the Georgia bill was signed, and that’s good news for those hoping the bill is much ado about nothing. But as the governor was signing the bill — behind closed doors –with a painting of a plantation and six middle-aged white men standing behind him, a warrior woman representing this week’s  Sun-Venus conjunction in Aries knocked on the door. State Representative Park Cannon is Georgia’s youngest representative, and I believe she may have a warrior Aries Moon. In any event, she was wearing a red mask and blazer — the perfect fashion statement for the occasion.

While knocking on the door of the governor’s office,  Rep. Cannon was arrested, handcuffed and charged with two felonies, and the video of the incident went viral. The Moon void suggests that these charges may go nowhere, but still…. President Biden denounced the Georgia bill, calling it “Jim Crow in the 21st Century.”

We live in interesting times. These particular developments may be disturbing, but should not be surprising, given that we are still in the aftermath of planetary cycles that were hot in the 30s. The question is, “What shall we do about it?”

I’m sorry to report that while I’ve been typing, news of beloved children’s author Beverly Cleary — another warrior woman reflecting Sun-Venus in Aries — hit the wires. She has died — at 104. Yes, Cleary is an Aries — and I bet her adorable creation, Ramona Quimby — a.k.a. Ramona the Pest, is too.

I did not find in my trusty Book of Rulerships (by astrologer Dr. J. Lee Lehman, Ph.D.),  an assigned astrological ruler for cheese. However, cheese storage is ruled by Virgo. Thus, while the Moon is still in Virgo, it is appropriate to share this story:

To find out what’s going on in your horoscope and plan a strategy to maximize opportunities, here’s the 411 on personal consultations. To treat your astrologer to a glass of something festive (or cheese), in honor of her upcoming solar return, here’s the link to the Cosmic Tip Jar. It is my eternal delight to connect with you each week, and I’m delighted you continue to find my musings worthwhile. I am especially grateful to Avid Readers who support these weekly forecasts with Faithful Monthly Expressions of Appreciation. 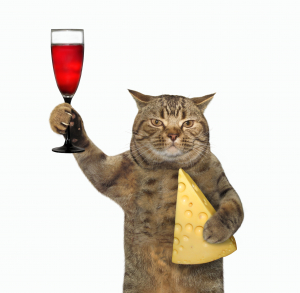