This commentary was written in September 2019 and published in the Dec 2019/Jan 2020  issue of Mountain Astrologer. It was fun to see that the expanded attention Greta Thunberg was likely to receive in early December “coincided” with her being named Time magazine’s Person of the Year. The cover photo was shot in Portugal on December 4th.

On March 2nd, around the time of the third square of disruptive Uranus to Israel’s Moon, a third election was held in Israel. The results as of April 12th  are inconclusive  — once again (!).

Also on April 12th: a riveting piece by Jane Mayer (author of Dark Money) was published in the New Yorker. “How Mitch McConnell Became Trump’s Enabler-in-Chief” came out exactly on the third square of transiting Uranus to his natal Venus-Pluto opposition — and it’s all about the money, as we would expect. 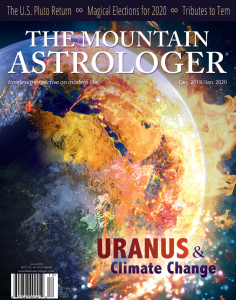