Get it done before lunchtime on the East Coast, as the Virgo Moon — driving the day with a need to get it right — goes void at 1 PM ET. Roll with the twists and flakes that may derail your efforts to move forward in a straight line. Remember that crises that crop up during Moon voids are usually much ado about nothing — and will soon work themselves out once the Moon regains its focus when it enters the next sign. Case in point: on Saturday the Leo Moon was void between 3:04 AM ET and 2:09 PM ET. When I got to my desk that morning, the floor lamp behind me wasn’t working. I changed the bulb — still no light. I’m thinking, “well, darn, I’ll have to take this lamp to the repair shop and have them replace the socket.” Within minutes after the Moon entered Virgo (and conjoined my natal Uranus), a much more meaningful lightbulb went off and I realized that the power strip thingy had mysteriously turned itself off, and that’s why the lamp wasn’t working. Flipped the switch on the power strip — et voila — case closed.

Anyhoo, get it done today before 1 PM ET — or ship it after the Moon enters Libra at 7:10 PM ET. Until then, we’ll be processing the third trine between Mercury and Jupiter (exact at 12:18 AM ET) and the third square between Mercury and Pluto, exact at 5:39 AM ET on TUESDAY. Already we’re seeing heavy news from underground — with extra gravitas supplied by the weekend’s hard-nosed square between Saturn and the Sun. Watch for heavy headlines involving court opinions, legal theories, and the media. Time for everyone to get real, and for WaPo to deliver another exclusive investigative report about the January 6th insurrection, with this one absolutely, positively concluding (according to Heather Cox Richardson’s summary, for those who can’t access WaPo) that TFG is the culpable party.

I should mention that the Virgo Moon goes void at 1 PM ET on a square to Venus in Sagittarius, suggesting a challenge between someone’s question for correctness vs. the opinionated social expression involving women, money, and aesthetics. It’s the backdrop for the action in the Supreme Court today, as it hears arguments re: the Texas abortion law it did not strike down last month.

I should also mention that once the Moon enters Libra at 7:10 PM ET, the next couple of days are driven by a need for fairness and balance in relationships. The rest of the week goes like this: 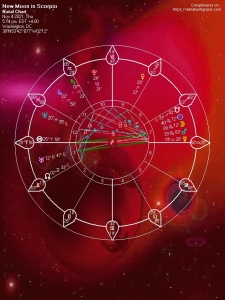 On with the weekly forecast:

If you enjoy these forecasts, I invite you to support them — by becoming a Faithful Monthly Subscriber! I type these words now because over the weekend an Avid Reader suggested I create a platform whereby value-conscious Avid Readers could toss the cost of a fancy mocha latte into…uh…hmm….perhaps…a Cosmic Tip Jar, or something like that — in appreciation for these weekly insights. Wasn’t that a lovely thing for her to suggest? Imagine her surprise when I told her (with a big smile) that I do have such a platform — and you can check it out here. Huzzah!

Add in the weekend’s no-frills Sun-Saturn square, and that’s the kind of royal wedding that happened in Japan a few days ago. You can see these patterns in this story, too:

Isolation and self-reliance are apt for a Sun-Saturn square, as well as this item about the debut novel of an author who is an only child — in which she imagines what it would be like to have siblings. Also: “the cultural factors behind falling fertility rates.”

As anticipated in last week’s forecast,  at the end of the day on Thursday, the proverbial rock had rolled back to the bottom of the proverbial hill, and the planned vote on President Biden’s infrastructure bill was once again postponed. But at least when the bill does pass, seniors on Medicare will finally be covered for their hearing aids, but not their glasses and dentures, as Michael Moore explains.  Moore’s rant aptly reflects our anticipation that these past several days were likely to be harsh for Biden. Translated into astrological jargon, what Moore is saying is: “President Biden had transiting Saturn opposing Pluto and transiting Mars opposing Moon over the weekend.” In other news, can you imagine being in the room with lawmakers having a serious discussion about which two of these three quality-of-life essentials would have to be cut from the bill? Why did hearing win out? No idea. Saturn does refer to hearing, and it also refers to teeth. Vision in the language of astrology is ruled by the Sun and the Moon. Maybe they flipped a coin re: hearing vs. teeth. Meanwhile, Avid Readers will recall that the U.S. has a Sun-Saturn square in its horoscope. That’s the “rugged individualism” in our national psyche, as well as the “you can have it all — if you work hard at it” and the “just pull yourself up by your bootstraps” philosophy of life. Translated into astrological jargon, what Moore is asking (rhetorically) in his rant is, “why does the U.S. Sun-Saturn square have to be such a bitch?”

Meanwhile, even Heather Cox Richardson took note of the fact that Republicans were literally cursing at President Biden (in euphemisms over the past several days) — and so did an on-duty pilot for Southwest Airlines.  Astrology is amazing.

Last bit of investigative reporting for the day:

An astrologer may help you find answers to some of those questions.  Here’s the 411 on personal consultations.