Happy birthday to Aquarius! The Sun entered this airy (mental), fixed (organizing) sign on Friday at 10:10 PM ET.  Keywords for Aquarius include innovation, eccentricity, friendship, humanitarian, unconventional, rocket scientist and/or mad genius. If you were born with the Sun in Aquarius, you have the energy to innovate and intellectualize with others. If your Moon is in Aquarius, you need to be socially significant — and dare I say appreciated for it. You probably need to be unusual, too — and somewhat stubborn in your strategy. Friendships are essential, even if your motto might be “I love you, but don’t take it personally.” If you were born around January 19th – 21st, you’re about to embark on a dynamic period of development. How will you declare your independence — and never mind the disruption of the status quo? Book a consult with your favorite astrologer and make a plan for 2018. These marching orders apply to those born around the 19th -21st of April, August and October, too.

The Moon has been in Pisces since Friday at 3:26 PM ET, needing to go with the flow, possibly in sync with a shimmering ideal. Empathy and compassion reflect Pisces at its finest; escapism — perhaps not so much — especially when the escape route involves alcohol and drugs. FYI, the planetary ruler of Pisces is Neptune, which has been traveling through Pisces non-stop since 2012.  It’s about to hit the halfway point of its journey — and perhaps then we will see some action taken on the awareness built over the past six years, e.g., the plethora of stories involving drugs, addiction and people eating Tide pods.

The Pisces Moon goes void with a sigh at 8:13 PM ET tonight (Sunday). Chill and get ready for the Moon to enter Aries at 1:27 AM ET on MONDAY, looking to fire things up. No sleeping in!

The first challenge to the work week kicks in at 8:41 AM ET, when the me-me-me Aries Moon is challenged by patriarchal Saturn in Capricorn. Rise to the occasion and try to put a humanitarian spin on the situation. The rest of the day has an easy flow; can’t say the same about TUESDAY, when the Aries Moon suggests a clash of thought around 10:29 AM ET, followed by a power play around 1:47 PM ET, when the Moon makes its weekly collision with Pluto. A disruption to the status quo is likely around 11:16 PM ET, when the Moon meets up with rebel Uranus (and then goes void until 8:39 AM ET on WEDNESDAY).

Mercury — the way we need to think and communicate — is pulling focus this week. It meets up with Pluto on Wednesday at 3:47 PM ET, an apt time to turn a pen into a sword. Or a word into a machete. Robin Williams was born with Mercury conjunct Pluto, and he was known for his razor-sharp wit. In the news, we can expect headlines involving sharp words, power plays and investigations revealing major dirt. Said dirt may involve publishing, academia and legal eagles, reflected by Mercury harmonizing with expansive Jupiter at 6:28 AM ET on THURSDAY.  On SUNDAY, what is revealed may be even more shocking, as Mercury is challenged by rebel Uranus. Look for themes involving gender benders, technology, astrology and aviation, too.

Also of note this week: Mars, planet of action and aggression leaves Scorpio for Sagittarius on FRIDAY at 7:27 AM ET.  In Sagittarius, Mars suggests a need for high-flying and righteously opinionated action, pushing boundaries as it goes. Mars will be in Sagittarius until March 18th. The last time Mars entered Sag was in early March 2016. What will return to the headlines that was initiated back then? Stay tuned.

The Patriots won again — heading for another Superbowl.  Quarterback Tom Brady’s horoscope continues to be hot.

Look, Ma! No government! It’s shut down. Just like that, reflecting the potential for a structural collapse noted here last Wednesday (here is an actual physical reflection of that potential: “Watching A Ridge Slide in Slow Motion, A Town Braces for Disaster”). As I type, “moderates are racing to close a deal” before the start of the work week. And perhaps they will, given the harmony between the flexible Pisces Moon and the ruthlessly effective Scorpio Mars, exact tonight at 8:13 PM ET. I just wonder about that authoritarian advance/wet blanket likely to make headlines in the early morning. Meanwhile, it should surprise no one that the horoscope for the start of the shutdown (12:01 AM on Jan 20th  in Washington DC), had rebel Uranus in a tense aspect with the Midheaven. The shutdown took some media attention away from the hundreds of thousands of women who marched over the weekend, though without any hard aspects among the planets on either day, I have not seen any news of marchers being arrested and/or otherwise harassed.

Here is the official Womens’ March website. Next critical date: November 6th. Are you registered to vote? Do it right here right NOW. Because if you don’t vote, someone else will — and then you will be sorry.

Last week’s exciting and disruptive squares between Uranus to the Sun and Venus were certainly reflected in the story about P45 paying hush money to porn actress/writer/director Stormy Daniels. Surprise — but really, who is shocked?  I read with interest the detailed interview Ms. Daniels gave to In Touch magazine back in 2011. She comes across as friendly, open-minded — detached-yet-curious about the human condition, in a scientific way. “Hmmm,” I thought. “I bet she has Venus in Aquarius — or the Moon and Venus in touch with Uranus.” Guess what? All of the above! Ms. Daniels was born on March 17, 1979 in Baton Rouge, LA. Venus in Aquarius — square to Uranus and probably her Scorpio Moon, too. Her steamy Mars in Pisces is trine to Uranus. Astrology is amazing. Patterns in her horoscope suggest a potential windfall this year…and oh — look — she’s just gone on tour…

In other news, have you seen the Google Arts & Culture app — the one that created such a buzz under those Uranus-Sun-Venus patterns? Take a selfie – and let Google match it with a work of art. Does it look like you? Me, neither: 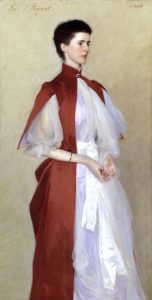 Shocking, isn’t it? But here’s what I love about this story:

Though Google introduced the feature last December, it exploded over the weekend, as Twitter and Instagram users shared screen grabs of their best—and often worst—pairings.

Meanwhile, another compelling recent read: Red Notice: A True Story of High Finance, Murder and One Man’s Fight For Justice by Bill Browder.  He was the driving force behind the Magnitsky Act — perhaps you have heard of it? Sergei Magnitsky was a Russian lawyer/auditor who worked for Mr. Browder.  He is the victim in  the murder part of Browder’s book. A former hedge fund manager, Mr. Browder is now a “full-time human rights activist.” Born on April 23, 1964 in Chicago, he is a Taurus with Moon in either late Virgo or early Libra. He has Mars at 19 Aries, suggesting a need to be a crusading pioneer. Of course he’d be the first Westerner to invest in Russia when the opportunity arose.  A strong Aries statement needs to be fearless and courageous, often on the side of the underdog.

Mr. Browder’s  Mars-in-Aries was triggered by Uranus in 2015, right when Red Notice was published. Uranus with Mars suggests risky action — and one might argue that going on a book tour and matter-of-factly declaring yourself  Vladimir Putin’s #1 enemy carries a bit of risk. Last year and continuing through 2018, Mr. Browder’s Mars will be supercharged by transiting Pluto, suggesting a greater need for persuasive effort. Here he is on C-Span last December, after testifying before Congress. He’s currently working on a movie adaptation of his memoir, so more people will know what happened to Sergei Magnitsky.  Is there anything in the horoscope that would reflect why Mr. Browder is so focused on humanitarian action in Mr. Magnitsky’s name? Sure. Sergei Magnitsky was born on April 8, 1972 in Odessa. His Sun is at 18 Aries, right on Mr. Browder’s Mars.

What connection does your horoscope have with the horoscope of a significant other, child, friend or colleague? Astrology is a powerful tool for understanding the attraction — and how the two of you can function effectively together. Here’s the 411 on consultations designed to help improve relationships.

Hmm…the Moon is void, and still no deal to settle the shutdown…and it seems they have now tabled it until noon tomorrow. But this just ran across my newsfeed, and it’s apt for the ruthless dirt-digging potential of this week’s meet-up of Mercury and Pluto. From Politico:  “The 270 People Connected to the Russia Probes,”  — one for every electoral college vote needed to win the U.S presidency…