Happy long holiday weekend — to those who are taking Monday off in observance of Martin Luther King, Jr. Day. Here’s a recap of the weekend forecast:

How to apply this nifty astro-info in your own personal world? Here’s an example from mine, which occurred in a Midtown nail salon around 2 PM ET on Friday (which some of you may have already seen on my Twitter feed):  “The chair masseur’s aggressive technique was no doubt honed in a past stint as a sous chef, pulverizing veal cutlets into scallopini. Moral of the story: bad time for a chair massage with Moon in depth-seeking Scorpio, about to square Uranus!” The experience was equally disruptive for the masseur, whose crestfallen expression clearly conveyed that a much larger tip was expected. Surprise!

I am in awe of how the Sabian Symbols of last week’s Full Moon were reflected in the headlines. Let’s review, shall we?

The Sabian Symbols for the lunation are “gondoliers in a serenade” (for the Moon at 20 Cancer) and “a hidden choir singing” (for the Sun at 20 Capricorn. So much music, music, music — and specifically, song. What to make of this? It seems terribly romantic. Is this for real? Will the fat lady finally sing? Sabian Symbol specialist Lynda Hill suggests all of the above — with a caution against believing in an expressive performance that may just be a charade. Otherwise, enjoy the ride — and remember to use your voice.

Enter Lev Parnas, one of two indicted Russian-born associates of Rudy Giuliani, who allegedly “aided him in a search in Ukraine for detrimental information on P45’s political opponents.” Right before the House finally marched its impeachment articles over to the Senate, a trove of texts and documents from Parnas’ cellphone had been turned over to the House by Parnas’ lawyer — and released by the House to the public. Later that night, Rachel Maddow aired the first of a two-part interview, in which Parnas “sang like a canary,” according to the press (if only they’d said he “sang like a gondolier”). Isn’t that amazing? Here is Stephen Colbert presenting Parnas’ song in a fun parody — with the serious parts in his always entertaining — opening monologue.

I know what you’re saying. What about that “hidden choir”? OK, then. Cue the authors of “A Very Stable Genius,” the latest expose of the horrors and abuses in the P45 administration. WaPo published a must-read excerpt yesterday, under the headline “‘You’re a bunch of dopes and babies’: Inside P45’s stunning tirade against generals.”    It describes a 2017 incident that took place inside a Pentagon sanctuary, where “wrenching” decisions have had to be made…but with an attitude of “reverence and decorum.”

You see? A choir could easily be hidden in there — and in that excerpt you can find out what they might be singing…and what prompted then-Secretary of State Rex Tillerson to refer to P45 as a “f—-ing moron.” Here is what we know of Tillerson’s horoscope.

In other news, perhaps the non-partisan General Accounting Office could be a hidden choir, too? They’re pretty low-key — and this week they concluded that P45 broke the law when he withheld aid funds from Ukraine.

Meanwhile, there was another debate among the handful of Democratic candidates who qualified. Marianne Williamson called it quits, with much of 2019’s expansive patterns behind her. Same for Julian Castro — and that Lean, Mean Meet-Up of Saturn and Pluto happened right on his 22 Capricorn Descendant. Translation: a potential loss or separation (but don’t worry, Julian — you’ll hit a nice peak in seven years)

Of the candidates left in the race, which one is most closely aligned with your personal ideology? The good folks at https://www.isidewith.com/  have updated their detailed quiz. Any surprises in your results?

Totally for-real billionaire and former New York mayor Michael Bloomberg isn’t exactly floundering in the polls, but can’t qualify for the debates because he doesn’t take campaign contributions from anyone. Interesting, isn’t it? His campaign slogan is oh-so-Saturn conjunct Pluto in Capricorn — even though there’s not a shred of Capricorn in his horoscope. Go to his website and you’ll be greeted by “Together, we’ll get it done,” and right now, he’s probably somewhere in a key battleground state (i.e., not New Hampshire or Iowa) on his “Get It Done” Express.

There isn’t a shred of Capricorn in Vladimir Putin either — according to his horoscope — with its proposed 9:30 AM birth time. However, Saturn and Pluto in Capricorn are currently reflecting extremes of power and control on his natal Mercury-Neptune conjunction in Libra. Translation: we see potential for visionary or delusional thinking in ways that need to be expressed as rational, fair and balanced. There’s a strong intuitive component to his mindset, for better or for worse. The need for extremes of power and control in his thought and communication are one of the major themes in his development for 2020. How so?

Consider this headline: (The ENTIRE) “Russian government quits as Putin plans to stay in power past 2024.”  Wow — past 2024? Sounds like the members of my co-op board. Delusions of immortality (?) wonders this NYT editorial. The news of Putin’s power surge comes on the heels of the January 10th lunar eclipse, which fell on his natal Uranus. Translation: 2020 is likely to be quite exciting, with significant changes of status in world affairs and at home (the eclipse affects Houses 9 and 4, which refer to those areas in life). Let’s see what happens around March 7th, when we should see a change in status if that proposed birth time is correct. Watch again a week later, when Mars and Jupiter trigger the eclipse, releasing a bottleneck of energy.

In other news, reflecting the humanitarian and egalitarian spirit of the harmony of Venus (money, women, art, social expression) and rebel Uranus, the state of Virginia became the 38th to ratify the Equal Rights Amendment. The ERA simply states that  “equality of rights under the law shall not be denied or abridged by the United States or by any state on account of sex,” and was too terrifying for 38 state legislatures to ratify by June 30, 1982, when it would have formally become the law of the land. I’m going on record now and saying that this, too, shall pass…and in my lifetime.

Toss last night’s shocker of a square between Mercury (information, communication) and Uranus into the mix, and you might read about the National Archives — y’know, people whose job it is to preserve and present actual facts — apologize for blurring the protest signs in an image used to promote an exhibit about the Womens’ March on Washington in January 2017. You might also read about the snazzy new uniforms for the snazzy new Space Force — that were instantly derided for being cut from cloth that is…decidedly un-spacelike.

Thank you for reading this forecast. And OMG — thanks to those of you who have discovered my newly-renovated Cosmic Tip Jar and become paid subscribers. I cherish you, dear Avid Readers and Fairy Godparents. To find out what’s in your Cosmic Calendar for 2020, here’s the 411. How will you make the most of this year’s potential to Get Things Done? 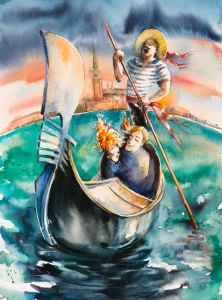