The Moon continues in Taurus, seeking to build material comfort and security. The only aspect to the Moon is a challenge from Venus at 12:10 PM ET, suggesting a potential self-indulgent clash involving values and social expression. You could take an early lunch or Moon-void coffee break  between 12:10 PM ET and 12:58 PM ET. By then, Moon will be in chatty Gemini, looking for a good story. Given that the day began with a challenging square between Mercury (how we need to think ) and Jupiter (expansion), we shouldn’t have to look too far.

We are in the dark side of the Moon, getting ready to begin a new cycle. The closer we get to Thursday, the more listless and/or restless we may feel, sensing that something new is around the corner, though we don’t know what. Wrap up projects that were started on the last New Moon if you can. Consider your intentions for the next New Moon, exact on THURSDAY at 10:48 PM ET. This New Moon is also an eclipse and it is quite potent. Details below — with more later this week.

Here are the notable planetary patterns:

UPDATE: P45’s horoscope is in a curious lull.  There are very few hard aspects — conjunctions, squares and oppositions — happening among the planets, except from the Moon. Sure, we can expect more than the usual bombast on Monday, with transiting Sun squaring expansive Jupiter in the afternoon, around the time he says he’ll have made up his mind about his next SCOTUS pick. He’ll have transiting Venus conjunct his Ascendant when he goes on the TeeVee to announce that pick at 9 PM ET, and this may sweeten the deal. Tuesday he flies across the Pond, stopping first in Brussels to intimidate our NATO allies, but the next charged aspect in his horoscope doesn’t happen until he meets his match — Vladimir Putin — in Helsinki on the 16th. On that day, transiting Sun meets up with his natal Saturn, which — according to Robert Hand’s essential tome, Planets in Transit — suggests

“tending to tasks you may not want to do but must in order to fulfill obligations to others…what you accomplish today may have more lasting significance than could be accomplished under any other energy. Professional advancement may come under this transit…(it) often brings new responsibilities or reminds you of unfinished matters from the past that have to be finished now.”

What all of that means may not be immediately known, as apparently no other American will be in the room to listen in on the conversation.

Meanwhile, P45 is scheduled to visit the Queen on Friday the 13th. Apt?   Perhaps for Her Majesty. Transiting Saturn will exactly square the Queen’s Mercury (how we need to think) around 4 AM BST on SATURDAY. Saturn in hard aspect to Mercury, suggesting a need for mental focus and heavy thoughts. Gravitas, indeed.

There are four candidates being bandied about as possible SCOTUS contenders: judges Raymond Kethledge, Brett Kavanaugh, Amy Coney Barrett, and Thomas Hardiman. We don’t have birth times for any of them, but of the lot, Hardiman’s horoscope has the most visible action, followed by Barrett, Kavenaugh and Kethledge. But again — no birth times — so we can’t completely assess potential. While not as obviously active, Kethledge’s horoscope has interesting synastry with P45’s.

Reflecting the “big ideas/communication” potential of Monday’s Mercury-Jupiter square, mixed in with the “news from underground” of the Sun’s face-off with Pluto: “A journalist’s conscience leads her to reveal her source to the FBI. Here’s why.”  Fascinating.

Extreme weather. Between last Thursday and Sunday we had a Grand Trine among the Sun, Jupiter (expansion) and Neptune (floods), a pattern suggesting excess. Record rainfall in Japan has caused severe flooding, landslides and mass evacuations. Scores have died. I wondered about a possible connection between planetary patterns and Japan, and ran a chart for Friday’s Third Quarter Moon, set in Tokyo: 4:51 PM JST 7/6/2018. There is a connection! I could not help but notice the difficult relationship among Neptune and the angles of the chart, as well as the positions of the Sun and the Moon. Perhaps an Avid Reader in Japan will want to comment on it….and take a look at the chart for the June 28th Full Moon chart set in Tokyo, too. Arigato gozaimasu! 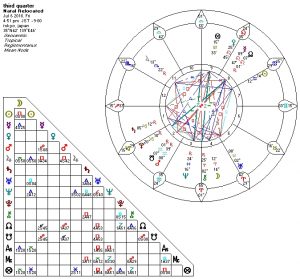 U.S. Opposition to Breast-Feeding Resolution Stuns World Health Officials   Just read it. Because this is who we are right now — at least officially, in the world arena.  Yet another manifestation of the P45 inaugural chart, yes? In other news, as of June 26 there are 116 women who are not incumbents who are on the ballots for the November 6, 2018 midterms elections. Thanks to WaPo for putting them all together here.  Are you registered to vote??? Register today — and re-register if you have moved since the last time you voted –– or if you have not voted in a while (because in some states, including New York, it’s “use it or lose it.” )