Today is an interesting mix. Lots of action in the wee hours of the morning in the Americas, with challenges suggested by the First Quarter Moon at 1:59 AM ET, in touch with Neptune and Jupiter. More of the same from Sunday.  The Virgo Moon, seeking exacting perfection in every detail, went void at 8:01 AM ET…and won’t enter the next sign — Libra — until 8:29 PM ET. If you wanted to sneak in an extra vacation day, this would be a day to do it. Otherwise, stick to routine and avoid impulse shopping sprees. I find writing flows easily during long Moon voids — if drafting or brainstorming needs to be part of your work flow today, have at it.

Meanwhile, the Sun’s opposition with Jupiter at 11:28 AM ET can be cited as the source of any weekend indulgence from which you are now recovering. For me it was a S’mores Sundae — shared with a friend.  It was the last thing on my mind when I ordered my healthful vegan entree at the local Bareburger, but as it turned out, a feast of graham crackers, marshmallow and hot fudge over vanilla and chocolate ice cream couldn’t be helped. Yum!

Today’s Sun-Jupiter opposition amplifies whatever beautiful ideal or flat-out falsehood made the news over the weekend. “President P45 has made 10,796 false or misleading claims in 869 days,” WaPo posted at 3 AM ET. A few hours later, P45 accused the NYT of “sick journalism” for reporting that key components of an immgration deal with Mexico that was announced on Friday had actually been agreed to several months ago. Immigration and big lies: both are likely potentials during this Jupiter (big) in Sagittarius (foreign, press) square Neptune (illusion, ideal, lies) in Pisces (refugees, victims). Clear?  Note that the last time Jupiter and the Sun were in a tense pattern was in March, so stories that were hot back then may be hot again now.

The closer we get to the weekend, the more ruthless and militant the action and opinions are likely to get. Here’s how the week progresses:

Finally, WaPo columnist Jennifer Rubin thinks she knows why Elizabeth Warren and Pete Buttigieg are surging in the polls — and she’s got half of it right. According to her, both are delivering messages of faith and optimism, including religious faith. Yup. But does Jennifer Rubin know WHY that message is likely to be so well received now? Nope! So where do we see that need for a message of faith and optimism? In the 2019 Jupiter-Neptune square!! We also see in the horoscopes of Warren and Buttigieg that they have the ability to serve as effective and empowered messengers at this time. Robert J. Samuelson is also a WaPo columnist, with an opinion expressing the streamlined focus of 2019’s approaching Saturn-Pluto conjunction in Capricorn: “Democrats are peddling fairytales.,” says he. Such a Debbie Downer!

What’s going on in your horoscope? Are you more affected by the expansive optimism of the Jupiter-Neptune square or by the lean, mean focus of the Saturn-Pluto conjunction? Find out in a personal consultation. Here is the 411.

Thank you for reading this forecast — have s’mores!! 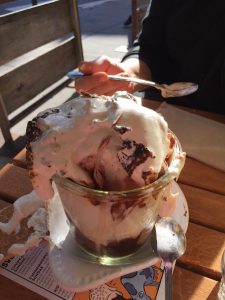