We’re off to the start of a four-day work week, one with no major aspects (trines, sextiles, oppositions, squares or conjunctions) among the planets, except for planets making contact with the Moon. Does a week of relatively quiet activity suggest nothing dramatic will happen? I used to think that was a logical expectation, but now I think of these planetary lulls as giant shelves of ice in the Antarctic. They’re there — all solid and stable. And then a big chunk just falls into the sea, with no visible alert. We shall see.

The Moon is still  in Gemini, buzzing around, sharing information.  It is challenged by an opposition from taskmaster Saturn at 12:10PM ET.  A downer or an ambitious reach, maybe a combination of both.  Innovative connections and communications are favored in the afternoon, courtesy of an easy connection between Moon and Uranus at 4:30PM ET. Information overload may set in as the Moon squares Jupiter at 10:02PM ET.

At 11:17PM ET, Venus leaves status-conscious Capricorn for the much more egalitarian sign of Aquarius. Huzzah for you if you happen to be an Aquarius, as your dance card may be fuller between now and March 12th, when Venus enters Pisces. “I love you, but don’t take it personally” is immediately understood by people with many planets in Aquarius, an airy, mental sign which so deeply understands and values friendship. Who’s yer buddy? Venus is Aquarius is happy to help.

On Wednesday, Moon goes void at 11:37AM ET and enters Cancer at 2:24PM ET. On Thursday evening the Moon makes its weekly clash with Pluto and Uranus at 8:34PM ET and 10:42PM ET, respectively. Upsets, power plays and other excitement that may disrupt and/or empower our need for emotional and/or home security — or at least make headlines.

Sun leaves Aquarius for Pisces at 12:34AM ET on FRIDAY. Moon goes void at 9:36AM for the whole business day. Stick to routine. Party time begins at 9:17PM ET, when the Moon enters drama queen Leo. TGIF! That’s the lay of the astrological land this week — march forward with your plans for world domination.

And now the news.

We’re sure to be yakking about Monday night’s Grammys, given the Moon’s challenge to Neptune (music and glamour) at 1:15AM ET Tuesday.

Meanwhile, the story dominating headlines — at least in the US — was the death of Supreme Court Justice Antonin Scalia. Justice Scalia was found dead — presumably of natural causes in his sleep — at a luxury resort in Texas, where he had been invited to join a private hunting party. We should all be so lucky to spend our last day on Earth doing what we love.

Weird, because in the draft of my last forecast, I mentioned Justice Scalia — then edited it out. I first wrote about his horoscope in 2011, when he rear-ended another car on his way to work. I thought for sure I’d noted in 2013/4 how empowered and daring his need for assertive action would likely become in 2014 & 2015, with transiting Uranus and Pluto supercharging his natal Mars at 14 Aries.  Can’t find the post to link, alas. Question is might there have been any other astrological measurements that might suggest a potential health concern? Plenty of books  have been written about astrology and health. They are fascinating to read.

Perhaps you recall in my last post — about Michael Moore’s sudden bout with the flu — that Mr. Moore had transiting Mars in Scorpio making a stressful aspect with his Leo Ascendant. This can suggest an outburst of energy that results in a health event. The Ascendant refers to one of the health markers in a horoscope. Justice Scalia had a similar pattern — between his directed Ascendant and his natal Mars — and this has been in effect for months, not just a few days.  Mars in is Justice Scalia’s sixth house and rules it, too. The sixth is another reference to health in a horoscope, among others. Caveat: Mars-Ascendant aspects can also suggest a more productive release of energy, such as beginning a new exercise regime.

Interesting to note that on Friday, February 12th, Justice Scalia had the second hit of transiting Jupiter in Virgo opposing his natal 21 Pisces Sun. In recent days he had transiting Jupiter square his natal Jupiter at 23 Sagittarius. Jupiter refers to expansion — for better or for worse. The Sun refers to the heart and vitality. Back in December and early January, you may recall that Jupiter was at a virtual standstill at 23 Virgo, preparing to turn retrograde. We could imagine him being overextended, and in conflict with another measurement (Saturn square Saturn), suggesting a need for limits and control.

Interesting to note the Moon was in Aries on the 12th, traveling through his Sixth House. It would have crossed his Descendant and squared Pluto during the night. I can’t remember which one of my teachers opined that the Ascendant represents the point where the soul enters the body; the Descendant is where the soul exits. Interesting thought. There are other measurements I could note in Justice Scalia’s horoscope which add to the suggestion of a health concern, but you get the idea.  And “suggestion” and “potential” are the operative words.  Modern medicine, with its miracle drugs and technology, has a funny way of helping people survive health crises that would have been fatal in years past — a good thing, don’t you think?

Did you know that Justice Ruth Bader Ginsberg and Justice Scalia were the best of friends? An odd coupling, and on opposite sides of the political spectrum, but there you have it. Something to think about with Venus entering Aquarius later tonight. Here is Justice Ginsberg’s tribute to Scalia. How interesting that they were both born with the Sun in Pisces and the Moon in Scorpio.

Meanwhile, in Barack Obama’s horoscope, we see transiting Mars about to challenge Uranus, the ruler of his Ascendant this week…and then it will make the first of three conjunctions to his Midheaven (status, career) on March 2…with the rest on May 30th and July 30th. Rest assured he will take action. Last week’s New Moon at 20 Aquarius conjoined his Ascendant; Mars exactly squared it. The battle is on — and I’d argue the surreal meltdown potential of it all is related to transiting Neptune squaring the U.S. Ascendant, as I’ve noted many times before. Neptune-Ascendant phases can be surreal, disorienting, bewildering. Here are some thoughts…and here are some others.

UPDATE: on those nifty gravitational waves from last week. Avid Reader Katya sent me this cool BBC link with more info, (if you’re still not clear what the fuss is all about) and these deep thoughts:

I would love to hear some of these astronomers muse open-mindedly about the subtle physical waves/effects of planets in our system…I’d think the gravity ripples “unchanged” throughout space, would lead one to reconsider the typical divide between astrology & physics …

I would like to hear musings about subtle physical waves and astrology, too. There is so much we do not know. Until then, I see astrology as a symbolic language which conveys information about time and space. No idea why it works with such accuracy. But it does.

UPDATE: George W. Bush, whose horoscope we expected would become more empowered in 2016, as transiting Pluto moves on to square his 16 Libra Moon, did in fact hit the campaign trail on behalf of his brother, Jeb!

NEW TOPIC: Thanks to Avid Reader Nick, who thoughtfully sent in this item reflecting the diet-consciousness of Jupiter’s sojourn through Virgo: a supermarket offering healthy food at affordable prices. Meanwhile, did you see that last week France made it illegal for supermarkets to throw out unsold food? Now it must be donated. Tres bien fait!

PSA of the Day:  if you’ve been following this forecast for several months, you know I’ve mentioned The China Study  a number of times.  In October I decided to switch to a mostly all-plant diet. Consider it my Jupiter in Virgo new & improved diet experiment. Protocols: no meat and fish. Maybe an egg a few times a month — good to have a source of vitamin B-12. Goat cheese on occasion. Won’t give up half & half in my coffee/tea, wine, plain yogurt or chocolate. More important, no oils — including olive oil and olives. Result: I now weigh what I weighed in high school. Don’t feel deprived at all. Stunned to see how much flavor food has when it is not cooked in oil or butter! Now I saute in vegetable broth — it’s delish! Clean-up is so much easier without the grease. I know this regime may not be for everyone, but if you have questions, feel free to email me…

…and please reach out if you are dying to know what’s going on in your horoscope! We will have such an excellent discussion together.  Here’s the 411 on personal consultations.  If we have not spoken in over a year, you’re due for a check-up. Yes, astrologers are like dentists. Book your six-month and yearly cleanings, count on us to be there for you when you are going through a cosmic root canal. Oh — and if you just love this forecast and would like to let me know how much you appreciate its value, donations are always welcome, with much, much gratitude.

And now, check out these cosmic space travel posters NASA is giving away free…just for you. 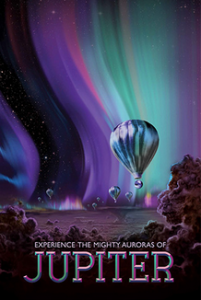