Tag Archive for: jupiter in aries 2022 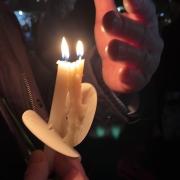 It’s a big, big week in cosmic happenings, even more than listed in the last forecast:

A pause, while we review the potential of Jupiter’s second ingress into Aries in 2022 (compared to Jupiter in Pisces), originally posted at the end of 2021:

Jupiter will remain in Aries until May 17th. Then it enters Taurus, where it will reflect efforts to give material stability to Jupiter in Aries’ fiery expansion. Meanwhile, I expect the summer months Down Under will be as hot, hot, hot as this past summer in the Northern Hemisphere. If you were born in the first nine days of just about any sign — but especially Aries — congratulations, you’re getting the third hit of Jupiter’s potentially expansive abundance between now and mid-February, as Jupiter continues to retrace its retrograde steps.

A pause, while we discuss the Winter Solstice.

In the Northern Hemisphere, days will be getting longer and nights will be getting shorter. If you live south of the equator, you are celebrating the first day of summer.  In any case, with the Sun in Capricorn, we move from big-picture thinking (Sagittarius) to practical application. What will we build that will materially define our collective philosophy? Think corporations, governments and maybe The Junior League. Think status and ambition.

Equinoxes and solstices are also prominent. We make a fuss over them, right? In Japan, the first day of each season is  a national holiday. How cool is that? Thus, in a horoscope, a planet or angle at the Aries Point needs to be prominent. Off the top of my head, other people with planets or angles at the Aries Point include Meryl Streep, Khrystyne Haje, Prince William, Steven Mnuchin, Harvey Weinstein, Andrew McCabe and Edward Snowden.

A chart for a new season suggests the game plan for the next three months. Here is the Winter Solstice chart set in Washington, D.C.: 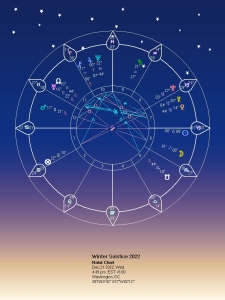 Here is Beth Owl’s Daughter’s always-in-sync Tarot Card of the Week. Easy does it!

Now that the January 6th Committee has held its final hearing, it is interesting to note that:

Speaking of ethics, the most mind-blowing story I’ve read today is about George Santos, a Republican who prevailed in his second attempt to win a seat in Congress. He will represent parts of Long Island and Queens if he actually serves. Today the New York Times reported that Santos has repeatedly lied about his education and work experience. He never graduated from Baruch College or NYU. He never worked at Citigroup or Goldman Sachs.  Here is his bogus website. So how in the world have none of these total lies been reported on…by the press or any opposing candidate…until now?

That’s a rhetorical question, because obviously we can see the potential snake oil in what we know of Santos’ horoscope — if he really was born in Queens on July 22, 1988 (three months before Hope Hicks). Mars square Neptune is always an alert for possibly getting carried away by one’s own spin. Santos would have a knack for spin with a regal Leo Sun (who dares challenge a king) in an easy flow with Jupiter in blah blah double talking Gemini, which in turn is in an easy flow with action hero Mars in highly efficient Aries. Looking at current transits in what we may know about this horoscope, it’s clear he’s due for a breakout, a break down and heavy responsibility.  if he will be Time will tell if he will be further empowered or held accountable. He was the chosen candidate of the party that supported Herschel Walker, after all. Such interesting times.

There is a bomb cyclone weather pattern developing over much of the country this week. With Jupiter moving from Neptune to the Sun, this week — and demanding prominence at the end of Pisces, this is not surprising. We’ve seen patterns like this before.

Stay tuned to this channel for more on Friday’s New Moon, and a recap of all the big stuff that’s likely to pull focus this week.

Here’s the 411 on personal consultations, written reports and gift certificates.

Yes, I still have Mercury Rx bookmarks — $6.99 for three and your snail mail address will get them in the post. Toss the coin into my Cosmic Tip Jar as a Joyful Random Expression of Appreciation. 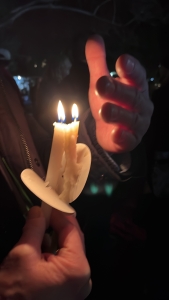 Happiest of holidaze to you.