Moon entered Capricorn less than an hour after midnight on Saturday, driving the weekend with a need to Make Things Happen, all the better to enhance social status and executive authority. At 6:13 PM and 7:13 PM ET pm Sunday, Moon met up with Jupiter and Pluto, suggesting the start of an expansive power play or catharsis.

(Exhibit A of a catharsis was the sad news that Broadway actor Nick Cardero passed away. The 41-year old actor was hospitalized three months ago and fought an especially grueling and gruesome battle. He leaves behind a wife and one-year-old son. Hollywood is grieving; “heartbreaking” is trending on Twitter. Exhibit B: the Atlantic Coast pipeline project has been canceled; environmentalists rejoice!)

No sleeping in today (Monday). Moon goes void at 5:35 AM on a sobering meet-up with Saturn. We’re likely to see the heaviness in the headlines — as in this NYT report, “The Fullest Look Yet at the Racial Inequity of the Coronavirus,”   in which we learn that Black and Latino persons in the U.S. are three times more likely to get Covid-19 twice as likely to die from it. The NYT had to sue to get these statistics from the CDC — and Dr. Fauci is being suppressed and dissed by governmental officials (perhaps a reflection of transiting Neptune square his Mercury, dissolving his ability to communicate.) Not only that, but (as anticipated):  “Seven-day average case total sets record in the States for the 27th straight day.”   And “239 scientists outline evidence that Covid-19 is airborne.”

That being said, if you’re reading this now, you are still on Planet Earth — presumably for a divine purpose, so take heart! Every problem you hold in your hand has already been resolved — you just haven’t gotten to that point in time. But you will!

At 6:08 AM ET, Moon enters Aquarius, where it travels without speed bumps all day. Aquarius is here to be of social significance, intellectually innovative and hang with its collective. Arise, go forth and RE-connect, honoring the ongoing Mercury REtrograde.

If you find these forecasts insightful and entertaining, Avid Reader Diane insists I invite you to support it. And with this week’s Mercury-Mars square directly affecting my horoscope, I’m down with this crusade.  A Faithful Monthly Expression of Appreciation serves as a reflection of your most excellent values.…worth the cost of a fancy latte or modest glass of Prosecco. Personal notes of gratitude are always forthcoming — and sometimes returned with heartwarming replies, such as this one from Avid Reader Lynn:

You are so welcome, but it is I who is getting the most from this relationship! I truly appreciate your insights and ALWAYS open your emails first when they appear. You manage to strike an optimistic tone no matter what crap seems to be happening and I appreciate that as well, because the times can seem pretty dire lately.

I am honored to serve as a persistent ray of sunshine in interesting times.

Before we continue with the news, let’s talk about Sunday’s Full Moon/Eclipse. It happened at 12:44 AM ET, and from Washington DC, it looked like this: 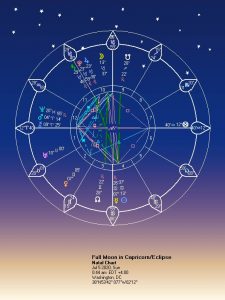 When the Cancer Sun is opposed by a Capricorn Moon, we see a polarity, illumination and release regarding the will to establish home/emotional security versus the ambition of making that happen. How can we make this work? What and who will be used to get the job done? Never mind how anyone feels about it.  The Sabian Symbols for this lunation are — for the 14 Cancer Sun, “a very old man facing a vast dark space to the northeast” and — for the 14 Capricorn Moon, “an ancient bas-relief carved in granite.” Yes, the Sun and Moon are at 13 degrees 37 minutes of their respective signs, but we always round up to the next degree when using Sabian Symbols. That is the rule, mmkay?

Sabian sage Blain Bovee’s take on 14 Capricorn — the Moon — is here and it’s deep. “Relief” may be a challenge to “sharpen awareness” and define the self regardless of identification with collective beliefs, e.g., politics and religion.  It may also be a release from heavy concerns. “Ancient” suggests that current concerns are the same as they ever were — timeless and all too human.We last encountered this focus  back in September 2019, when Saturn turned direct. That’s when Adam Schiff issued a furious subpoena for the illegally withheld whistleblower letter about P45’s abuse of power, which led to P45’s impeachment. It was also a focus in July 2001 — another lunar eclipse.

14 Cancer — the Sabian Symbol for the U.S. Sun — is also deep. Who is this  “very old man facing a vast dark space to the northeast?”  Winter, hermit and transcendence are words that come to mind. There is a sense of awareness that all of the material hustle and bustle barely scratches the surface, set against the backdrop of All That Is, as Bovee seems to suggest here.  We are advised to watch for — in the next several weeks —  “loners, chiseled faces; principles carved in granite…existential intensifiers; gloomy dispositions; relief in solitude; stony silences; the Mayan calendar (!); slight elevations that make a world of difference.” This is a partial list; I highly recommend Bovee’s wonderful book — and if you’re going to spring for that, but have yet to support this forecast, you may do so here.

Chiseled faces that immediately come to mind are the faces of four dead presidents carved in Mt. Rushmore, where P45 gave a mangled speech defending the rights of statues and warning against “the new far-left fascism.”   He’s under especially bizarre, disruptive and anguished transits this month, as I will explain. Speaking of fascism, have you seen his campaign ad that features a Nazi symbol, along with the campaign swag that features yet another? If not, it’s because they’d rather have you focused on stones and statues. How curious to see those themes echoed in the symbols for the lunar eclipse.

I did not watch the speech, being far too entranced by the film adaptation of Hamilton on DisneyPlus. Double Capricorn Lin Manuel Miranda is perfectly cast, as Alexander Hamilton was also a Capricorn, and may have Moon in Capricorn, too — just like Manuel-Miranda.

Back to the eclipse…

A lunar eclipse suggests opportunities to release what no longer serves. If you are unable to release it consciously, forces beyond your control may take it away. Wherever 13 degrees of Cancer/Capricorn falls in your horoscope is an area in your life where you may be invited to clean house. If a planet or angle is connected to those degrees, issues related to that planet or angle are likely to be involved (in the U.S. horoscope, affected areas include money, values, self-worth, joint ventures, death and transformation). When might you expect such a release? Consult your astrologer for details.

Meanwhile, if you’ve ever been curious about the history of Mt. Rushmore, including why those four faces came to be carved into a mountain, Heather Cox Richardson explains it all for you.

And now, the official news.

Let’s start with people who made news (as anticipated) last week, as retrograde Saturn returned to Capricorn. First on deck: Kellyanne Conway, whose 15-year-old daughter Claudia made waves when her anti-P45 Tik Tok videos and frank revelations about family dynamics went viral. Wow! Second on deck, Jeffrey Epstein, whose horoscope continues to function even after death. As Saturn conjoined his Sun for the second time this year, his alleged accomplice — Ghislaine Maxwell — was arrested and charged, thanks to the efforts of the SDNY (the Southern District of New York). And what about Nikki Haley, whose Sun was also affected by Saturn. Well — she’s in the news for having an opinion about India banning Chinese-made apps, so there’s that. And a recent poll concluded that if P45 chose her for his VP pick, only 27% of Republicans polled would mind. OK, that’s giving her some gravitas, Saturn-style to the upside. Finally, a super-fun follow-up on actress Khrystyne Haje, whose Sun was affected, suggesting a potential need to stand up for oneself. How did she do that last week? She launched a website. Astrology is amazing.

We do have a birth time for Maxwell, and she is a poster child for what can happen in the aftermath of several eclipses. Here is her horoscope. Sun in Capricorn driven by a Leo Moon, needing to be loved and adored. She wears the mask of a pixie chatterbox, a.k.a. a Gemini Ascendant. Her Sun was eclipsed in December. Her Mars is at 0 Capricorn — the Aries Point — and was eclipsed on June 21st, then activated when Mars entered Aries last week. And just like that, she was arrested. Her life is forever changed. Oh — and she’s in the middle of her second Saturn return.

I’m sad to report that Carl Reiner’s horoscope was activated by recent eclipses and by transiting Mars. We don’t have a birth time, but his 29 Pisces Sun was destined to command attention — and he regaled his audience of 390,000 Twitter followers until the day he died. The legendary comedy writer/actor passed away last week at 98.  He is missed.

UPDATE: on  P45,  because a pattern that was hot in February is back for Round Two — and then some. On Feb 6th Pluto, planet of extremes, opposed his Saturn (authority; control). This is one of the most anguished patterns one can have, like getting the Queen of Spades in the card game,  Old Maid — only with much heavier potential losses. The second Pluto-Saturn opposition is on July 12th. Without getting into each and every detail, patterns between now and the end of this month are ripe for sudden upsets; smoke and mirrors; continued surreal spin; confusion/delusion (two hits); diffusion of physical and mental energy — and still more extreme efforts to establish control. Areas affected: foreign affairs, publishing, court opinions, joint ventures/investments, inheritances, taxes, core family concerns.

I have no idea if Kanye West’s announcement that he’s running for president as an Independent, qualifies as a sudden upset or a extreme measure of control…but West’s run would seem to only benefit P45, just like Jill Stein‘s Green Party run did in 2016. We last looked at West’s horoscope in 2018; Neptune is still going strong — and there’s nothing funny about it.

Jupiter-Pluto in Capricorn’s expansion of power in the extreme:

In the language of astrology, Saturn refers to hair and the color black. As it re-entered Capricorn:

Finally, a follow-up on a video by Dr. Gwendolyn Reece, which  I shared a couple of weeks ago — via the fabulous Tarot Diva Beth Owl’s Daughter. Dr. Reece has profound theories on what is ailing the United States of America — and what must be done to resolve it. Her theories are deeply rooted in her understanding of mythology and democracy in Ancient Greece.

You just never know how a message is going to be received — or who might receive it.  It was exhilarating to receive this response from Avid Reader Whitney:

I have to thank you for bringing Gwendolyn Reece to my attention. I have interviewed her and will be building a series around that interview.

Turns out that Avid Reader Whitney is also an Avid Writer, with a newsletter of her own — published on Substack, just like Heather Cox Richardson. Here’s a link to Docu-mental: Mapping the American States of Mind,  in which she explains why she was so inspired by Dr. Reece, and what her series is all about.
It’s so much fun to be out and about in the world, making joyful connections. It such a joy to be connected to you!
Wear a mask. Wash your hands. Use the networking energy of the Moon in Aquarius to  make your own joyful connections today.
Thank you for reading this forecast — and sharing it with your friends. Here’s how to contact me. 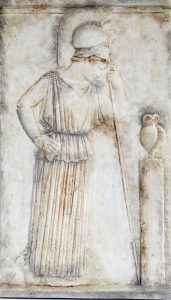