Moon is in Capricorn for the next two days,  so if you’ve got work to do, Capricorn lunar energy is ready to take care of business and deploy resources. Look at me, writing the weekly forecast now — instead of on Monday!

At 11:41 PM ET, Mercury leaves Pisces for Aries, where it promptly offers solutions to problems you didn’t even know existed. The end of Pisces/beginning of Aries is a prominent placement, reflecting ideas and communication — likely from fearless leaders  — that even be a turning point.

If you were born with Mercury in Aries, you may sometimes feel as if you’re ahead of the curve or the pack. Mercury will be in Aries until April 19th. Note that Aries is ruled by Mars, and right now, Mars is in Gemini, which is ruled by Mercury. This rapport may be helpful for people determined to turn words into action, especially since Mars is moving fast all week, pushing boundaries in its effort to do 17 things at once.

On SUNDAY, Capricorn Moon squares the Aries Sun at 6:02 AM ET; the authority of the individual is challenged by the authority of institutions. Moon squares Venus at 10:33 AM ET, suggesting that while your Easter basket may contain goodies with a certain level of status, from an aesthetic standpoint, they may be less than pleasing. Make the adjustment and enjoy the beauty that arrives a little later, as Moon sextiles Neptune at 5:54 PM ET.

From the Forecast for Wednesday:

Feels like a day to make a big visionary statement on a practical plan, championed by your local exalted authority figure

Note that the initiatives proposed by the Biden Administration aptly reflect the humanitarian expansion suggested in the chart for his inauguration. We also see how his agenda reflects the December 2020 Great Mutation of Jupiter-Saturn at 0 Aquarius, right on his “Build Back Better” Taurus Moon. Astrology is amazing.

I thought about these table-turning headlines in light of Tarot Diva Beth Owl’s Daughter’s Card for last week, which was The Tower.

Also reflecting the potential of Jupiter-Saturn in Aquarius for Big Business to take a more humanitarian stance:

UPDATE: on Tiger Woods. You may recall that the chart for the time of his car accident earlier this year had Neptune on the Ascendant. Investigators say they have determined the cause of the crash, but they won’t say what it was, out of privacy concerns — a.k.a. Neptune fog.

Congressman Matt Gaetz (R-FL) under investigation nude photos of conquests shared with colleagues at the office alleged extortion s*x trafficking payments to women using Apple Pay dad may have worn a wire, etc, etc., etc. Yes it boggles the mind, but are we really surprised? Born on May 7, 1982 in Hollywood, FL, Gaetz is a Taurus with Moon in Scorpio, probably conjunct “man on a mission” Jupiter in Scorpio. Seductive scandals, ecstasy and argle-bargle sponsored by Venus in flirty Aries, opposing Mars in Libra at the Aries Point — and retrograde (suggests a prominent double agenda in matters of macho assertion). The Venus-Mars opposition is part of a t-square with wiggy Neptune, pushing boundaries of fantasy and possible fanaticism in righteous Sagittarius. As this Friday’s square between Mars and Neptune approaches, stay tuned for more on this developing story.

UPDATE: on the former guy, presented as a PSA. We anticipated a challenging week, with potentially daring or boundary-pushing setbacks and assertions, and there were plenty, e.g.,  here and here. With transiting Neptune now actively engaged with his Sun and Moon, we anticipate stories of scandal, fog, and a possible wipeout, in the way waves wash away footprints in the sand. You may recall that his campaign raked in millions in the latter part of 2020 — but in the last two months of the year, it had to issue more than half a million refunds totally over $64 million, as “unwitting donors” discovered they had been victimized by an “intentionally deceptive scheme.”  Total refunds for 2020 were $122 million. Details are in the article — don’t let this happen to you. Other organizations do use similar tactics, but this one was especially egregious.  Fun fact:  ActBlue, an organization that collects donations for Democratic causes, is a non-profit organization. In contrast, WinRed, which collects $$$ for Republican causes, is a for-profit company that takes 3% of all proceeds, plus an additional processing fee. Something to consider when you’re giving your money away to a political cause.  Ya learn something every day.

Nancy Reagan’s horoscope is hot right now, which means we can expect her to be hot in the headlines. The horoscope lives forever, doncha know. “The Triumph of Nancy Reagan: How the First Lady helped end the Cold War” is an excerpt from a new biography coming out on April 13th. Who knew? I’ll tell you who knew: Joan Quigley, who was Nancy Reagan’s astrologer at that time. Quigley wrote a book about it 30 years ago, explaining how she worked out the birth times for Mikhail Gorbachev and President Reagan and became convinced that the two horoscopes shared a “breath-taking chemistry” that could change the world. Quigley writes that she was determined to convince the First Lady to get the two men together.

There is no mention of Nancy Reagan’s astrologer in WaPo‘s excerpt. I wonder if she shows up anywhere in the new book.

Mars square Neptune (exact on the 9th) is already sneaking into the headlines:

Gratitude to Avid Reader Jane who followed up on the discussion of rulerships in a recent forecast. In her copy of The Rulership Book by Rex E. Bills, she discovered that cheese, cheese manufacturers and dealers are associated with the Moon (and Saturn and Virgo, too). Moon makes sense, doesn’t it? After all, that’s what it’s made of, right? Green cheese? 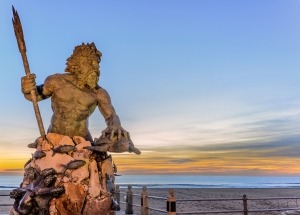 Statue of King Neptune in Virginia Beach, which has seen an increase in aggressive Mars events in recent days.