TGIF and then some. What a week.

I needed to take time away from the forecast for a few days.  I have been focused on Avid Reader Frank. You may recall I mentioned he was one of the very first Avid Readers of this forecast when I started it nine years ago.  If you read my forecast on Facebook @GraceAstrology, you may have noticed Frank’s daily “thumbs up” comments and shares  with his Facebook posse. We should all be so lucky to have a friend as constant and supportive.

Today Frank will be reading this forecast from his new digs among the angels.  He left the physical world on Tuesday night, surrounded by family and friends. It could not have been more peaceful.  Frank was a great humanitarian and advocate, as well as a gifted musician and intuitive. He believed he was here to help others — and he did. I am certain he will find a way to fulfill his Moon in Aquarius mission from whatever space he is in now.

Could we see the potential for Frank’s exit in his horoscope? Absolutely  — well over a year ago.  Over the past couple of months, when he was first hospitalized, I noted his daily progress against the patterns in his horoscope. I saw a potential energy surge — which corresponded with him being moved out of ICU. There was hope. But the energy surge was quickly followed by a serious squeeze — and I suspected this would be reflected by a heavy challenge. It was.  And so he left.

I am certain he is joyfully reunited with his guides and other loved ones on the other side. I am certain he is delighted by his new-found freedom and abilities, unencumbered by the weight of a body. Still, he leaves behind a big hole in the fabric of the physical world.  Only time can repair it.

This was Frank’s idea of a perfect day in New York: 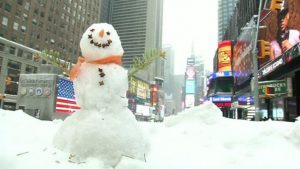 Can you tell that Avid Reader Frank is a Capricorn, driven by Moon in Aquarius, wearing the mask of a Sagittarius Ascendant?

Here is a recap of this week’s patterns — started writing this a few days ago — just couldn’t finish and post:

An Aquarius Moon started the work week, seeking to be appreciated for that which is unique and socially significant. It went void on Wednesday 10:55 AM ET and entered Pisces at 2:40 PM ET.  On FRIDAY (today) the Pisces Moon will be void between  7:27 AM and 11:26 PM ET — yep, that’s right — ALL DAY.   During Moon voids we are advised to stick to routine concerns and roll with whatever twists and flakes derail our efforts to move forward in a straight line. In Pisces, the Moon seeks to works with impressions and ideals, facilitating compassion, empathy and the understanding that we are all part of the same Big Giant Pizza Pie. As it were. Chill and don’t turn molehills of trouble into a mountain. Crises which crop up are often much ado about nothing. Chill!

Over the weekend, the Moon will be in Aries — beginning anew on SUNDAY at 9:57 PM ET — and I’ll post a forecast for that dynamic New Moon then. Meanwhile,  Mercury turns direct on Sunday — at 5:21 AM ET — on what may be an especially rollicking me-me-me day.

But surely there was more going on in the cosmos this week? Yes!  On WEDNESDAY, the Aries Sun was challenged by Pluto in Capricorn, facilitating power plays in world events, including significant news about energy and resources.  That happened at 12:51 AM ET — and we saw relevant stories all over the place. If you have a planet or angle around 21 degrees of Aries, Cancer, Libra or Capricorn, you may have experienced a power play in your own personal world, for better or for worse.  Next Wednesday, the Sun meets up with Uranus., offering an opportunity for yet another shoe to drop.. Watch for stories involving breakthroughs and breakouts, along with significant technological advances.

Humming in the background at the start of the week — and making exact contacts through the rest of the week: lovely harmonies among Venus (women, money, aesthetics, social expression, yin), Mars (yang, action, assertion, sexual desire, aggression), Neptune (vision,  (snake) oil, dreams, healing, spirits of all kinds) and Jupiter (expansion for better or worse):

P45’s personal attorney — Michael “the fixer” Cohen — had a very bad day on Monday. His office, apartment and New York hotel room were all raided by law enforcement agents, on  a warrant requested by the office of the Attorney General of the Southern District of New York. You know what that means, don’t you? It means that Mr. Cohen can’t be pardoned by P45 for any convictions he might receive in a New York State court. P45 can only grant pardons in federal cases.  We don’t have a birth time for Mr. Cohen — DOB is Aug 25 1966 — Virgo with Moon in either late Sag or Capricorn.  If Capricorn, then reasonable to argue that it might be feeling the weight of transiting Saturn right about now. Interesting to note a few things he has in common with his infamous client: 1) a square between Mercury and Neptune, suggesting a highly imaginative approach to hardcore facts; and 2) Mars in Leo, a placement that has an impressive way of getting away with murder. This Mars will soon be hit by disruptive Uranus as soon as Uranus enters Taurus next month.

As for P45, his emotional state is there for all the world to see, suggested by a measurement between his righteously opinionated Moon in Sagittarius and his regal Leo Ascendant. A need to act on impulse — even more than usual — is suggested by another measurement between Uranus (upsets; risk) and Mars (anger; action; warfare). That doesn’t begin to fade until the end of June.  We are advised to be prepared for anything. Mentally, he’s feeling the heavy weight of transiting Saturn opposing his natal Mercury (how he needs to think and communicate). This Saturn is now at a virtual standstill, preparing to turn retrograde on Tuesday, April 17th.  The first Saturn-Mercury hit was on March 30th; the next one will be on May 6th.

UPDATE:  House Speaker Paul Ryan announced he will not run for re-election and he looks forward to receiving his big government pension after working so hard to cut support for everyone else.  Meanwhile, despite his alleged marching orders of “fiscal responsibility,” let the record show that under his watch the U.S. deficit is poised to explode.   Never forget that this man was born with Neptune exactly on the Ascendant. NYT pundit Paul Krugman knows exactly what that suggests — read about the potential of Neptune on the Ascendant here.   Search the archives and you’ll find plenty of write-ups about Speaker Ryan posted over the years.  With his announced resignation from Congress, we can see how his upcoming Jupiter transit to his natal 0 Sag “pie in the sky” Ascendant is likely to play out: expansion, expansion, expansion — free of the shackles of his current position.

UPDATE: Bill Cosby, whose horoscope was first covered back in 2014, continues to be right on schedule. He’s back in court for a  Mercury REtrograde REtrial — on charges of sexual assault. A lot has changed since the first trial, which ended in a deadlocked jury. #MeToo, anyone? And there are big changes in Cosby’s horoscope, too. Transiting Pluto is squaring his Ascendant and opposing his Cancer Sun — and karma cop Saturn is squaring his natal Saturn. It seems quite possible that the jury will see him in a different light. A major Pluto phase has a way of changing one’s perspective. Resistance is futile.   Here is his horoscope, using an Aries Ascendant. It’s been tracking quite well since  2014.

Thank you for reading this forecast — and for sharing it with friends. Stay tuned for much, much more.