By the time you read this, the snow falling on parts south and west should have made its way north to NYC. A snow day — or two — would be expected to disrupt travel, but with Mercury retrograde, you can put any delays to good use. Have you been reviewing your progress since the last Mercury retrograde, which ended in November? Are you reconnecting with past projects, friends and colleagues? Or are you just chilling out?

Chilling may be challenge on Monday morning, given the square between physical Mars and the Sun. At 6:25 AM ET, Moon enters Libra, seeking smooth things over with a focus on fairness and balance in relationship. At 9:05 AM ET, Venus leaves Capricorn for Aquarius, where values, money, social expression and art need to be less concerned about climbing ladders of status and success;  more concerned with being accessible to all.

As we move through this week and next, Venus will make contact with Saturn, Uranus, Jupiter and Mercury (twice). Thus we’ll see a lot of headlines about who, what and how we need to love — and why we need to be more ambitious, innovative and expansive with our aesthetic ideals. The markets should be interesting to watch.

For today, the Libra Moon’s people-pleasing drive is well-supported. Go about your business — but triple check the fine print and wiring instructions.

Avid Reader Stephanie wants to know if I am offering a few paragraphs of personal insights on what this Mercury retrograde means in your own personal horoscope. And yes, since Avid Reader Stephanie asked, I would be delighted to. Toss $46 into my Cosmic Tip Jar — as a Joyful Random Expression of Appreciation — and email me your birth data — time, place and date — if I don’t already have it. I will send you my thoughts in a day or two.

As for the rest of February, major highlights include:

I have been resisting joining the scores of astrologers looking at what we know about the horoscope of gun-toting Congresswoman Marjorie Taylor Greene. She’s been all over the news, and especially during last week’s emotionally extreme Venus-Pluto conjunction and potentially fringe-to-the-max Sun-Jupiter-Uranus square. If you still don’t know who I’m talking about, here’s the cold open from the weekend’s  season premiere of SNL. Comedy is a coping strategy for pain.

Anyhoo, Greene made news last week when dozens of social media posts from the past came to light. There she was stalking and harassing a teenage David Hogg (survivor of a deadly school shooting in Parkland, FL); there she was declaring that the California wildfires were caused by “Jewish space lasers.” This week, Congresswoman Cori Bush moved her office away from Greene’s because she and her staff were being harassed by the “mask-less” staff of MTG. Apparently there is no HR department in Congress, and Greene was rewarded for her specialness with an assignment on the House Education Committee (she believes the Parkland shooting and 911 were hoaxes).

The scandal no one is talking about (says Ryan Calo on Twitter), is how Space Force missed the giant laser pointed at California.

Naturally, astrologers were curious to know what was going on in Greene’s horoscope — not that we really had to look. We already know —  based on her words and deeds — what we’re going to find. She has a bewildering sense of self and her place in the world, right? Sun-Neptune opposition. She is reckless, disruptive and a fierce advocate for guns and violence. She appears to have funded her campaign in part with Covid relief funds. Mars in a t-square with Venus-Uranus, supercharged last year. Her Mars is in Cancer. Her actions need to support emotional/home security. She has Venus in Aries. She needs a crusade. This need is supercharged in 2021. She has one pattern in common with Speaker Nancy Pelosi: an exact square between Saturn and Pluto, which suggests extremes of ambition and discipline. Born on May 27, 1982 in Milledgeville, GA, Greene is a Gemini, probably with Moon in drama queen Leo. Current patterns in her horoscope suggest extreme efforts based on likely unreasonable plans and — according to astrologer Noel Tyl, “nefarious scheming to exalt the ego.”

Unpleasant as it may be, I feel we need to stay focused on politics, if we are seriously interested in preserving the democratic ideals set forth in the Declaration of Independence and in our Constitution. In her latest post, historian Heather Cox Richardson addresses the divide within the Republican party — and between so-called “business Republicans” and Democrats. She explains how — having been voted out of power by the people, Republicans in assorted state legislatures are now trying to make it even harder for the people to vote. With these recent developments, we can see how the stress in the U.S. horoscope is likely to manifest in real life over the next two years.

In other news (reflecting planetary patterns, especially today’s square between warrior/macho Mars and the Sun):

Reflecting the “pocket full of posies” (defense against the plague) symbolized by the Sabian Symbol for the current Mercury retrograde (see the last forecast), the NYT published an extremely lengthy and detailed piece that answered all questions about the Covid vaccine!

UPDATE: on the former WH Occupant — and only because I wrote in a prior forecast that we’d see notable action in his horoscope on the 27th and through that week. Transiting Mars and Jupiter activated his Pluto (power and resources); we’d expect extremes — possibly pushing his luck at great loss. Late Friday, it was announced that five of his defense attorneys quit. His new lawyers are apparently better-equipped to handle the case, given that their combined experience includes defending “alleged” mobsters, advising Jeffrey Epstein and declining to prosecute convicted sexual predator Bill Cosby. The impeachment trial is scheduled to start on February 9th — will there be a Mercury retrograde delay? I don’t know, but the next big date to watch is February 18, when Pluto opposes his Venus (professional status; siblings; communication) for the first of three passes. Meanwhile, February 17-19 are dates to watch for President Biden.

…the snow is now falling heavily in NYC and the city is closed for the day. Yay! If you’re in the mood for a show, I recommend In & Of Itself. It premiered last month on Hulu, and all I knew when I watched it on the 22nd was that Stephen Colbert produced it, Frank Oz directed it, and that it addressed questions of “identity.” And since astrology has a lot to say about questions of identity, i.e., why you are the way you are, I just had to check it out. I don’t want to tell you anything more other than 1) just watch it; and 2) there are moments in this show when people feel truly seen — and these moments are quite empowering. If you don’t subscribe to Hulu, you can get a free trial for 30 days.

Thank you for reading this forecast. Here’s the 411 on personal consultations. Here’s how to support the work it takes to bring you these insights via email once or twice a week. Avid Reader Diane tells me that I simply must include this message every time I write, and since she has a black belt in aikido, resistance is futile. 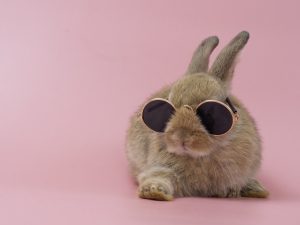 Did someone say, “Rabbit, rabbit?”