The buzz continues this Friday, driven by the Moon in blah blah blah Gemini, seeking to be the cleverest kid in the room. How clever a kid can be on a morning that started with the Moon challenged by foggy Neptune (at 8:59 AM ET) remains to be seen. However, the quest for a big, righteously sloppy idea continues through lunch, courtesy of 1) a trine between Venus and Neptune and 2) a meet-up between Mercury and Jupiter in “sky’s the limit” Sagittarius.

Meanwhile until 5:23 PM ET, the Sun is at the last degree of Sagittarius, pushing boundaries with prominence for all it’s worth. Then a more sobering executive authority takes the reins, as the Sun enters Capricorn. This is the Winter Solstice — a turning point. Now is the time when light begins to push back against darkness — and prevail — at least in the Northern Hemisphere. It’s also time for practical application of Sagittarian ideals — most appropriate in corporate and government institutions.

This Solstice sets the tone for the next three months. A quick glance at the chart set in Washington D.C. has: 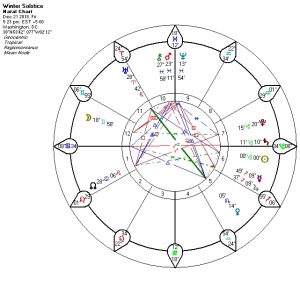 If you wanted to see how the Winter Solstice is likely to be reflected in events in other countries, run a chart for the capital of those countries — e.g., Paris, Rome, etc.

On SATURDAY, Moon goes void at 9:23 AM ET until 11:28 AM ET, when it enters Cancer. A Cancer Moon seeks emotional and homeland security. Under a Cancer Full Moon, the need for compassion and nurturing challenges the decidedly unemotional, status-seeking ambition of the Capricorn Sun. This lunation sheds light on the conflict with exceptional prominence, as it happens at the Aries Point: 0 degrees Cancer and 0 degrees Capricorn. In your own personal world, if you have a planet or angle around 0 Cancer, Capricorn, Aries and Libra, you are more affected than most.

The Sabian Symbols for the Full Moon are faaaaaaascinating and apt, as always. Ready? Stick these into your newsfeed and smoke ’em! For the Capricorn Sun: “An Indian chief demanding recognition.” For the Cancer Moon: “A furled and unfurled flag displayed from a vessel.” Hmmm….two flags — one clearly visible; the other hidden. Who is really giving the orders on this ship, eh?? Things may not be as they seem.

Sabian Sage Blaine Bovee observes that “an Indian chief does not normally have to demand recognition, suggesting [it represents] an emergent power.” He suggests we apply these two Symbols with a mind to “issues of personal power and the dynamics of the process between furling and unfurling. Think of power potentials under wraps; bold displays of power. Here’s more on that Indian chief; here’s more on those two flags. Action on whatever illumination is released in this Full Moon is likely to be triggered on New Year’s Eve, when Mars will be at 0 Aries — the Mother of all Aries Point degrees.

Moon continues in Cancer on SUNDAY, mostly with comfort and joy during waking hours. Feel free to finish your holiday shopping, as there is no Moon void to flake you out. However, at 8:23 PM ET, Moon makes its weekly clash with ruthless Pluto, suggesting a potential emotional catharsis or power play.

MONDAY begins with an electric buzz, as Moon squares rebel Uranus at 9:50 AM ET — then goes void until 11:58 AM ET. The rest of the day is driven by Moon in love love love-me-do Leo. Christmas Eve is ripe for music and sugarplums dancing in your head, as Mercury (how we need to think) squares Neptune (fog and other intangibles) at 7:33 PM ET. You might want to double check the directions to wherever place you’re heading that night.

In other news, while I have not increased my rates in three years, I will be raising them on January 15th. I will send a reminder after the first of the year so you may purchase 2019 reports, consultations and gift certificates before prices goes up. It is a joy to be of service!

Last time we wrote about P45 was on December 5th:

…who seems to get crankier and crabbier with every passing day, and not just because that P45 baby blimp followed him to Buenos Aires. Or that Vladimir Putin and MBS high-fived like total besties at the cool kids table, leaving the Donald scowling all alone. Same scenario today at National Cathedral. George W. Bush did not offer P45 a piece of candy. Well, he does have Mercury (how he needs to think) in Cancer (the Crab). And karma cop Saturn is just days away from the third opposition to that Mercury.  How many days? Five. Depression much? Keep an eye on Dec 9-10, followed by 11 days of angry outbursts and action.

…11 days of angry outbursts and action, eh? Put that one on transiting Mars at 16-22 of Pisces, where it triggers his reckless Uranus, toxic South Node and eclipsed Sun-Moon opposition.  In case you haven’t heard, he’ll be “proud” to partially shut down the government if Congress won’t give him the billions he wants for his wretched border wall. WaPo has a countdown clock on its website; the deadline is midnight tonight. You know what that means? It means a potentially ridiculous delay on getting my passport renewed, as the State Department might be closed. But that’s OK, I’m willing to wait, so long as that wall exists only in his mind — and Robert Mueller’s office is exempt from any shutdown (it is).

Meanwhile, he’s impulsively pulling troops out of Syria and Afghanistan — but that’s OK, because Russia, Iran and Turkey are happy, right? Makes ya think about the two flags in those Full Moon Sabian Symbols, doesn’t it? Defense Secretary Jim “Mad Dog” Mattis thought about it, and submitted a scathing letter of resignation that’s left most sensible minds worried sick about what might happen next. More crankiness around Dec 30th – Jan 2nd, suggested by patterns in his horoscope.  We’ll see a repeat of this month’s “days of angry outbursts and action” pattern at the end of April, when Mars will be at 16 – 22 degrees of Gemini…and again in mid-September, when Mars will be at 16 – 22 degrees of Virgo.  We should also mark the last ten days of March and August 6 – 17th for more hotheaded Mars outbursts.

You know who else is triggered by transiting Mars at 20-22 degrees of Pisces, Virgo, Gemini and Sagittarius? Barack Obama, whose natal Mars is 22 Virgo — right on the U.S. natal Neptune and square the U.S. Mars at 20 Gemini. How has he made news over the past several days? By playing Santa Claus (action in service to others) at a local children’s hospital. So easy for him to do with his natal Venus at 0 Cancer (he can’t help but be known for caring and nurturing). We’ll see more stories about his nurturing nature in the wake of the Full Moon. Meanwhile, a stretch of highway near Occidental College was named in his honor. Mars refers to cars. Astrology is amazing.

Alan Dershowitz’s horoscope  is also triggered by planets at 20-22 Pisces, Virgo, Gemini and Sagittarius. He has Neptune at 20 Virgo and with transiting Mars opposing his Neptune this week, suggesting a potentially scandalous provocation. What happened? He denied allegations that he received sexual favors from women under the direction of sex offender Jeffrey Epstein. I’m not convinced we’ve heard the last about this — let’s wait until transiting Jupiter squares that natal Neptune in mid-February-ish.

In other news, who remembers that Beth Owl’s Daughter’s Tarot Card for all of 2018 was Justice? It was — and this week, Merriam-Webster announced its pick for 2018 Word of the Year: Justice.! And in fact, it has been heartening to see many stories reflecting true JUSTICE — even as they fly in the face of the craziness of these “interesting times.” For example:

Meanwhile, reflecting yesterday’s harmony between the Sun and Uranus: “Science Says: A big space crash likely made Uranus lop-sided.”   I’d expect to see this next story on a square or opposition, but “Drone Sightings Cause Disruption at Gatwick Airport”  does feature the Uranus in Aries theme of robot warriors in flight — taken to Sun in Sagittarius new heights.

Finally, Avid Reader Kay is back from her trip abroad. How did the rest of it go, after her unexpected layover in Vienna? Exactly as anticipated!! “Fantastic trip — will fill you in later!!” she writes. So happy she thought to call for insights before setting off on her journey.

Thank you for reading this forecast — and for sharing it with your friends. They are awesome — and so are you!