Tag Archive for: venus mars conjunct in leo in the news 2021

The Moon is in Cancer, driving the past two days with a need for emotional and home/homeland security. Talking about feelings and other heart-to-heart experiences are supported. If there’s no one around to talk with, fix yourself a nice meal at home –whatever makes you feel nourished and nurtured.

We are in the balsamic phase of the lunar cycle — i.e., a dead Moon. Time to wrap up projects from the current cycle and contemplate your intentions for the next one. The New Moon in Cancer happens at 9:16 PM ET. But before we talk about that, let’s review the week so far.

Last week, Mars in Leo drove the headlines, first opposing Saturn and then squaring Uranus (militant controls, followed by disruption). This week, Venus in Leo followed in Mars’ footsteps, opposing Saturn on Tuesday at 10:36 PM ET, and squaring Uranus on Thursday at 3:25 PM ET. Venus refers to money, values, women, and aesthetics. In opposition with Saturn, we expect stories about controls, cuts and losses, women of steel, art, and commerce. Squaring Uranus, we expect stories of unconventional women and volatility in the markets, for starters. For example:

A pause, while we consider the forecast for today’s (Friday’s)  New Moon and the rest of the week. Light a candle, make a list, and set your intentions for the next lunar cycle. The New Moon happens at 9:16 PM ET.

The Moon functions well in Cancer, the sign it rules. Here it seeks to fulfill a need for emotional/homeland security (as I said before). Y’know, core foundational concerns. Are you standing on solid ground? Where is your home? Tell me about your family, your mother, your ancestors. How are you being nourished and nurtured? How are you nurturing others? 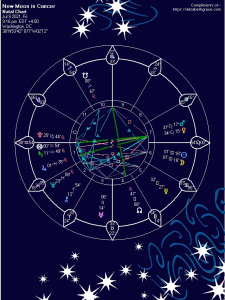 Back to The Forecast for the weekend:

UPDATE: on Pope Francis, who had colon surgery last week. This is not surprising, given the tension his 12 Aquarius Moon is under, recently squared by Saturn and Uranus, with more hits on the way this year. As Saturn retrogrades back through Aquarius, it will also conjoin Venus, ruler of his Midheaven (career status). We anticipate a streamlining or an ambitious advance in professional concerns.

If you haven’t seen the NYT’s 40-minute video timeline of the January 6th insurrection, you simply must, must, must.

God Save the Queen…for allowing the public to picnic in her backyard for the first time ever. All hail Her Majesty’s Leo Moon!

Signs Venus and Mars are on their way to a hook-up in Leo:

You did get vaccinated, right? Covid cases are on the rise again (as anticipated), mostly among those who haven’t been vaccinated, and the Delta variant is particularly nasty and contagious. That’s the PSA portion of this forecast. Get vaccinated and even if you are vaccinated, don’t be so quick to take off your mask. I’m still wearing the fabulous handmade mask (pictured below) Avid Reader Marianne sent me several months ago. Maybe she can make one for you, too, if you contact her via her Etsy site.

And while we’re in a shopping mode, there’s a book Lieutenant Governor Dan Patrick doesn’t want you to read — so much so that he is responsible for the cancellation of a book event at Bullock Texas State History Museum three and a half hours before it was supposed to start (thank you, militantly controlling Mars opposing Saturn). The book is Forget the Alamo, and I confess I didn’t know much about the Alamo, to begin with, so let Heather Cox Richardson explain it all for you. File it under the bonkers transit of Neptune squaring the U.S. Mars-Neptune square, combined with transiting Pluto opposing the U.S. Mercury (attempting to force a transformation of facts).

Ya learn something new every day, right? 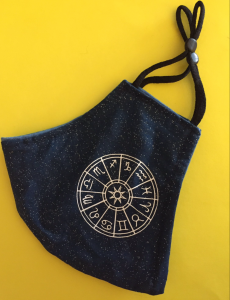